Written by Collective Troll at 11:52 AM
I seem to have a penchant for finding and ripping wax of odd sized cards. Today’s Troll-Edition of a Pack to be Named Later is very much odd-sized. It is 1994 Fleer Extra Bases, an oddly oversized card that measures 2.5” x 4.7”. This is the Premiere Edition of this series and it might have been their only stab at it.

Each pack contains 12 cards and each pack also guarantees 1 limited edition insert card in each. The insert odds range from 1:3 to 1:8 and there are a total of 4 different limited edition subsets. There are 30 Game Breakers, 20 Rookie Standouts, 20 2nd Year Stars and 10 Major League Hopefuls. I tried to make a size comparison between these Fleer Extra Bases cards and other oversized cards. 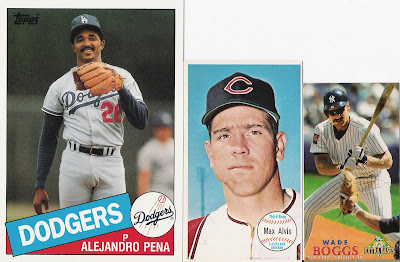 Shown are the 5 x 7” 1985 Topps Super and the 3-1/8” x 5-1/4” 1964 Topps Giants. Odd sized and short lifespan aside, here is what I got… Each card has a large photo on each side. I didn’t scan front and back of all 12, but every card I pulled had a different image on each side. The back has a short bio or fun fact, some pertinent info and stats from the players last 5 years. 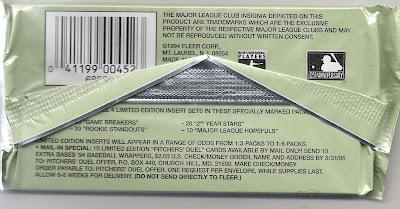 One thing I did find odd about this grouping was that out of 12 cards 4 of them were catchers (1/3) and 2 of those catchers were on the Mets. Hmm… Okay, with the surprise spoiled somewhat, here is what I pulled: 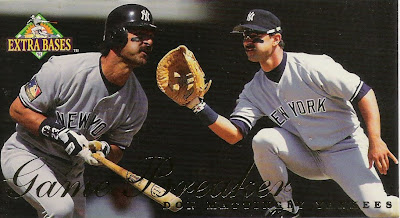 The insert card was the first one in the pack. It is from the 30 card Game Breakers subset, #17 of Don Mattingly. This is by far the best looking card in the pack. The composition with the two player views facing each other and the script looks much like Flair cards of the 90’s. The back has a longer bio and no stat line. I LIKE this card. Now, onto the base. I don’t like the base near as much as the insert. The logo is funky looking, the color scheme is odd and many of the photos just aren’t sharp or properly saturated. It’s like they took images ready for a standard card and enlarged from that. 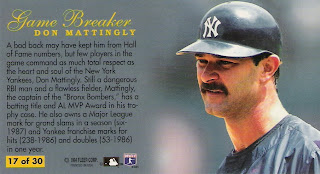 The angles look good, but some are muddy and soft focused and grainy. Okay, here are the scans, you be the judge… 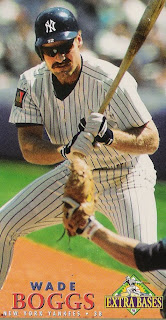 First out is a Hall of Famer, card #128 of Yankees third baseman Wade Boggs. 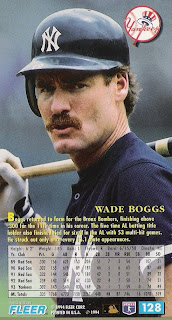 Action batting shot on the front close up on the back 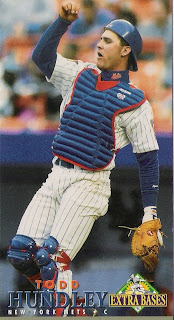 . Card #318 of Mets catcher Todd Hundley, the first of 4 catchers in this pack. 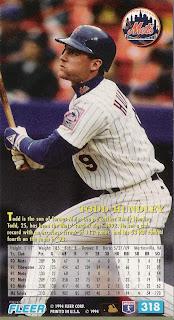 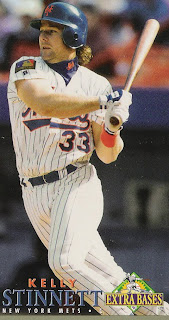 Next is card #16 of the Rocket, Roger Clemens. 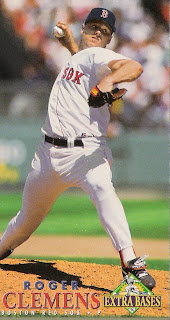 Following the Rocket is card #250 of Rockies pitcher Marcus Moore. 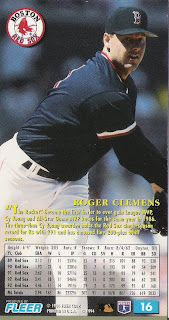 I don’t remember Marcus Moore at all. 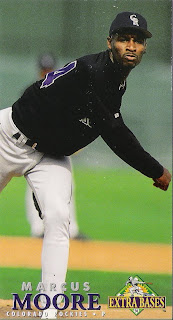 His career lasted 3 seasons as a reliever. He was 3-1 with a 6.84 ERA for the Rockies in ’93. Next is card #281 of Astros catcher Scott Servais. He has a poorly cropped batting shot on the front and fielding shot on the back. 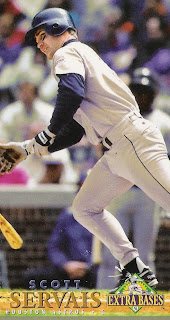 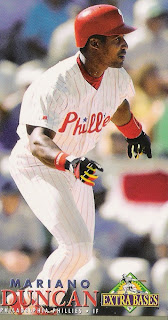 Duncan started the All Star game for the Phils in ’94; it would be his only career AS appearance. Next up is the 4th catcher in this pack, card #125 of Matt Walbeck of the Twins. 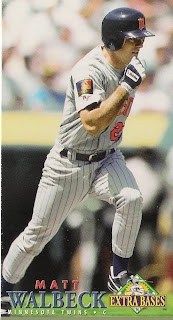 In ’94 Walbeck led the AL when he threw out 42 would be base stealers. 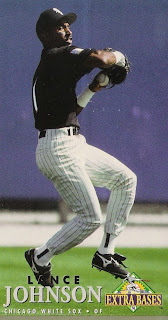 Lance Johnson, the One Dog is next on card #49. 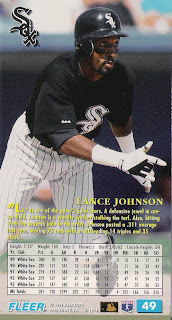 In ’94 Johnson led the AL in triples for the 4th consecutive year. 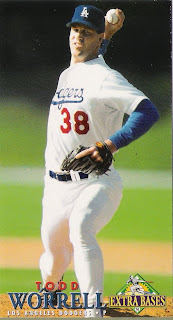 Next is card #298 of Dodgers closer Todd Worrell. The photo on the front is murky and blurry, but the shot on the back is pretty sharp. The 1986 Rookie of the Year saved 256 games (27th All Time) over his 11 year career. 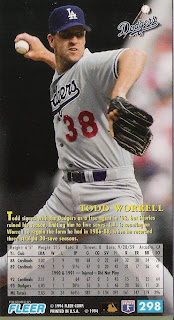 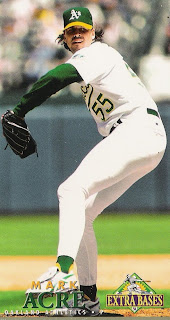 The final card in the pack is #143 of Oakland A’s pitcher Mark Acre. Acre also never started a ballgame, but he only saved 2 games over his 4 year career in Oakland. That is the pack. I have 4 more packs of this product, is anyone interested? Go Rays! Thanks for reading. Troll out.

I found a bunch of these at a local card shop and thought they were great. good star value - cool inserts and sharp photography. the oddball size has relagated these to the bargain bin I am sure.

Interested? Of course. It beats another pack of 2010 Topps.

Basketball had at least 3 products of this size. 2 years of Fleer's Jam Session and Classic put out a college hoops set with these dimensions too. They were a pain to store, but kind of a fun novelty. The good thing about them is they would fit in card sleeves and pages - if you didn't mind them sticking out.

If there's a Maddux in the other packs, I'll trade for it.
--Jon