1993 Donruss Masters of the Game 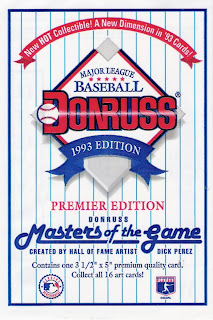 This means that fans of A Pack to Be Named Later will be seeing a lot of me in the coming days. It wasn’t easy choosing what to rip first, but I went with the bigger is better philosophy and tore into the packs of 1993 Donruss Masters of the Game. These oversized packs contain one single 3-1/2 X 5” card from a set of 16 different players. This is the Premier Edition of Masters of the Game. 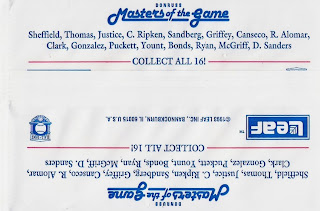 I had never heard of this release before and I do not know if there ever was a second edition or not. The outside of the pack touts these as a “New HOT collectible! A new dimension in ’93 cards”. It also mentions that these were created by Hall of Fame artist Dick Perez. Here is what I found when I ripped the first slim pack. SCORE!!! 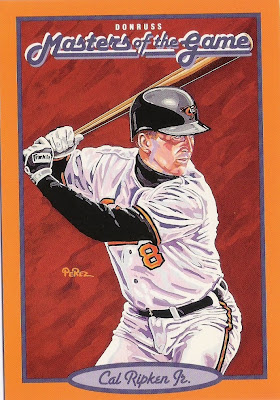 Cal Freaking Ripken Junior!!! Yes! I still get excited whenever I pull a card of Cal Ripken. He was never a favorite player of mine, but his classiness adds to his timelessness. The dude is classic. As promised the front of the card has Dick Perez portrait of the player. Diamond King style without being a Diamond King. 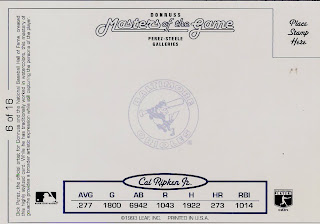 The back of the card is a postcard, kind of like his Hall of Fame plaque postcards. I wonder if anybody who ripped these mailed them off? The back of the pack shows the checklist of players offered, Maybe if I had pulled Jose Canseco I would have mailed it away… I can’t say that I would have collected these back in ’93, but I like them now. The set has 16 cards in it and I have 8 packs, so I probably won’t be chasing the set now either. After my luck with the first pack I figured I would roll the dice on another and see if I could yank a Robin Yount, Kirby Puckett or Will the Thrill… Nope, got Juan Gonzalez. 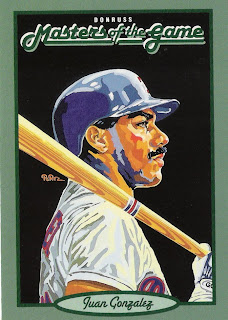 Could have been worse. Gotta love Dick Perez art. Go Rays! Troll out.

Email ThisBlogThis!Share to TwitterShare to FacebookShare to Pinterest
Labels: 1993 Donruss Masters of the Game

I definitely have to track down a box of these now. This is the kind of oddball stuff that I love.

Those backs would be perfect for autographing.

I'm sad that there's no Ozzie Smith in this set.

I have a complete set of these plus several duplicates.
If you are still interested, make an offer individually or full set.
RALgolf1953@yahoo.com

I have Nolan Ryan, Frank Thomas, Barry Bonds, Fred McGriff, Roberto Alomar...if anybody is interested in purchasing these email me awmassey@gmail.com