Written by Collective Troll at 11:14 AM
It’s a new day and time for another Troll-rip on a Pack to be Named Later. The subject of this one might be a bit shocking, it was to me. I am strictly a baseball fan and baseball card collector, but when I decided to contribute to this blog I also decided that I would rip one pack of ANYTHING that I could get my hands on that hadn’t been ripped here before, so… This is a pack of 1992 Skybox Team USA Basketball. Yep, 1992 was the year of the Dream Team. Some called it the “Greatest Team Ever Assembled”. Yeah, they were amazing. Scottie Pippen, Chris Mullen and Patrick Ewing-I keed… 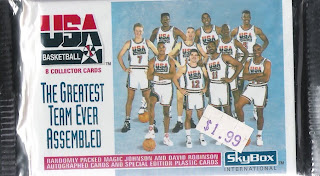 Anyway, the folks at Skybox were somehow able to create a 112 card set out of these 10 guys. Of course that means about 20 different cards of Magic Johnson and Michael Jordan. The thing that added a bit of excitement to this one was the chance of getting a Magic Johnson or David Robinson autograph. The pack doesn’t list odds, but I have read before that they are inserted one per box. Of course I read that in descriptions of folks selling boxes for big bucks, so I don’t know if I believe everything I read. Let’s rip this baby and see if I pull a Magic Johnson auto shall we? Here is what I got:
First card out is Michael Jordan, what are the odds? 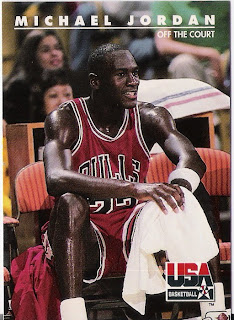 Since Jordan cards make up nearly 10% of the set I would say pretty good. Here is card #41, a great shot of His Airness sitting. Next up is card #49 of Karl Malone. 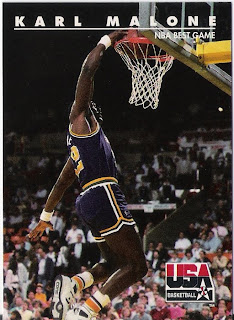 A decent action shot of the Mailman delivering (I couldn't resist… ) Up next is card 57 of Golden State’s point guard Chris Mullin. 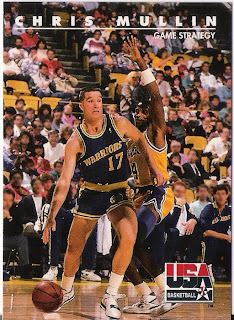 The back of the card calls Mullin a “miniature Larry Bird”. 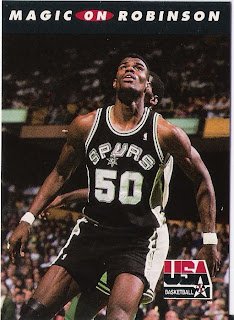 That’s cool I guess. Card #109 shows David Robinson on the front, but has a photo of Magic Johnson on the back sharing his opinion on the Admiral. 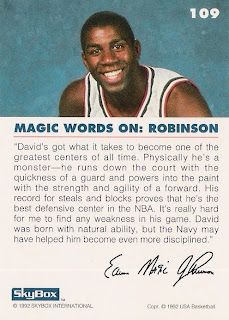 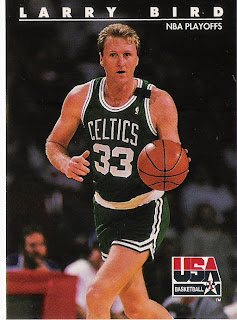 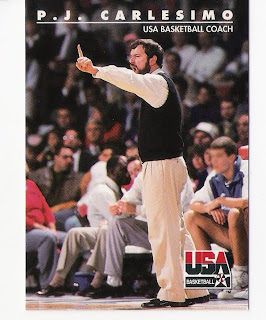 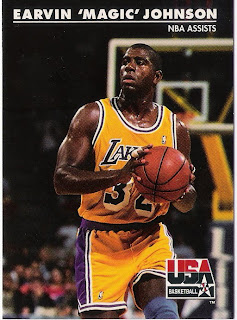 Earvin “Magic” Johnson arrives on card #36 without an autograph. 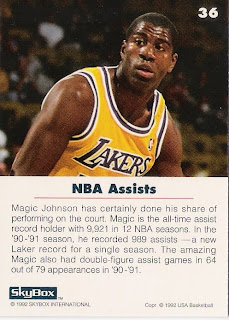 He has a pic of himself front and back. 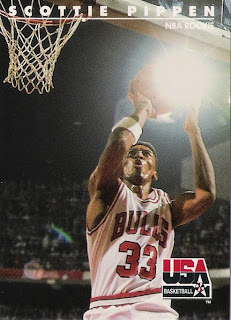 The final card is Mr. Second Fiddle Scottie Pippen on card #65. That’s it. No autograph, nothing I have any interest in keeping either. It was an interesting rip for a non-basketball fan, but I am over it already. Who wants ‘em? If I had to state one beef with this set it would be that the pack advertises Team USA and although it does include players from that team they are all in NBA garb. That and I would have liked to get a Magic Johnson autograph... Be the first to claim these cards here and then send me an email at bacontowne at yahoo dot com. If you wanted to be like me and purchase your own pack of ’92 Skybox Dream Team there are sellers on the ‘Bay who would gladly accommodate you. For a mere $4.99 plus 3 bucks shipping you can own a pack yourself. I have the listing “watched” just to see if anyone "bites"…I love this hobby and the habits it has formed. Go Rays! Troll out.

I already have the Jordan, so I'll let someone else claim dibs.

If I remember correctly, this set came out not too long after the team was announced, but at least a month before any Olympic games were played, so they wouldn't have any pictures of them in USA garb to use. Still, I absolutely love this set - an excercise in effective simplicity and minimalism.

One of my favorite sets ever, of any sport. I was obsessed with these cards. Didn't the players come to life in the commercials? I don't remember exactly, but it was the commercials that got me hooked.

I have a complete set of these cards.
I am looking to sell them, where would I go to sell them? I also have tons of other cards lots of older cards both base ball and basket ball.

i have a unopened box of original 1992 USA OLYMPIC BASKETBALL CARDS from SKYBOX, 36 packs 8 cards per pak
i want to try and find out what its worth

I just opened 4 boxes of them.2 plastic cards no autos pretty disappointed.