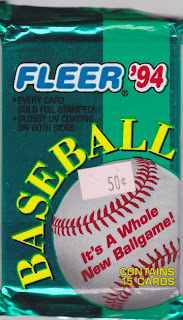 Having never seen a single card from this set until a couple of years ago, I still feel confident that 1994 Fleer is among the best Fleer designs of the '90s. Quality-wise, Fleer didn't do a whole lot more than what they did with their 1993 set, but this set was probably a bit more appealing to the eye. 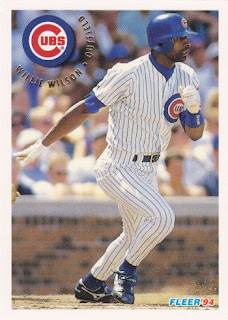 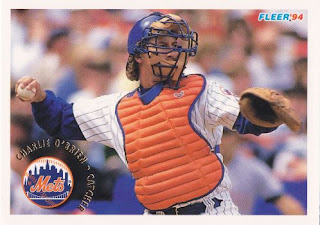 574 - Charlie O'Brien (There are some pretty nice horizontal photos in this set.) 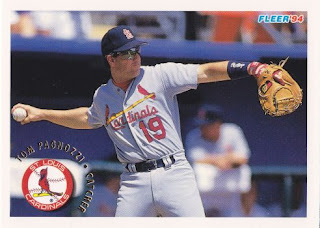 641 - Tom Pagnozzi (Pagnozzi was an all-star at some point, which is a little strange.) 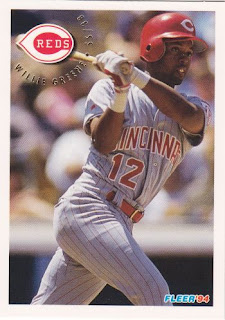 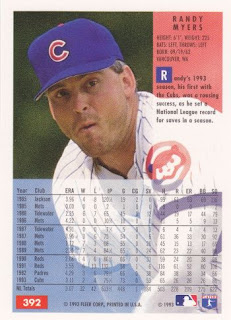 392 - Randy Myers (Myers was a great reliever for quite awhile. Unfortunately, he took a spin with the Cubs. 53 saves?!) 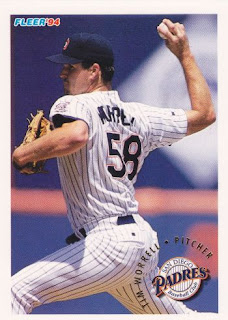 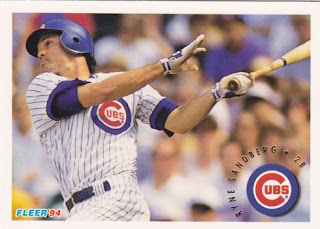 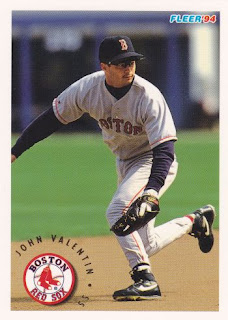 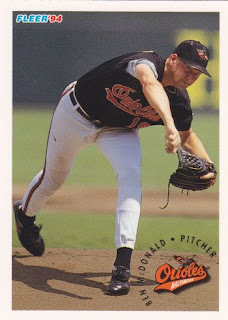 8 - Ben McDonald (I often hear about McDonald and Todd Van Poppel from people trying to make comparisons to Stephen Strasburg. I don't remember Van Poppel having decent minor league numbers, but McDonald was doing something right at least for awhile.) 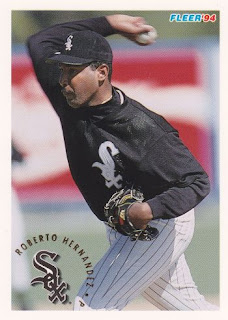 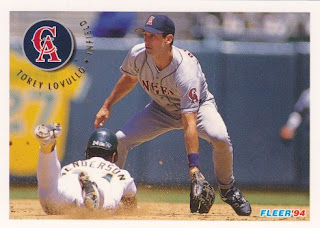 63 - Torey Lovullo (Lovullo is waiting for the ball to show up while Rickey Henderson steals another base. He's probably still waiting.) 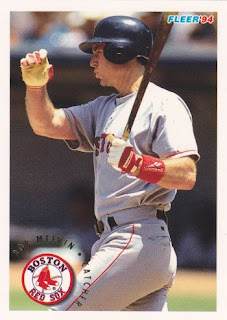 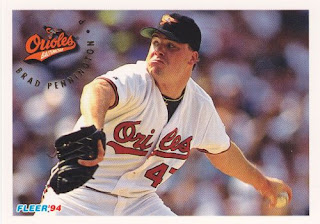 15 - Brad Pennington (This is proof that not every horizontal action shot is a good one.) 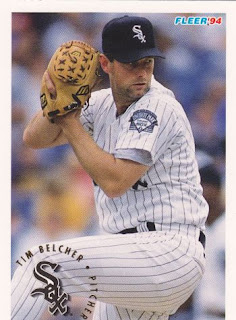 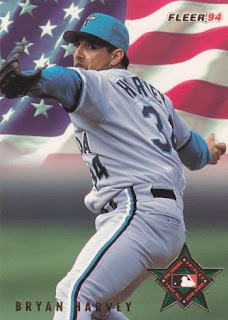 40 of 50 - Bryan Harvey All-Star (There's one insert in every pack of 1994 Fleer, but there's no indication on the pack wrapper as far as what inserts are tougher to find than others.)

Very nice...I almost stood up to sing the National Anthem when I saw the All-Star card with the Flag backdrop.

This is a nice set. This was during my sabbatical from collecting (1994-2007) so I hadn't seen these before.

The last fleer set I bought was 1992. There cards became thicker, glossier and more expensive during the early 1990s. This set was kind of bland to me. For some reason 1995 Fleer and 1997 Fleer (the matted cards) were more interesting

For the heck of it, I looked up the Lovullo / Henderson steal. Probably on June 30, 1993 in Oakland. The catcher was Greg Myers. The pitcher was Russ Springer (!!!) Lovullo didn't just wait, he had to go chase it down as there was an E2. A's win 5-4.

Brad Pennington looks like he wants the finest meat and cheeses at the buffet.

Great set with great photos, nary a mugshot to be seen. How did they ever go from this clean, uncluttered elegance to the nightmare acid trip of their 1995 set?

I loved that set back in the day since it had one insert per pack. Sealed boxes (even jumbos) can be had for cheap on eBay. I thought about grabbing one for a group break sometime in the future, but was unsure if there would be any interest.

I was thinking about looking up box prices today, actually.

I can't believe Russ Springer is still around...

Nice pack. That all-star insert is suh-weet. And three Cubbies is nice.

Isnt technology wonderful? You can see a picture on a card from 18 years ago and look up that particular play to see what was going on. Freakin Sweet.

This set is sweet too. Their insert-in-every-pack revolutionized the hobby and it might not be the same today if this set didnt exist. I remember seeing the ad in Beckett for this set when I was 8 years old and can still recall that feeling of excitement and anticipation to open the first pack.