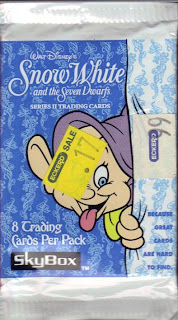 In 1995, Skybox teamed up with Disney to release a set of cards based on Snow White and the Seven Dwarfs.  Each pack has 8 cards an dthere is a 1:18 chance of finding a special foil insert.  As you can see from the markdown, these were not hot items in Eckerd Drug stores. 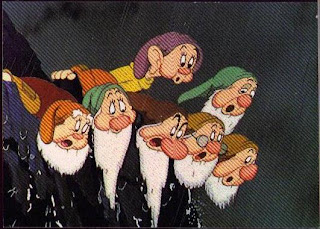 The cards are borderless, full color prints and look much better in person than in scans.  Some cards feature scenes from the movie.  On th eback, the scene depicted is described and is shown with a different still near the same part of the movie.  The card numbers on the back are framed in the "mirror" from the movie. Nice touch. 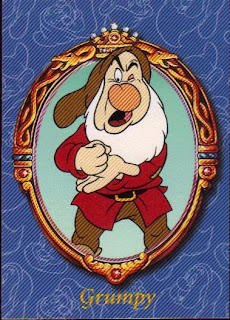 Other cards feature specific characters in the "mirror" frame.  The back of the card gives some insight into the character depicted on front. 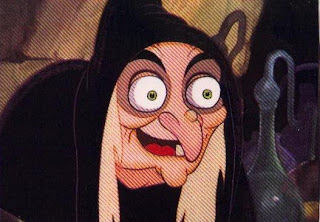 This card shows what happens when evil people go bad.  Look, I don't know about you, but I wouldn't take anything from THAT old lady.  You would think a witch could have at least made herself look like a NICE old lady.  Snow White is kind of an air head, I think. 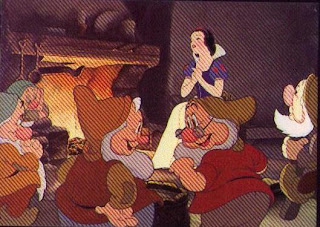 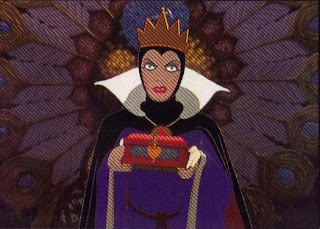 What's in the box?  Well, nothing yet, but old witchy-poo there wants Snow White's heart in it.  Man, Disney had a dark side, eh. 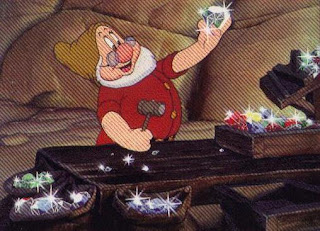 Checking for 'good' diamonds.  I admit, I have NEVER seen the movie. I have no idea why these guys go 'heigh ho-ing' every day to get diamonds.  But, I guess someone's gotta do it. 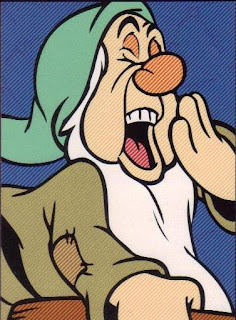 These are trivia cards and feature a stylized cartoon version of various characters.  The back has a trivia question: What was so unusual about the special 1939 Academy Award presented to Walt Disney for this film? *Answer below. 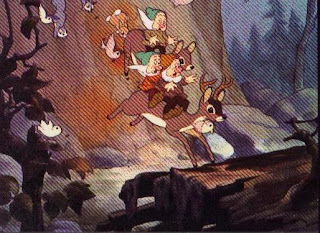 The final card in the pack shows the little guys riding deer through the woods.  No, they don't get shot. That's in Bambi.
*Trivia answer? The award was presented by Shirley Temple and consisted of one large award with seven 'dwarf' awards to go with it.  How quaint.

I chuckled at the seventeen cents price tag.