Written by deal at 9:15 PM
A few weeks back I posted a pack of 1988 Sportflics in this space. Today we are going to take a look at a younger sibling, 1989 Sportflics. The 88 pack break was pretty successful with 2 of the three cards in the pack containing Hall of Famers. Unfortunately the 1989 pack was not as good a vintage: 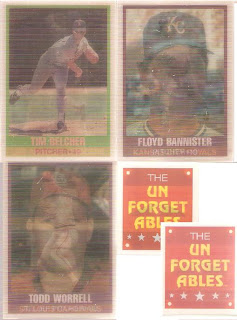 Pretty blah group. Although Belcher and Worrell did both get to play in the World Series, Belcher actually earned a ring with the 1988 Dodgers. Each card feature a head shot and 2 in action photos. All three cards are of pitchers and the two action shots appear to be from the same pitch.

The mini bio cards are a step down from 1988 as they no longer feature a team insignia. 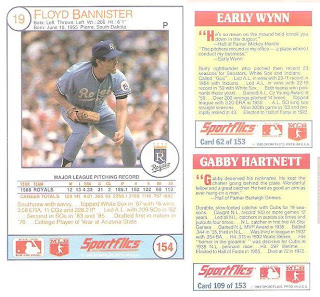 The Two Mini Cards feature Early Wynn and Gabby Hartnett. I think you can make these out if you click and enlarge them. Perhaps someone should hand the Early Wynn card to A-Rod. 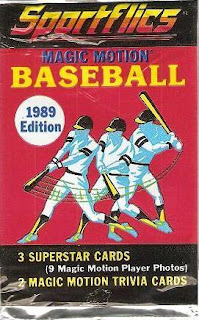 Pretty similar to the 1988 Wrap, just red rather than Blue.

For the Collector
This pack came out of the 6 packs for $5 bin, and it was probably overpriced. The best cards were the Trivia cards and they don't even have a picture.

Check out Team Phungo for even more mid-summer drivel.