Written by SpastikMooss at 6:00 AM
Mixing things up - here we go with some 1995 Panini Casper Collectible stickers. Those of you who read my blog may find this somewhat familiar since I recently opened a few packs there, but this rip will be a bit more in depth, so I hope you enjoy it!

Casper was, of course, the mid 90's take on the old comic. It's kind of a kid's movie, but a really good one, and was the film that originally introduced me to Bill Pullman, the vocal stylings of Brad Garrett (aka Fatso), the beautiful Christina Ricci, and Eric Idle. And for those of you who say, "Wait, the first time you ever heard of Eric Idle was Casper" or "You thought a 14 year old was beautiful - gross," I will answer you with the fact that I was 8 when the movie came out. Now I know more of Idle's amazing work, and more of Christina's work (she's still a babe), but Casper was where it all began, and is where these cards are from!

So without further rambling, here's the front of the package: 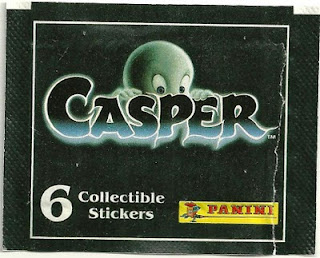 Panini did a bunch of movie stickers in 1995, including Pocahontas and The Mask Animated Series (which will end up on this blog soon enough). All of the packs had this same basic look, with the border around the title and # of stickers, as well as the movie logo. My favorite part is the bulge of stickers in the middle, lets you know what to expect before you open it. 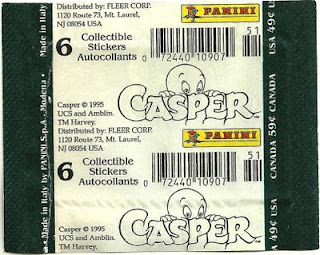 Nothing too special - copyright info, tells you where they're made from, so I guess you could go beat them up if you wanted. Also prices the pack at 49 cents USA and 59 cents Canada. I'm pretty sure that gives Canada a pricing discount - it's also cool to know that I got this pack at 50% off the original price. 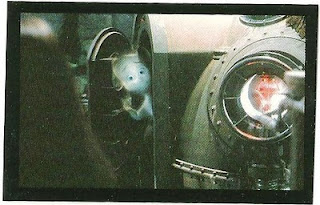 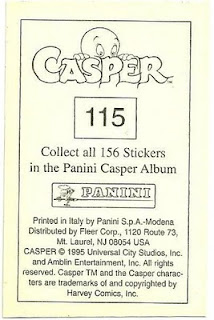 The cards are simply numbered, chronologically as it turns out, so that in a sticker book they would basically tell the story of the movie by showing a clip every 38 seconds or so (100 minute movie * 60 seconds a minute /156 total cards). It actually does a pretty good job of telling the story of the movie if you have them all laid out like I am starting to (now that I have 18 cards). Stand alone, however, the pictures generally make little sense - this card works though, and is from when Casper first enters the life giving machine around the middle of the movie. 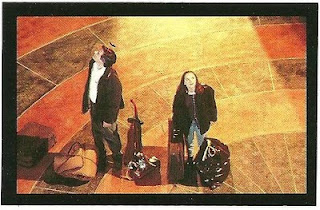 #12 - See, early card # = early scene in the movie. Even if you didn't know the story of the movie (and many of you likely don't), you could probably guess that this is a "move in" image from early in the film. And it is. It's also the first Bill Pullman/Christina Ricci combo sticker that I've pulled, which makes it doubly awesome! 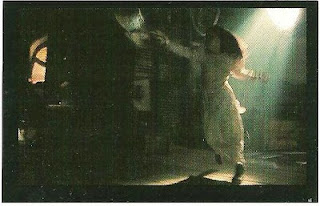 #100 - Here's an example of my only problem with the set - some of the images are simply too dark! This is a great scene, with Casper dragging Ricci around to find stuff. Problem is, it's a very dark scene, and that does not translate well to sticker. The scan actually looks better than it does in hand, since the stickers are so small as is. 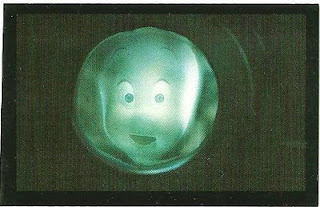 #116 - This one is one of those "hard to place" cards, but numbering makes it easy - since the first card of this pack was 115 and showed Casper entering the life giving machine, this was must be a shot of him in the machine. Otherwise, stand alone though, would any of you guys have known? This is why I need a complete set for these things haha. 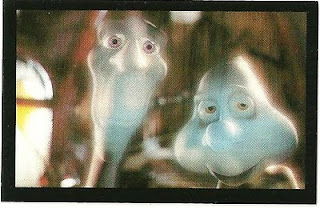 #85 - Here's an example of a sticker that's hard to place without context. It appears to be about 53 minutes into the movie based on my math, which made me think it was from when Bill Pullman goes ghost, but Casper wasn't in the life machine yet, so scratch that idea. Not really sure what scene this is. 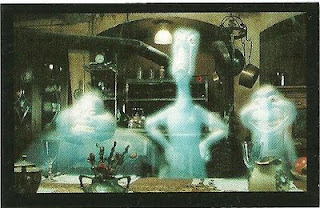 #50 - Last card of the pack, and it's another sceneless card - maybe when Ricci first meets the ghosts? A good shot of all three non-Casper ghosts though!

So, final take? I like the set enough, and as I mentioned on my blog before, I am tempted to collect it, especially if I can find one of the original books to stick stickers in. The collation of these cards seems great - through 3 packs (18 cards) I have 0 doubles, which is a great sign if I do end up building the set. Most of all, however, I just love sets like these that end up being walks down memory lane. Allen & Ginter is great, and I love me some Chrome more than anything. But it's those sets from certain years, or from certain great memories, that often really stick out to me as a collector. I loved Casper as a kid, still enjoy the film as a twenty something, and the stickers help me relive all of those great memories of the film. So I really liked this pack, and I hope you readers did too!