Written by SpastikMooss at 12:56 PM
Hey everyone, I'm Tim, aka SpastikMooss, blogger for the Great Sports Name Hall of Fame. Figured I should finally join the APTBNL team, and so here's my first post - Hope you like it!

I recently picked up 3 packs for $0.75 at my local card shop, none of which have been featured on this blog. Two are sticker sets, and they'll come at a later date. This 2006 NFL Street 3 promotional pack has to come first though, if only because of what it potentially promises on the front: 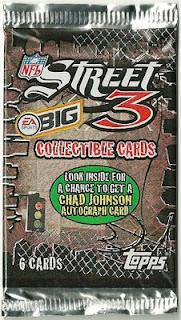 That's right, it reads, "Look inside for a chance to get a Chad Johnson autograph card," aka Chad OchoCinco. A chance at an auto for 25 cents is pretty nice, so I have to open this pack to see if I get it. But first a look at the back, to see what my odds are: 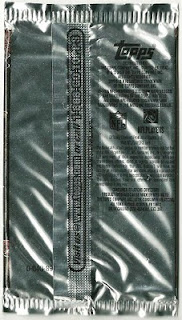 Apparently the odds aren't listed, just legal mumbo jumbo. So I have no idea what my chances are for pulling a Chad Johnson autograph in this pack. I actually didn't even know if the autos themselves are part of the pack, or if there's some kind of contest insert, or if the card is a special offer you can get with so many proofs of purchase.

So...let's get to ripping and solve this thing, shall we? 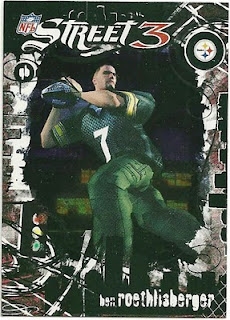 First card out of the pack is...#17 Ben Roethlisberger - Ouch, terrible first card, for so many reasons. It does show off the look of the cards nicely though - logos and positions at the top, name at the bottom, crazy graffiti around the sides, and holo-foil-ish video game image in the middle. Decent enough looking cards. Next up, #16 Troy Polamalu - Man, two Steelers in a row. For that matter, two set numbers in a row. Let's hope that changes. 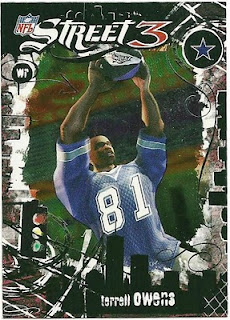 #14 Terrell "T.O." Owens - Still close to 17 and 16, but some digging reveals that this is only a 24 card set. The odds of sequentially numbered cards is probably pretty good with that low number of cards. At least T.O. isn't a Steeler! 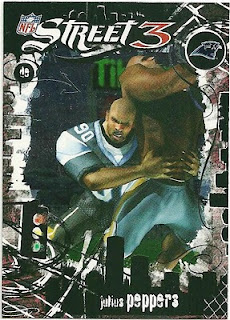 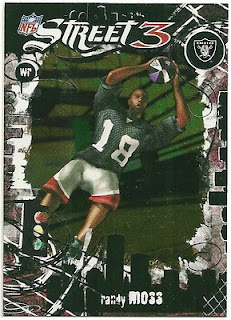 #13 Randy Moss - My prediction is at least half right. For the record, this was the first card I was actually psyched to get, since I'm a homegrown Patriots fan. Then I realized that Moss was a Raider in this set - seems weird that 4 years ago he wasn't with the Patriots, as it feels like he's been with the team forever now.

Since I liked this card, I decided to show off the back too: 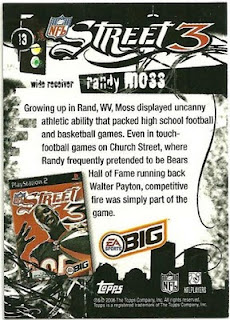 After chuckling at the fact that Randy grew up in Rand, I took a look at the rest of the card back. No stats, which is a bummer, but it does advertise the game, giving you your first look at Chad Johnson. The design of the backs is the same for every card minus the obvious changes of player name, card #, position, and write-up, so this is the 5th time I've actually seen Mr. OchoCinco. Hopefully the 6th time will be an autograph? 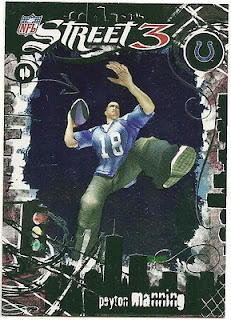 #12 Peyton Manning - No dice on the autograph, and the suspected collation issue is affirmed. I picked up cards 12-17 in this pack, and I wonder if other packs in the set generally fall the same way. I'm a little tempted to go back and grab another pack to check, but I'm not sure that I'd want to drop another 25 cents on this beast, chance at an autograph or not.

Speaking of the autograph, I searched online for evidence of it and found none. It's actually really hard to find these cards (packs or singles) in general - there are a few old (2007) Ebay posts listed on Worthpoint, including the complete set which shows that there were 24 cards to chase, but they aren't listed on Beckett or COMC, and I can't find any current Ebay listings for the cards. I wish I knew the autograph odds better - if the autograph was like one in every 50 packs, I might go back to my store and buy his whole stock to take my chances. If the autograph was a special hit with a ridiculously low print run, then I don't want to waste my time/money.

So if anyone has anymore of an idea than me as to how rare that autograph was, feel free to comment! Otherwise, I hope you enjoyed my first foray into pack posting - all cards are available for trade if you'd like them!

What a ridiculously weird set.

I finally found a Chad Johnson auto on Ebay to complete my set after probably 7 years of nothing what so ever on the site. I hoped it would have some sort of number on the back, but unfortunately the card number is eaa-cj. Still have no idea and still very curious. Great article though, I woulda dropped like 20 bucks into that beast if I ever seen them in stores, as far as I knew, it was a pre-order exclusive.

I have this card, and have no clue what it's worth.

I have this card, but have no clue what it's worth.

Me neither, wish I knew how many were made

I actually have one of these cards...