Written by SpastikMooss at 6:54 PM
I know everyone here has seen 1992 Topps cards, and you've probably heard of Micros (they're like the size of postage stamps, as this post so nicely explains). So if I was just showing off a bunch of postage stamp sized cards, then this wouldn't be all that cool.

The awesome part of this post, however, is the "pack" that these cards came in.

They came out of a quarter machine,
that was sitting in a random Mexican Restaurant,
that's in a former model home park turned elegant outdoor mall.

In other words, most random setting ever.

Here's the machine itself in all of its glory: 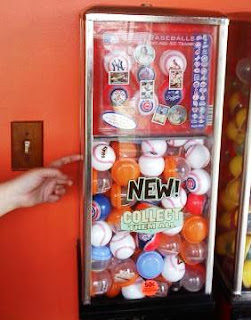 $0.50, which isn't bad. And that's my girlfriend's hand pointing at the machine - she lent me the 2 quarters, so I truly couldn't have checked this out without her!

I couldn't tell the year on the coins, but I think it was '88 or '89. Either way, something I'd pay 50 cents for (especially since you got a few coins per container if that's what popped out).


So I put in 50 cents, hoped for anything but a ball, and out popped this: 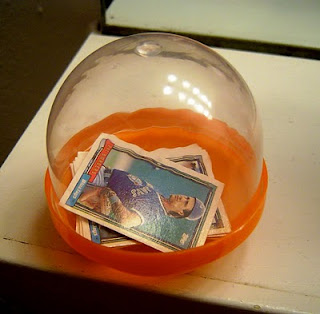 Awwwwwww yeaaaaaaaah! 6 cards in all! The corners were a little rounded, but do you really care when your cards come out of a candy machine? Plus this was a hot "capsule" - I pulled a few great players in this thing! So let's get to it so you can see what I "pulled": 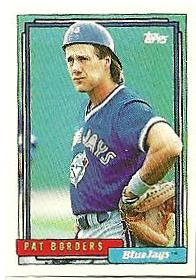 #563 Pat Borders - Not a bad start, as Borders was always a pretty cool guy. Member of two World Series winners, though he was kind of a journeyman post-Toronto. This card also sort of gives you an idea of the size of the card. Not literally since I blew it up, but you can tell by the weird lines on the card that I had to enlarge these a bit to make them easier to see. Here's a better idea of their size, using a random new card I picked up for comparison: 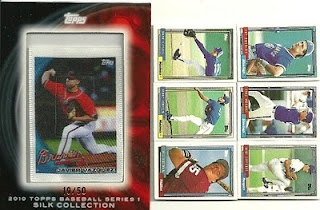 So 6 of these combined are smaller than one card. Crazy stuff. 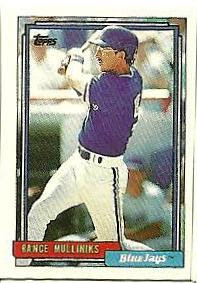 #133 Rance Mullniks - Actual name is Steven, but he went by Rance, which has to be one of the most random names ever. Future GSNHOF nominee? I'd say so. 1992 was actually Mullniks' last season, as he played 3 games with the Jays and then retired into a broadcasting career. 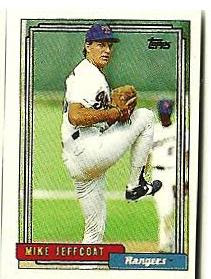 #464 Mike Jeffcoat - I wonder who that lurker is in the background? As for Jeffcoat, his career was almost done at this point - he was out of the Majors in 1993 after a decent 1992, but did have a last huzzah in 1994 with the Marlins, pitching to a 10.12 ERA in 4 games. He actually had 3 seasons with an ERA above 10 during his 10 year career, which makes his career length pretty impressive. Small sample size or no, you don't have ERAs that high and stick around 10 years. So here's to you Mike Jeffcoat! 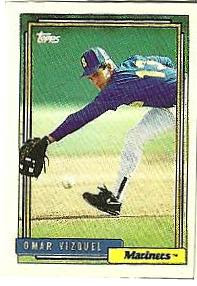 #101 Omar Vizquel - Easily the card of the pack, if only because my girlfriend, who AGAIN scanned the cards first (woohoo!) said "OMAR VIZQUEL? I LOVE OMAR VIZQUEL!" For a little backstory, she's an Akron area native, and she grew up during the mid-late 90's Indians heyday. She said that Omar was the handsome guy on the Indians, which I could see next to guys like Manny and Thome. She then asked if he was still playing, and I told her yeah, with the White Sox, which made her gag a little. And that was the longest sustained sports/baseball card conversation we have ever had. Progress my friends, progress.

Anyways, I thought I'd demonstrate the tiny backs of these cards with Omar alongside the Javy card. So here: 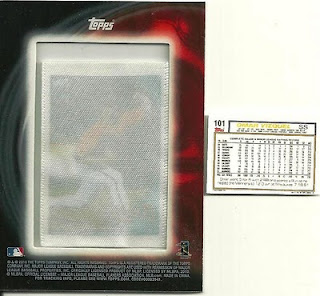 It is so hard to read these things, and I've got 20/20 vision. I think I'd rather take out my 92 regular sized Topps complete set and read the backs than read these little things! 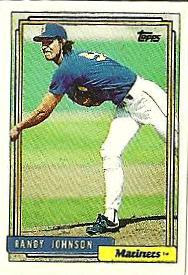 #525 Randy "The Big Unit" Johnson - Told you this was a hot pack - back to back early 90's Mariners stars! Randy also makes the second funny/unusual name of the pack following Rance, which was even more awesome for me. 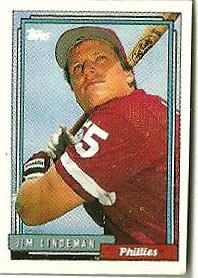 #258 Jim Lindeman - Last but not least, Jim Lindeman. I don't really know much about him, but apparently he ruled at R.B.I. Baseball. So that's something I guess.


Thus concludes tonight's venture into my 1992 Topps Micro Candy Machine find, which was hopefully as random/awesome for you as it was for me. Take this post as a reminder to remain ever vigilant in your quest for cardboard greatness - you never know where you're going to find cards (Having a few spare quarters helps too)!

Sweet! If we send you quarters will you go back and get some for us?

Haha definitely! The food was actually pretty good so we may go back now and then anyways. Might as well hit up the magic machine once again!