Written by Matt F. at 12:12 AM
There are two Walmarts in my town, one giant one and one smaller newer one . I live by the smaller one and they have an obscenely tiny card display that is mostly dominated by non sports cards. The horror! They currently have an empty gravity display for Series 1 and no sign of Series 2. But today I noticed on a rack at the end of the candy display these odd packs of 2010 Topps. 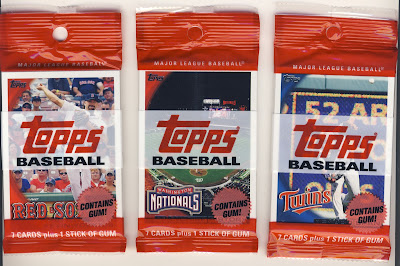 The wrapping didn't give any clue as to if the packs were devoted to one particular series or if maybe they were a hybrid containing both series but I recognized all the cards shown as being from Series 1. They were marked at 98 cents a pack and so I picked up three...and as you can see, each pack "CONTAINS GUM!"

The verdict: these are indeed Series 1 packs. And it looks like Topps substituted the possibility for inserts for some leftover Heritage gum. 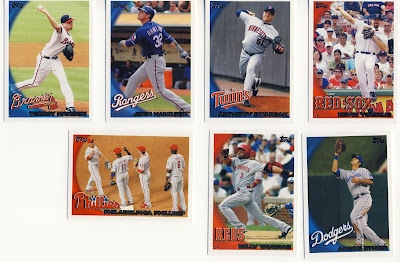 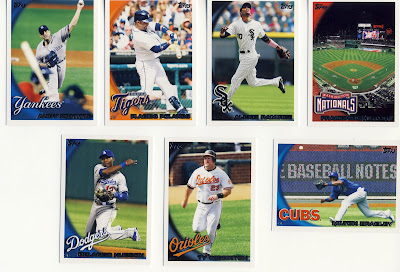 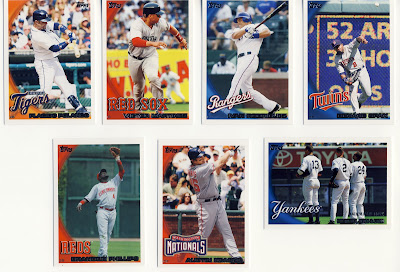 I saw these last night and I wondered what they were... I do like dollar packs of cards and I think inserts are overdone, but if you were buying these chiefly to set build you would have to buy 50 packs without getting dupes. Not such a great deal. Thanks for taking one for the team so I could spend the 3 bucks on a pack of Heritage that yielded all doubles and no SPs.