Written by SpastikMooss at 9:37 AM
I recently had my birthday, and my gifts included the first time my girlfriend has ever directly bought me cards. They're non-sport, as my girlfriend still refuses to support my baseball card habit fully, but I'll take what I can get, and I figured that both packs are perfect for this blog. Plus this first pack is especially exciting, as my girlfriend actually ripped it herself! Crazy, I know. 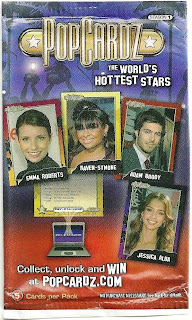 Not too shabby - promises 5 cards down there in the bottom left, and the season 1 part is denoted in the top right. Also, you could apparently collect and unlock cards as well, presumably using codes on the back of the cards that you will see later. However, I went to the site and found that it's currently not much of anything. They promise a new site coming soon, but there's nothing to click on for now, so I'll have to update you guys later on that.

Side note: The Cosby Show kid in me really wanted to pull a Raven-Symone after seeing her on the front!

Of course we have to check the odds of pulling stuff as well: 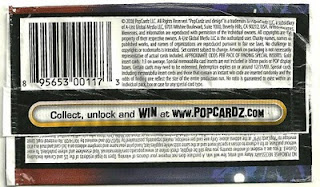 Hard to read, but we have gold inserts, seeded 1:3, and special memorabilia cards, which are not included in "blister packs or POP display boxes." I don't know all of the card lingo, but I'm thinking that means that I don't have a shot at them here - bummer. Maybe I'm wrong? There are also redemption cards possible, but the end date to redeem was "on or around 12/31/09," so I'm hoping I don't pull those. What the hell does that mean anyways, on or around? Would they redeem it 1/4/10? Or does it end 12/27/09? Ridiculous Popcardz, I call shenanigans.

Needless to say, if I do pull a redemption (the packaging says these could be for memorabilia insert cards or for instant win codes), I will send it in to see what I get! So let's get to ripping (or rather, let's see what my girlfriend ripped!): 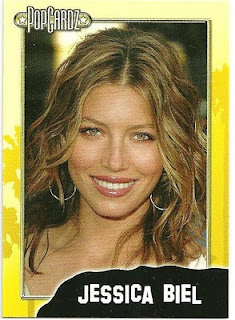 #1 Jessica Biel - Not a bad card to start with, as I like Biel enough. Aside from being a babe, I used to watch some 7th Heaven, and I really liked "I Now Pronounce You Chuck and Larry." So cool, decent actress. I'm a little worried that the first card was card #1, given the collation issues with the last pack I opened here, but we'll withhold those fears for now. Here's the back of Biel's card: 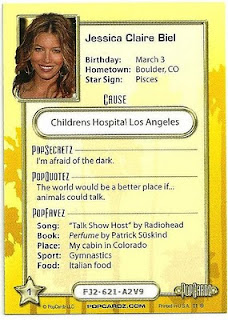 Same picture as the front, and same basic subject headings (poptsecretz, popquotez, popfavez) for each card, though the popfavez items and the popquotez prompts change, probably depending on what celebrities answered. Every card also has a cause that the celebrity supports, which I find pretty awesome! You also get to see the weird code here for use at Popcardz.com, as well as the weird fact that all of the celebrities' star signs are shared on the cards. Personally I could care less that Jessica Biel likes Italian Food and is a Pieces. I did think it was cool that she cited Radiohead's "Talk Show Host" as her favorite song though - it's a really great tune, and you guys should have a listen if you haven't heard it. Go ahead. Do it now. Here's a link to a live version that's really good.


Alright, now that you're back, you get to see the card of the pack, at least IMO: 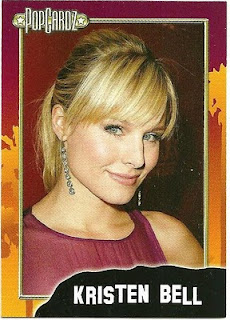 #23 Kristen Bell - I LOVE the movie Forgetting Sarah Marshall. It's hilarious, it's ridiculous, and Bell is a big part of that (though a Jason Segel Popcardz would obviously be my favorite). Bell is a Cancer like me (it's actually her birthday tomorrow, go figure), and her favorite movie is Waiting for Guffman, which is also a nice little flic. 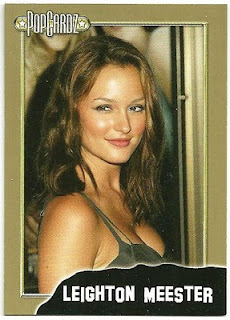 #37 Leighton Meester Gold - Woohoo, we beat the 1:3 odds...I think. There's no serial #-ing or any other way to really tell if this is a gold card, but it has a gold border and looks gold compared to the stuff on Ebay right now, so I'll consider it a gold. It's a bit unfortunate that Meester is the gold card, as she's the only person in the pack who neither I nor my girlfriend recognized. I guess she's big on Gossip Girl, which I've never watched and don't care to watch. Plus Leighton's favorite food is a milkshake...which is not a food...so she loses points there. Alas...an inserts an insert! 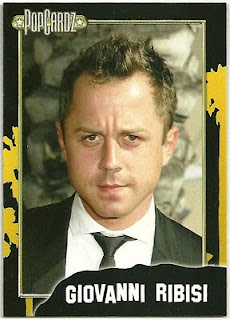 #12 Giovanni Ribisi - I recognized this dude, as this my girlfriend, but couldn't place him anywhere. A trip to IMDB jogged my memory - he was in Saving Private Ryan, and also played the role of Phoebe's little brother on Friends. One of those "seems like he's been in everything" actors, Giovanni's favorite food is Ceviche, and his favorite place is "over there." lolz. 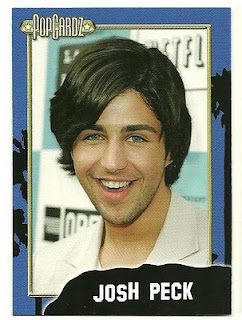 #40 Josh Peck - The 5th and final card, this one threw my girlfriend for a loop. Josh originally got famous on Nickelodeon's "Drake and Josh," where he played the fat funny guy to Drake's heart throb. Josh has since lost a ton of weight, and is now a teen heart throb in his own right. My girlfriend didn't recognize him at all, which made me laugh. Definitely my second favorite card of the pack, especially since his favorite movie stars Samuel L. Jackson (1994's "Fresh"). Not too shabby! 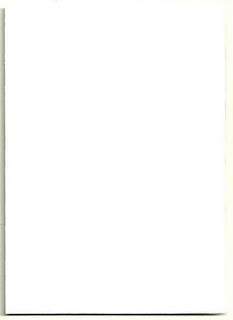 The insert. My girlfriend was like, "Why is this in here," which led to a brief explanation of pack searchers and their vile ways. More importantly though, this means that I didn't get a memorabilia card. I'm not really too bummed - Ebay has some examples, and the swatch circle is very odd. Look at this Raven-Symone example, or this Selma Blair. Apparently they were 2 of only 8 subjects with memorabilia swatches in the set, according to this link which also gives the normal checklist, which is 40 cards long. That means I pulled the first card of the set first and the last card of the set last - weird!

All in all, I am pleased with this pack for a dollar. I beat the odds on the gold card, and I pulled a few actors that I like. I'm a bit bummed about the website being down, so I did some more research and actually found that they had a Facebook page. It hasn't been updated since February of 2009, a month after an event where you could win a giant Popcardz signed by Jessica Biel with the points from your card codes. Looks like the Facebook is as down as the website though - maybe I'll message the creators and see if I can find out a thing or two for you guys!

As for the cards themselves, I'm keeping Kristen Bell, but everything else is available for trade/sale if you'd like it!

Email ThisBlogThis!Share to TwitterShare to FacebookShare to Pinterest
Labels: 2008 Popcardz

This is a set of cards that is begging for a parody version.

Nice, the lady friend is slowly coming around, lol!

Also, if there's only eight, then that means I've got over half the set of memorabilia cardz already then. Somewhat saddened there's no memorabilia card of the Rock though. :(

Got a feeling they had grander designs for this set than what actually came to be. It's cheezy and there are better celebrity sets, but PopCardz had some potential.

Hey, uh, is that Jessica Biel card available for trade?! If so let me know please. flywheels@yahoo.com