Written by R.N. Coyote at 8:47 PM
Was in Pittsburgh, PA a week and half ago and stopped at this lousy card shop where it was mostly gaming cards than sport cards. This is one of few packs I picked up. Other than AW set featuring Raghib Ismail and Doug Flutie I was surprise I found this because I never heard of it. I don't know much about CFL so what the heck. 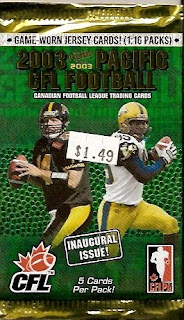 According to the wrapper this is its first set. Not sure if there was another set afterward. It's five cards per pack and here what I got. 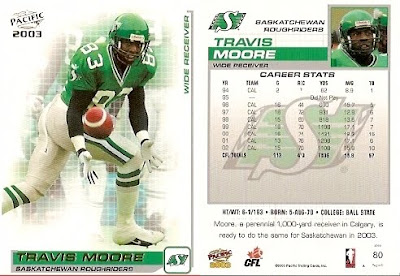 Travis Moore - WR (Saskatchewan Roughriders) - must be a star player in the league since he has over 1000 yards in multiple seasons. 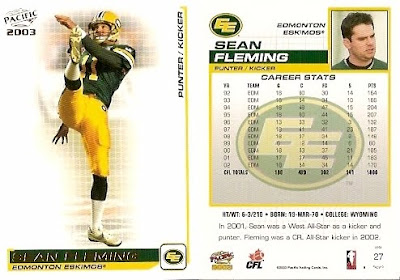 Sean Fleming - punter/kicker (Edmonton Eskimos) - on the back mention he's a CFL All-Star. Must be another star player in the league. I wonder what the C and S meant on the stats. Help from the Canadian readers? 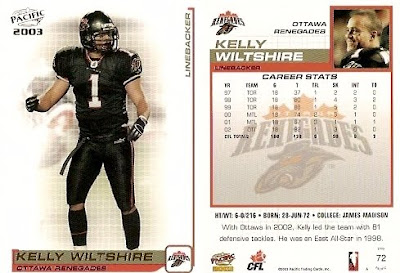 Kelly Wiltshire - LB (Ottawa Renegades) - Reading from the stats on the back I figure out TFL stands for tackles for loss and SK is sacks. Ottawa Renegades no longer exists in the league. 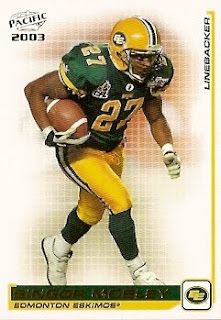 Singor Mobley - LB (Edmonton Eskimos) - here's player that spent time in the NFL. Spent three years with Dallas Cowboys from 1997-1999 before returning back to the CFL. 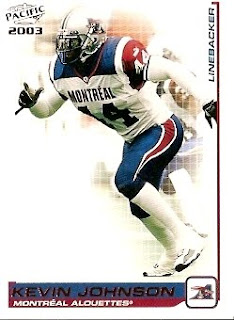 Is this a hit or miss or down the middle?

Looked up that Singor dude and found an article from 1990 that talks about him in high school:

Apparently he had a shot at state star for football. Also up for that same title? One Damon Huard, future NFL QB.

For the record, Singor's team killed Huard's team that year when the two teams met.

I can't quite make out the numbers on the Fleming card, but in the CFL I think you are awarded a point for a touchback on the kickoff so the C may be extra points (follwing a TD) and the S may be touchbacks for points.

That appears to add up on some of the lines if I am making them out correctly.

S is probably for single points which kickers/teams get when the ball goes through the end zone, even on a missed field goal.

C could be conversions of field goals.