Written by Community Gum at 11:41 PM
Basketball playoffs are just around the corner. Since they're overloaded with too many teams and too many games, I figured I'll overload you with some basketball packs.

First up is a pack of 95-96 European stickers. You get 6 stickers in each pack, which you can then either place in your album (I'm assuming as I don't have an album) or wherever else you so choose. 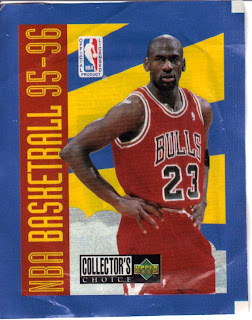 Michael Jordan isn't happy about what's going to be in this pack. Although, maybe he's unhappy someone bought the stickers when they could have bought the full-sized cards for just a couple more pennies or francs or whatever. Or, he's upset that you have to rip through his face to open the packs. I'm always afraid I'm going to accidentally tear the stickers with these things. 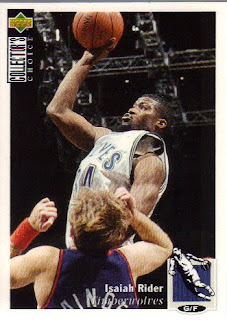 #84 - Isaiah Rider - Two memories I associate with this guy. 1) The dunk contest and 2) How changing between Isaiah and J.R. Rider made lists and organization of his cards annoying. Seen here whack-a-mole-ing stupid Danny Ainge and elevating to the rafters on his way to what will undoubtedly be a soft layup. 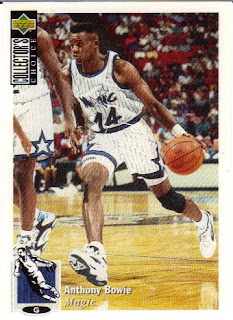 #189 - Anthony Bowie - In retrospect, this guy was probably an underappreciated (by me) role player in Orlando. But then again, if you're a role player in Orlando in those days, that pretty much meant you sucked. Seen here trying to imitate the little guy in the lower right hand corner. Is that Little Penny? 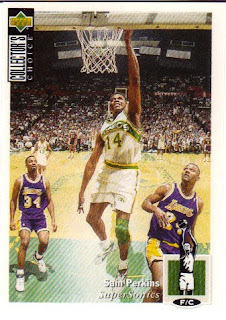 #56 - Sam Perkins - I never liked Perkins, either. Something about his face that made me look past his sorta talent. You can tell the Lakers weren't so hot back then if they're letting a 5 ft, 20 in hobble-kneed player get away with this struggling layup. 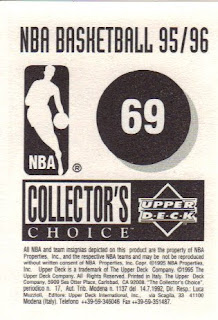 #69 - Reggie Williams - Here's what the back looks like. I guess they decided that people would be peeling them and they didn't need to bother with any names or fancy design on the back. Can't say I really blame them. At least the number is easy to read on the smaller cards. 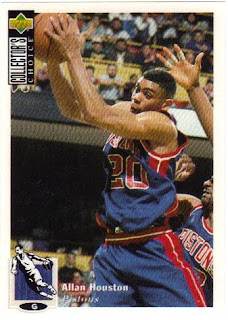 #137 - Allan Houston - I don't really have much to say about Houston either, other than I felt he was overrated. I promise I did like some players. 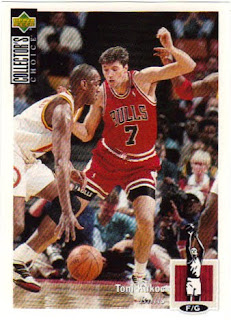 #122 - Toni Kukoc - See, here's a player I like. A Sixth Man of the Year that helped my Bulls win their second three titles. The only thing I didn't like about him was that he wore number 7, which was supposed to be my number with them once I made it.

If you aren't familiar with the Collector's Choice sets at the time, the European version is an exact replica of the previous year's design. This is the sticker version of that. The only indication that these are foreign is the Italian address on the back and the mulit-lingual packs. I honestly don't know if they used the same picture from the previous years, but I would venture to bet that they did. For a former multi-player collector like myself, these would be great to pick up some "rare" mini-versions. They're also good for kids, but not much else.

Rider was arrested again recently. Most hilarious/worst Blazers player of all-time who could pretty much back down any player in the league and score on them... if you didn't mind him taking almost the entire shot clock to do it.