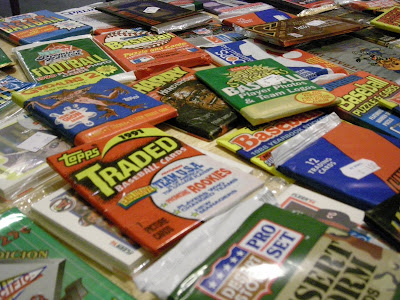 To celebrate A Pack To Be Named Later's 1st Anniversary we are having a great big junk wax giveaway! A few months ago I changed the blog's masthead image to my coffee table filled with junk wax. Take a good long look at that. There are 95 packs of cards on there and they are the key to becoming the big winner.

Yes, I went through all of them and added up the number of cards included in each pack. I included stickers in the count but did not include contest cards or gum [obviously] in the grand total.

You have one week to make your best guess along with the tie-breaker. Have your entry in by 7pm Central Time, Tuesday, July 13th.

Wait, my first guess was really dumb. I don't know what I multiplied by...but wow.

I don't know if I want to win this.

couldn't post earlier in the day, so try again from a different laptop:

I realize that with this guess, I have passed up on the opportunity to reach into your pocket and pull out a crisp hundred dollar bill, but it is a risk I am willing... NO! Make that, obligated to take.