Written by shoeboxlegends at 4:15 PM 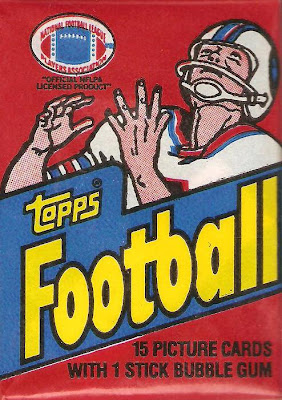 The 1983 Topps Football pack I ripped a few days ago was actually quite enjoyable, so I decided to pick up a pack of '82 Topps for comparison sake. My '83 pack had a couple of Hall-of-Famers in it, can this pack top it? I hope so, this one cost me $6, twice the cost of the last pack. Well, right off the bat I think the wrapper here has a slight advantage. Same vintage feel but I like the cartoon on this one better. The '82 release also comes in at 15 cards a pack, two cards more than '83. Let's see how I did: 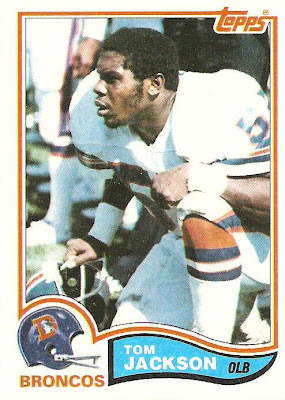 #80 - Tom Jackson - Pretty good start. Tom had a long and successful career for the Broncos, but is more recognizable to me for his broadcasting work at ESPN. I like the photo and I have to give this set a clear advantage in design factor over the '83 cards. As a baseball card collector I immediately saw elements borrowed from quite a few baseball sets, including: 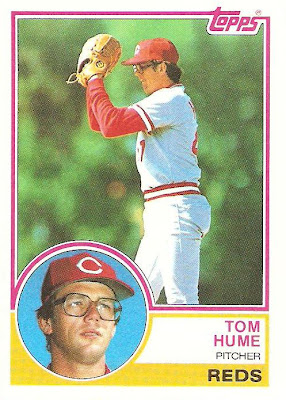 1983 Topps - The border around the photo in the football set was used again by Topps in their 1983 baseball release. A single clean line that surrounds the photo, with a bump at the bottom (for an inset picture in the baseball release, for the helmet in '82 Topps football) and the very same Topps logo along the top of the card. That's not all though... 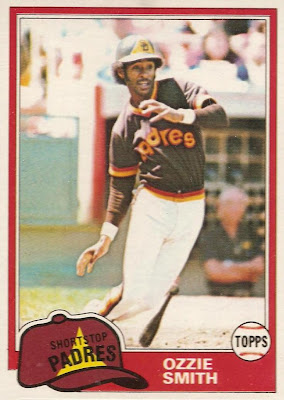 1981 Topps - The helmet in the lower left hand corner of the Tom Jackson card immediately reminded me of the baseball caps used in the 1981 Topps design. And finally... 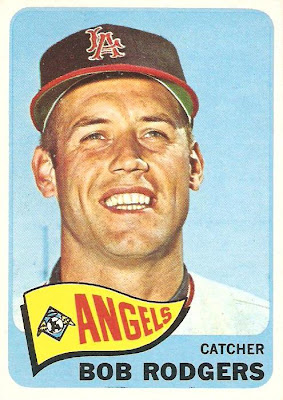 1965 Topps - This set is widely recognized by baseball collectors as the set that displayed the team name in pennant format. While it's not an exact replica, the use of a pennant for player and position name in this football set reminded me of these vintage beauties. I mashed the last 3 cards together in about 10 minutes in MS Paint to give you a visual: 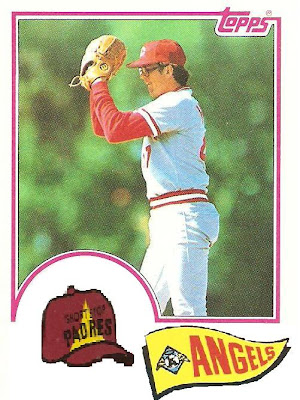 You get the idea. This is a football card post and I'm drifting off here. Let's look at the design for the backs: 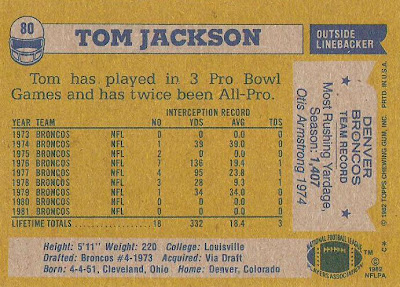 Pretty boring card back if you ask me, full stats are a plus but the design puts me to sleep for some reason. We do get some basic biographical info along the bottom, and a short blurb about the player above the career stats (in most cases). There is also a trivia question or team related fact along the right edge. One thing I do like is the football helmet graphic used for the card number field. 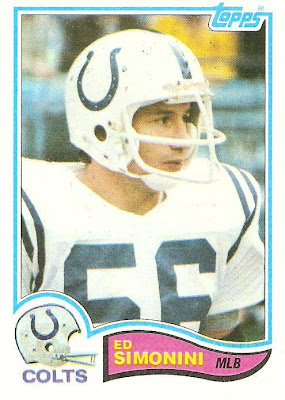 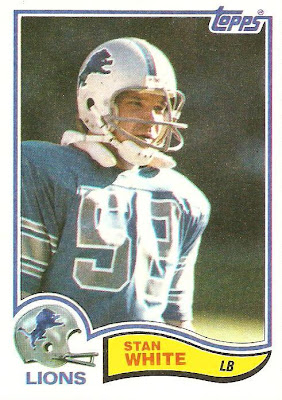 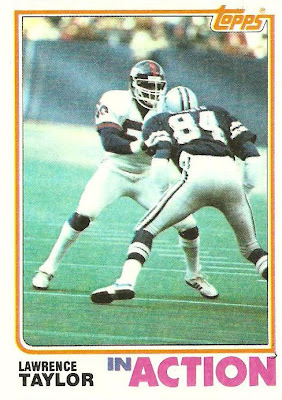 #435 - Lawrence Taylor - In Action - Nice! Lawrence has gotten himself in some trouble recently, but I like the card. I think this is the first year that Taylor had a Topps card, however this technically isn't his rookie since it's the In Action subset card. As a baseball card collector I recognize this subset from sets like 1972 and 1982 Topps. 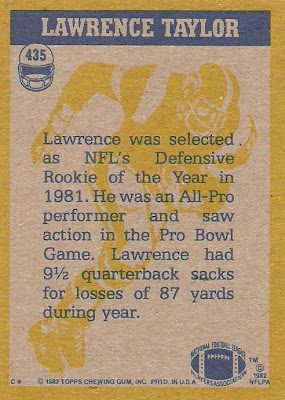 The backs of the In Action cards contain a small paragraph printed over a football player watermark. 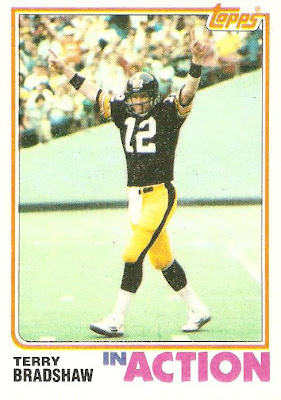 #205 - Terry Bradshaw - In Action - How's that for back to back cards? I like the photo on this one. I've opened two packs of football cards my entire life and pulled a Terry Bradshaw in each one. If you think those odds are slim, keep reading. 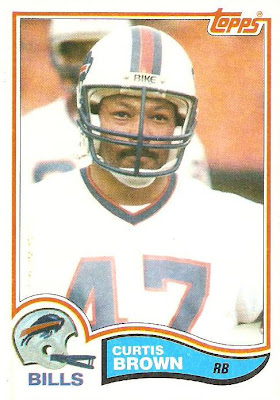 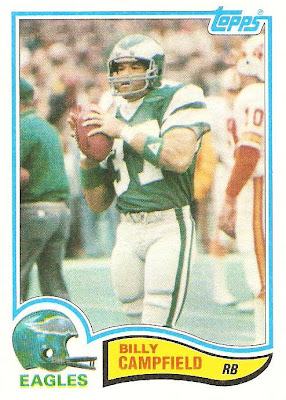 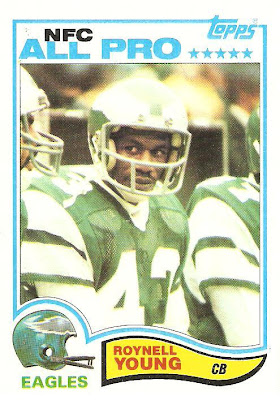 #461 - Roynell Young - Roynell was coming off a Pro Bowl 1981 season. It would be the only Pro Bowl appearance of his 9 year career. 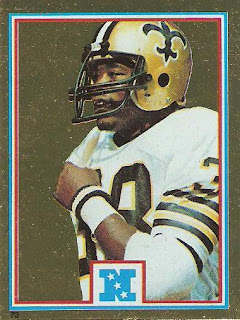 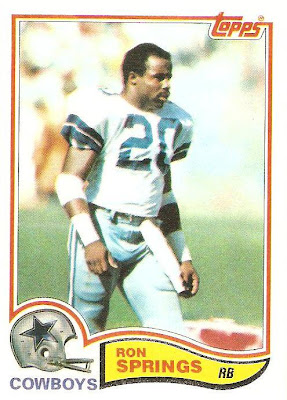 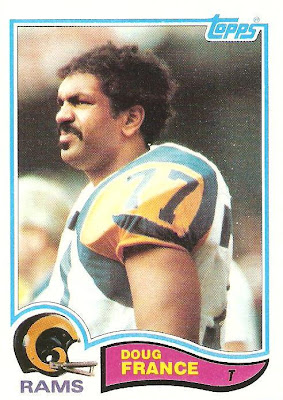 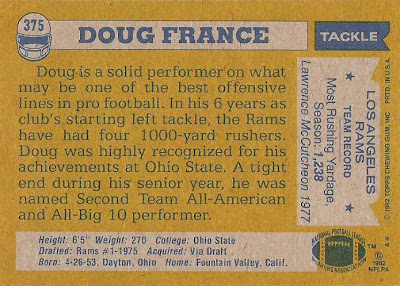 For some reason a few cards contained no stats. 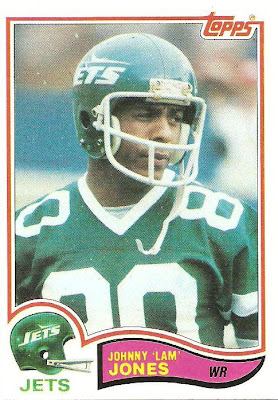 #170 - Johnny "Lam" Jones - This guy has a cool story. A high school track legend in Texas, he won a gold medal as part of the men's 4 x 100 meter relay team in the 1976 Olympics. Drafted by the Jets, his hands weren't as dependable as his legs, and he never became the receiver some thought he could be given the speed he had. 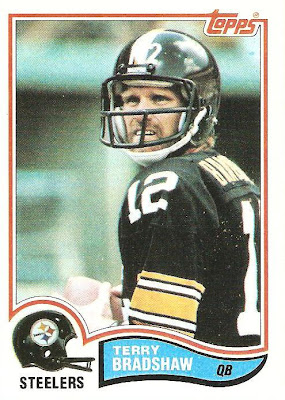 #204 - Terry Bradshaw - Just bizarre. That's 3 Terry Bradshaw cards in 2 packs. Looks like the In Action cards follow the base cards for each player on the checklisk, just like they did in the baseball releases. 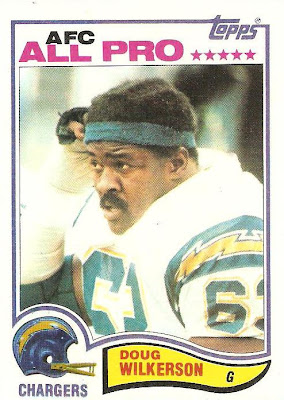 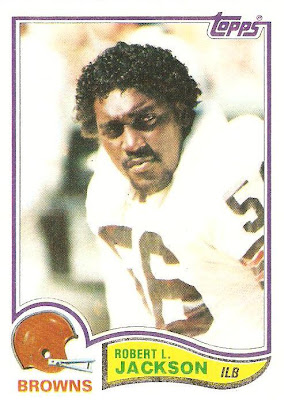 #65 - Robert L. Jackson - Getting tired of Googling some of these names. He could be Samuel's older brother for all I know. Are there any Browns fans left at this point? 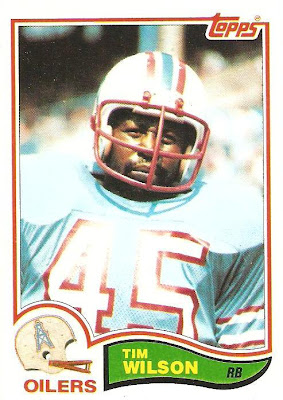 All in all that was a great pack. I think this beat the '83 pack hands down. The wrapper was better, the design was better, there were two more cards, and I pulled better cards as well. Which set do you like better, 1982 or 1983?

Second - I collected 1982 Topps back in 1982 - I can't exactly remember but I don't recall stickers coming with packs (but I could be wrong) It does not mention any stickers in the packs on the front, is there a mention of the stickers on the back of the pack.

Nothing on the wrapper regarding the stickers but it does appear they were inserted one per pack:

Ha! I pulled many doubles of France, Jackson Wilson and especially Johnny 'Lam' Jones. Not one single solitary Bradshaw or Taylor though. I didn't get any stickers either, but I think I bought rack packs instead of wax.

I loved 1982 packs back in the day. It was the first year that Topps got permission to use team / helmet logos. Everything previous had been either airbrushed (the Rams were particularly bad paint jobs--horn truncated to look like stripes), or needed the player's helmet off.

Come to think of it, *that* would be a sweet pack to bust on this site. I wonder what I can find an 81 Topps pack for these days...

Towards the end of the season for both 1982 baseball and football, Topps included stickers in packs of their base product because as a release on its own, the stickers didn't sell out.

Other ways Topps got rid of unsold product was via rewraps. It's mentioned here: