Written by SpastikMooss at 6:00 AM
Welcome to the other pack that my girlfriend bought me for my birthday (the first being 2008 Popcardz). While she dislikes my card habit, she likes our president, and so these babies ended up in my hands.

I'm actually surprised that a pack of these hasn't been posted, since APTBNL important guy Heartbreaking Cards actually collects the stuff. Yet this is the first time these cards are to be posted here, and I'm glad to post them!

(By the way Matt, all base cards I pulled are cards on your want list - they're yours if you need them!). 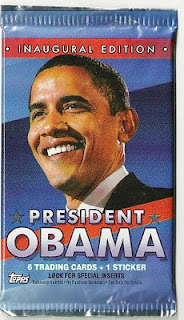 Nice little front - promises 6 cards and a sticker, as well as randomly inserted special inserts. How randomly, you ask? Well, let's take a look at the odds on the back of the pack: 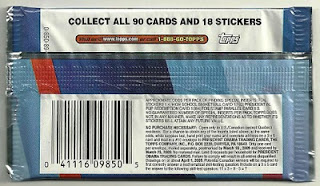 90 base cards in this set, 18 stickers. Foil Stickers are 1:4, High School Basketball Card is 1:192, Presidential Pup Redemption is 1:384, Foil Stamp Parallel Card is 1:3. All pretty cool stuff, though we're obviously trying to avoid the redemption since they expired in March of 2009. So let's see if we pulled anything sweet! 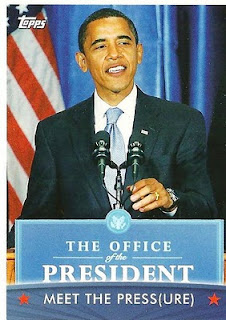 #76 Meet the Press(ure) - Nice little card of Obama saying some stuff. Though any shot of someone in front of a bunch of microphones always makes me think of the Family Guy quote though. Heh heh heh.

Here's an example of the bask of a base card: 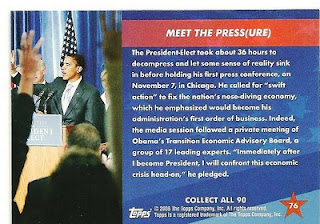 All the backs have a picture in the left 1/3, with a big text block in the right 2/3 that talks about how awesome Obama was going to be/is, depending on your side of things. 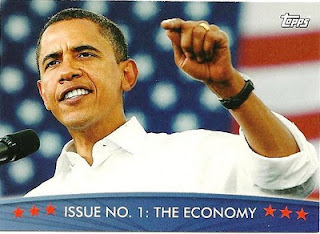 #41 Issue No. 1: The Economy - Meet the Press(ure) talks about the economy, and this card does as well - go figure. Obama is being very point-y. 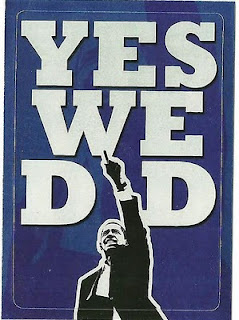 Sticker #18 Yes We Did (By Golly, Buy Local) - The front is really excited, the back talks about supporting small businesses. Don't believe me? Check it out: 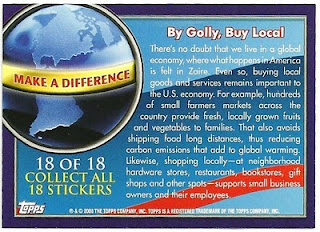 Obviously a little different than the base cards, I wonder if all the sticker backs feed advice to the card's owners? I second the suggestion of this card though - buying local rules! Unless you use Netflix of course...it's so damn good, Hollywood Video and Blockbuster be damned! 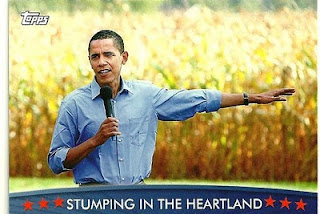 #29 Stumping in the Heartland - I don't really get the word stumping here - it sounds like he outsmarted someone or asked a really tricky question, but the card back talks about how he beat Hillary Clinton and John Edwards in a January 2008 Iowa Caucus. Good times, weird way to describe it. 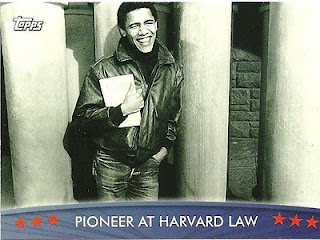 #17 Pioneer at Harvard Law - aka sexy black and white Obama. The jacket is just too cool. He should bring that back to give him a little bit more of a B.A. feel. 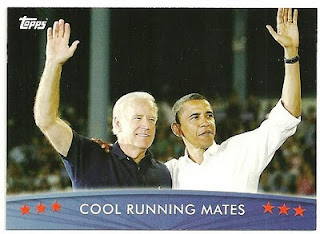 #39 Cool Running Mates - An awesome card if only for its reference to the 1993 Bobsled movie. Doesn't hurt than Biden and Obama kind of look like a two armed/two headed creature here as well. And the back on this one is neat, as it reminds us that Biden ran for president for a hot second in 2008 as well. A fifth place finish in Iowa caused him to drop out though, allowing him to be the "Big effin' deal" VP that he is today. 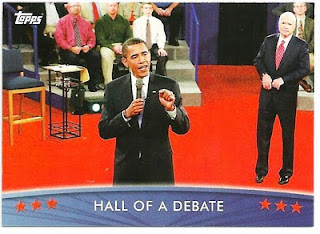 #50 - Hall of a Debate - Last but not least, an awesome pun and a pretty cool card. McCain looks kind of strange there in the back - why is he perfectly cropped when the president isn't? I'd also say that the guy in the white shirt behind Obama can't be any older than 16 - go ahead and enlarge the picture, see if you agree with me. I'll wait.

And that'll do 'er, one pack of 2009 Topps President Obama Inaugural for your viewing pleasure. All base cards are Matt's if he wants them. As for the sticker, I may put it next to the Morgan Freeman bumper sticker on my car. I wonder if it's relatively weatherproof?