While not technically cards, the 1990 Topps Baseball Coins set didn't exactly feature something you'd consider a coin in the tradition sense, either. The metal always reminded me more of what you'd find on a Quaker oatmeal cylinder, or a can of tennis balls. I only recently found out (or relearned, most likely) that these were actually based on sets that Topps put out in the '60s. In any case, I've always liked them but let my own personal stash of odd-sized stuff disappear at some point during one of my many moves. I think the coins were all pretty much rusty from living in basements anyway. Thanks to some kind traders, I've managed to grow my late '80s/early '90s Topps Coins collection to 4 Cardinals coins and now I have a pack that was included in the big Giveaway. I think someone unearthed a stash of these at some point, because I've seen entire sets included in repack boxes recently. 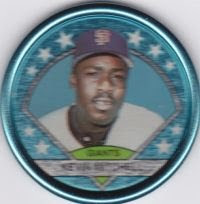 33 - Kevin Mitchell (The scanner doesn't like these because the front of the coin does not lay flush against the glass because of the outer rim.) 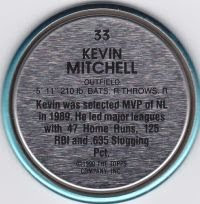 This is a little more readable. I'm not sure how these compare to the originals, but it would have been nice to see a few rudimentary stats on the back. 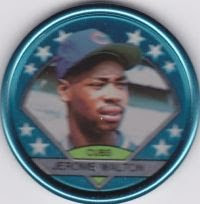 35 - Jerome Walton (Ah, Jerome Walton. Along with Dwight Smith, I wonder how much cash was blown on two Cubs prospects from their surprising 1989 season.) 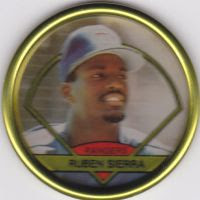 28 - Ruben Sierra (As you can see, some of the coins have different designs/color schemes. I think it was more than just National League and American League designs, but I'm not positive.)

Did anyone actually buy a coin holder? Look at that price. I would buy one of these now and actually try to put the set together if it was still that cheap and available.

Finally, here's the full checklist if anyone cares to click and zoom.

I had so many Topps Coins from 89 and 90 growing up, but I never bought a pack, so I have no idea where they came from. I traded almost all of them away once I started collecting though - I only have 5 left now, and I don't think they'll go anywhere (one is a Griffey rookie, two are Fred McGriff, and the other two are cool guys who I forget at the moment lol).

How much are they worth i have a never open pack