Written by shoeboxlegends at 8:45 PM
This is my first post for A Pack To Be Named Later, so I'll give you a brief introduction. My name is Shane, and I've had my own blog, Shoebox Legends, going for about two and a half years now. I collect only baseball and hockey, with a focus on older vintage cards. I used to contribute to A Pack a Day but that site (sadly) seems to be dying a slow death, and Matt was gracious enough to allow me to post here.

Another year of NFL football is right around the corner, and as teams proceed through camp and fans get pumped for the upcoming season it seemed like the perfect time to post a football pack. I'll preface this rip by saying that I am not a football collector (in fact this is the very first pack of football cards I've ever opened). Although I watch every Sunday during the season, I don't consider myself a football historian in even the most basic sense, so I apologize in advance if any of this info is inaccurate or if you the reader experience any "how does he not know who THAT guy is?" moments. Truth be told the local hobby shop had these unopened packs of 1983 Topps Football for $3 a pop, and I thought it would be fun to open a pack that's almost as old as I am. 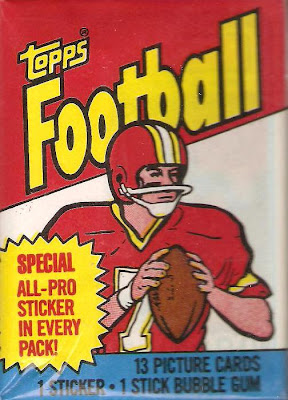 For starters, I think the wax wrapper is great. I've said this before, but I wish Topps would go back to issuing old school wax wrappers with cartoon players, even for just one set. The artwork/design on this is so much more interesting to me than what we get with most modern pack wrappers. As the wrapper indicates, for my $3 I will receive 13 player cards, 1 sticker and 1 stick of bubble gum. The gum was absolutely nasty, as you would assume after 27 years, but the good news is that unlike some other older packs I've ripped it did not claim any cards as casualties. I usually assume one card in the pack will be permanently fused to the stick of gum, but in this case all 13 were in pretty good shape. 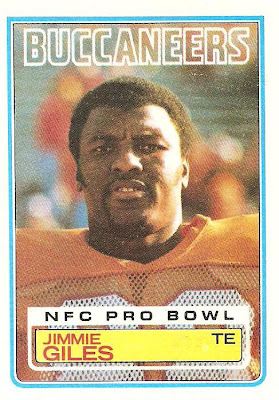 #178 - Jimmie Giles - Like most of the players in the pack, I have no idea who this guy is. He stuck around for 13 years in the league though, and was a 4 time Pro-Bowler, so I guess this is a decent start. 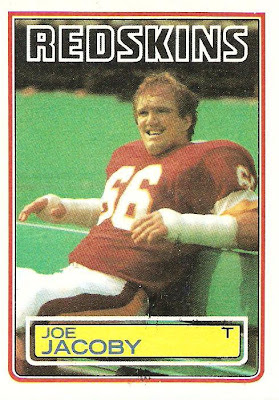 #190 - Joe Jacoby - Despite his lackluster appearance, Joe was actually on the verge of greatness when this photo was taken. He was a career Redskin, and would be named to 4 straight Pro-Bowls beginning in 1983. He also won 3 Superbowls with the team before retiring in 1992. 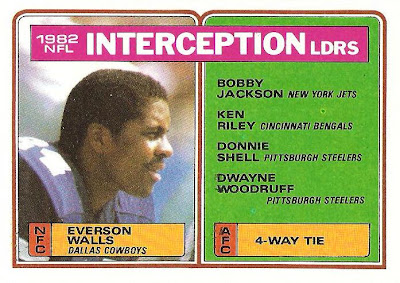 #206 - 1982 NFL Interception Leaders - This is where my NFL ignorance really comes to light. I don't know even one of the five players listed on this card. I wish one of the four AFC guys would've had just one more pick so that we could see an actual photo on the AFC side of the card rather than a big green box. 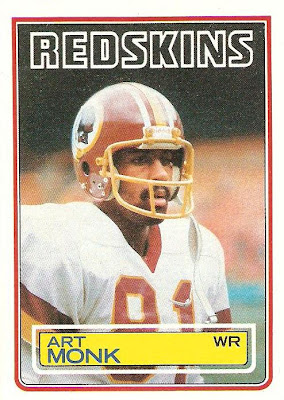 #193 - Art Monk - Alright, somebody I've heard of! Monk was inducted into the Pro Football Hall-of-Fame in 2008, and if you can believe Wikipedia had the longest standing ovation for a Hall-of-Fame inductee (who tracks these things?!?!) at 4 minutes and 4 seconds. Let's take a look at the design on the back: 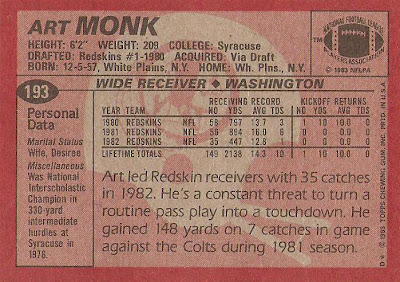 The backs look pretty similar to the 80s Topps baseball backs I'm used to seeing. I think the watermark football helmet in the background with the team's logo on it is a nice touch though. 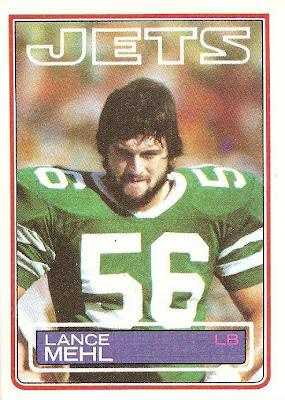 #349 - Lance Mehl - Design is pretty minimal on these cards. A whole lot of standing around, and very little in the way of action shots as far as the photography goes. In fact, there was not a single action shot on any of my 13 cards or the sticker. 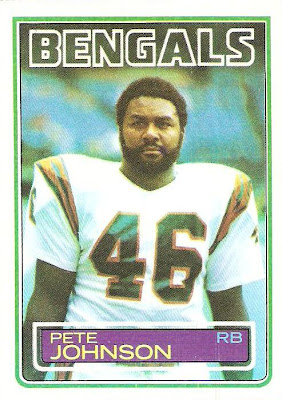 #237 - Pete Johnson - Johnson had a pretty spectacular career at Ohio State, was a member of their All-Century team in 2000 and was inducted into the Ohio State Athletics Hall-of-Fame in 2007. His success continued to some extent at the NFL level, as he led the Bengals in rushing for all 7 years he was with the team. 1983 would be his final season in Cincinnati. He seems to have found himself some legal trouble after his playing days were behind him, including cocaine trafficking. 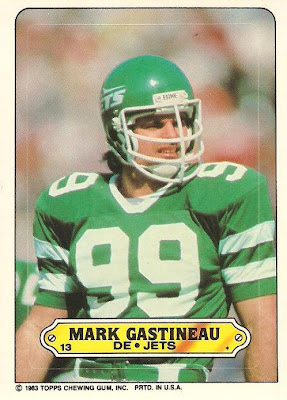 Sticker #13 - Mark Gastineau - Here's my one-per-pack sticker. I guess this guy was an absolute monster of a pass rusher back in the day. Gastineau apparently also has a child with Brigitte Nielsen?! 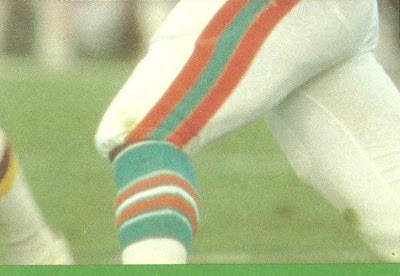 The sticker backs combine to form some type of action shot which appears to me to be a Dolphins player in pursuit of a Redskins player? 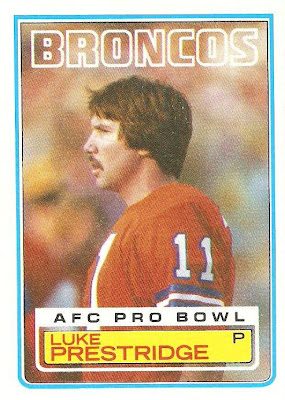 #267 - Luke Prestridge - Alright, a punter for the Broncos. With a mustache. 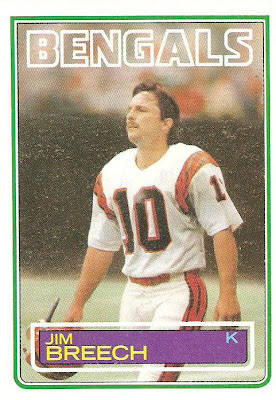 #233 - Jim Breech - Breech was cut by the Lions, who drafted him, then cut by the Raiders, but once he found a spot in Cincinnati he went on to have a pretty successful career. 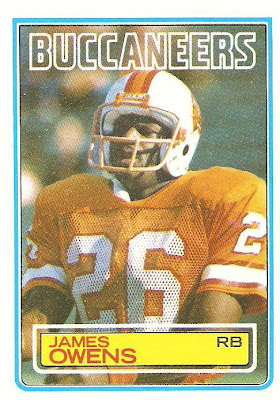 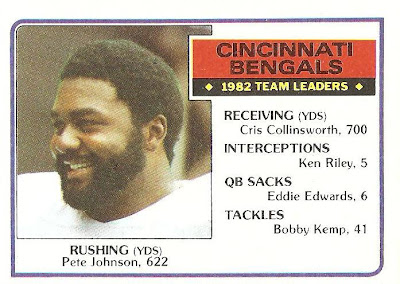 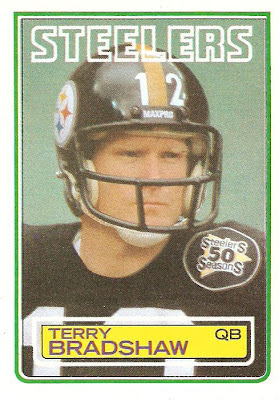 #358 - Terry Bradshaw - Now there's a name everybody knows. I was starting to wonder whether I'd get a single quarterback in this pack. Nice to pull another Hall-of-Famer, even if this a late-career card. 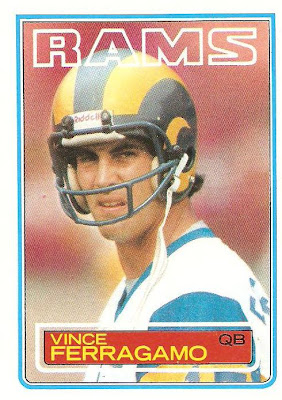 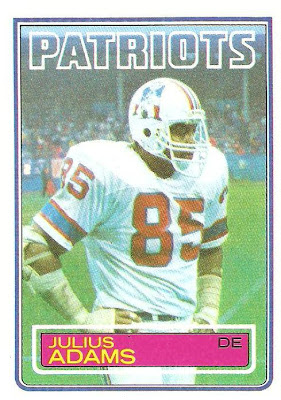 #325 - Julius Adams - Final card in the pack, Julius Adams of the New England Patriots, my local team. Julius actually had a long career, all of it spent with New England. 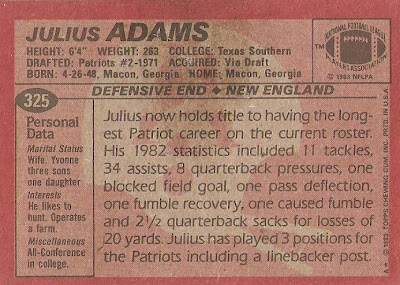 I think it's interesting that there is a Personal Data section on the backs of these cards, which for many players lists their marital status as well as any children they have. I'm not sure why anyone cared to know this or what Topps was thinking when they decided to include it. I know the subjects in the set are real people and not just athletes, but does anyone collecting this set care that Julius and his wife Yvonne have three sons and a daughter?

Well, that about wraps it up. I hope you enjoyed this look at 1983 Topps Football!

That design was so awful that it's kind of awesome.

I don't know that you'd ever see anything like "marital status" on a card today. Just think of all of the tabloid possibilities.

Wow, I love the Marital Status too, so weird! And I actually like the odd leaders card with the 4 way tie - what a completely ridiculous way to honor all of the leaders from that year.

That design is not awful, it's the best football design of the '80s!

Monk and Bradshaw in the same pack is pretty sweet.

The green box for the four way tie is hilarious. I wonder what would happen if all five guys tied for the league lead.