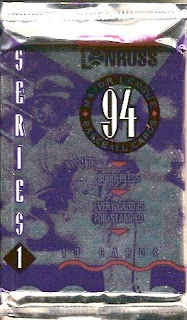 Your ranting coyote is here with another pack of Donruss baseball this time from 1994. The year is forever known for the strike shorten season that canceled the World Series. This pack is from series 1 with 13 cards in a pack. The cards itself is pretty good being foil stamped and glossy pictures on the front and back of the card with stats limiting to 1993 season. The problem with it comes years later when tried to open a pack and often the cards stick together. Good luck and careful opening the packs now. As for the pack I got: 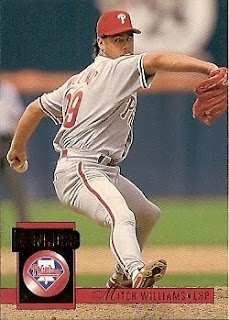 113 - Mitch Williams. This was "Wild Thing" last productive season before becoming out of control wild on the mound losing control of his pitches starting in the World Series. It effectively ended his career several years later despite number of comebacks. 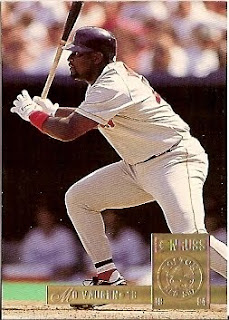 42 - Mo Vaughn (special edition) - he was the Beast in Boston. As for the special edition card they produced 100 card set with a holographic embrossed foil stamping. About one comes per pack and is split in 50 cards from each series. 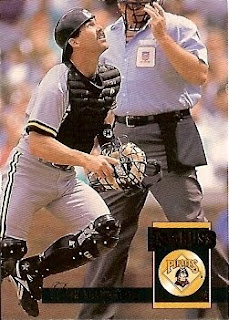 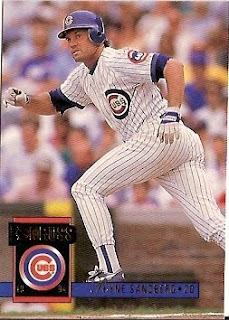 18 - Ryne Sandberg - 1993 was the last time this Hall of Famer made the All-Star team. He abruptly retired after 57 games in 94 season for not playing the standards the Cubs paying him. He made a return in 96 playing two more seasons before calling it quits for good. Now he's rising in the managerial ranks and is predicted to become Cubs manager for 2011 season. What a class act.

23 - Robin Ventura - when I saw his first card (1989 Big Topps) I expected big things out of him. He was good hitter but left me disappointed when he didn't get the numbers I expected of him. He never made the All-Star team in his 16 seasons. At 9 years old at the time and a fan, I really set him that high. 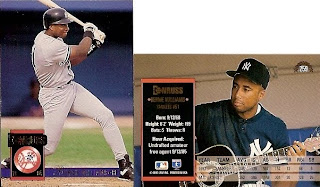 259 - Bernie Williams - what I like about full blown back shots is not just on the field plays but off the field as well. Here's Bernie playing a guitar in the dugout. 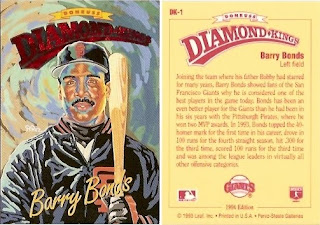 DK-1 - Barry Bonds - Diamond Kings insert set starts with Barry Bonds. He did become the king on the field as in homeruns. 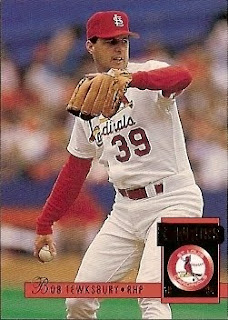 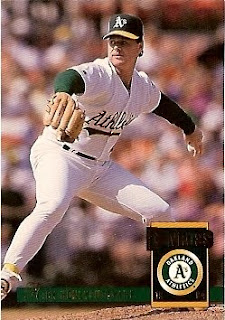 169 - Rick Honeycutt - 1993 was his last season with the A's. He's became effective reliever during his run with the A's and stayed that way playing to his final game in 1997. He's been Dodgers pitching coach for last five seasons. 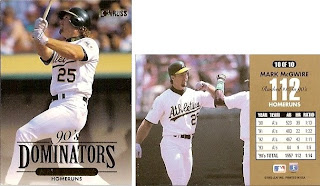 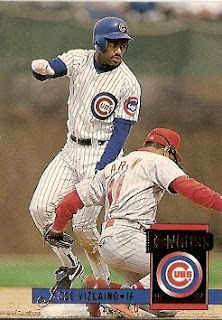 291 - Jose Vizcaino - the utility player was with his 2nd team at the time. Just before start of 1994 season he shipped off to the Mets. By the end of his playing career he played for 9 teams in 18 seasons. 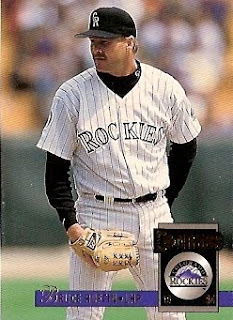 305 - Bruce Ruffin - He was Rockies closer for few seasons during the pre-humiditor years. 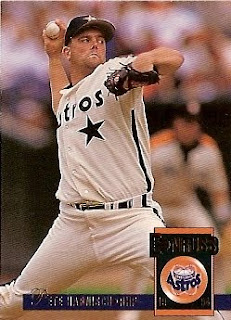 113 - Pete Harnish - of all players Astros keep from the Glen Davis trade it was him while they shipped off Steve Finley and Curt Schilling. He was a decent ace for the team during this time. He would be traded after the strike shorten season.

It was a nice pack for me.

Wow, I had no idea how horrible the Diamond Kings looked that year.

As comparatively difficult it is to get the Gold embossed cards, I've only gotten one myself. And it's Mo Vaughn also.

I think that every sportswriter wanted Don Slaught to be devastating at the plate. Any excuse to write a cliche yet still entertaining headline like "Don Slaught Led the Onslaught Versus the Tigers" can't be resisted. I think I even heard Mel Allen quote this phrase in an episode of TWiB when I was a kid.