Written by dayf at 12:19 AM
It's been a while since I posted here and I've got 3 soccer posts waiting in the draft folder but I've had a horrible day and have drank some horrible alcohol and I'm up at 1:00 in the morning so it's time to post something just for the sake of posting it. Here's something you haven't seen here before:
2005 Topps SportsClix 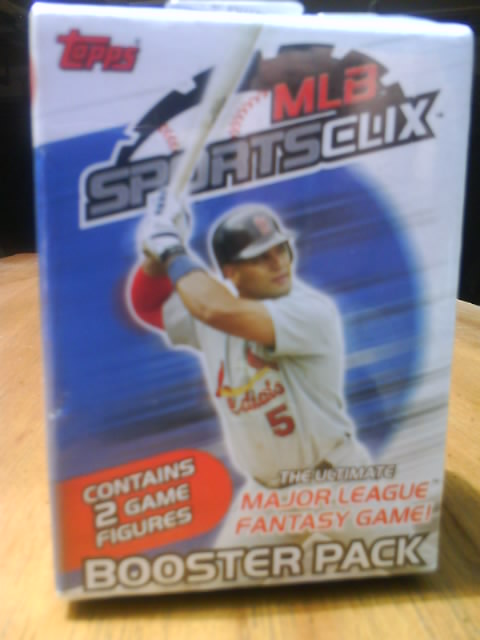 If you've ever opened a pack of 2004 Topps you've seen an ad for these things. Little miniature figures of baseball players with a base you can turn around (making a clicking noise of course) to bring up stats to play a complicated and not all that fun baseball game. The Marvel and DC comic versions of this game were quite popular for a while, the baseball game not so much. At one point KMart was selling packaged with about 20 packs and a starter set for 10 bucks and they never moved out the store. Hell, I didn't even buy one and I liked the things. I bought a couple of packs at the flea market for a buck a pop for the heck of it. 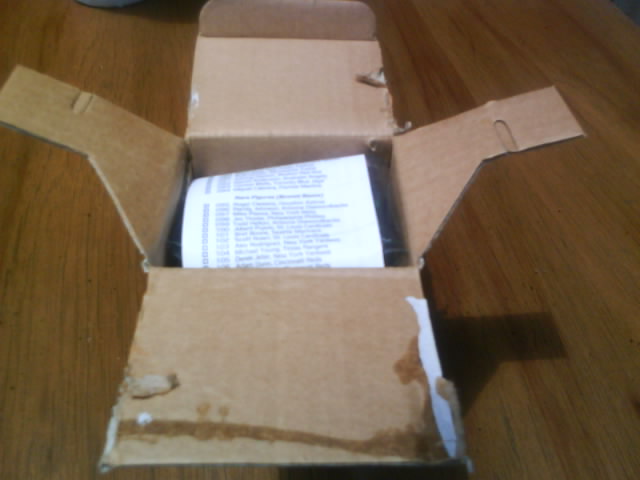 Here's the open box. It's a pain in the rear to open, there are two flaps glued to the side that have to be pried or cut open, then you open a flap, then two more flaps, then there's a checklist and a bunch of plastic, and eventually you get to the figures. This is the 2005 version, which meant along with common, uncommon and rare figures (Curse you to hell Magic:The Gathering for ever bringing that nomenclature into our or any other hobby) there were super rare Legends figures like Babe Ruth or Babe Ruth in a Boston uniform. Of you think I got one of those in this pack, you're an idiot. 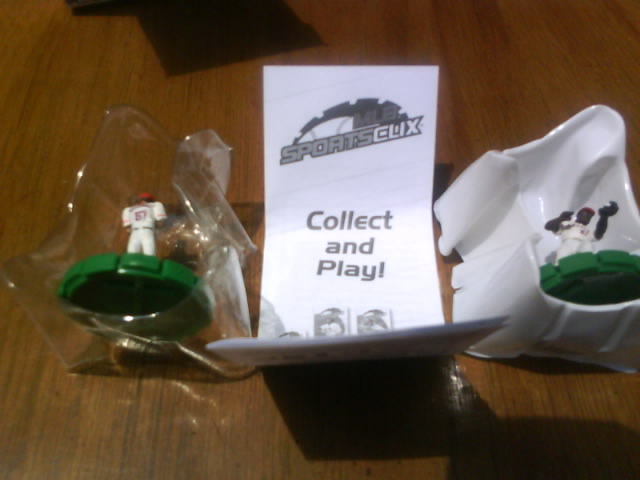 Here's what I got. Can't really tell what it is yet, can you? Thank goodness I've got a crummy camera on my phone. It allows me to avoid buying a $30 battery for my real, decent digital camera my poor family spent hundreds of dollars on hoping to get photos of grandchildren on but instead gathers dust because camera batteries are slightly expensive and hard to find and I'm cheap and lazy. I'll give you a hint: this pack was great if you live in Anaheim. Inside the clear plastic holder lived a figurine of  Angels closer Francisco Rodriguez. The holder color generally meant what kind of figure you got. Clear was generally common. If you got black or Gold you were dancing. Francisco holds the record for most saves in a season. He parlayed that record into a big deal with the Mets.  That's sort of like winning a Nobel Prize for curing cancer and using that feat to get a gig as the ottoman in front of Satan's throne in Hell. Or front row tickets at a Justin Bieber concert. YOU SEE WHAT I DID THERE? POP CULTURE REFERENCE + SWIPE AT MY FAVORITE TEAMS'S RIVAL WHAT BEAT US TONIGHT. AWWWW YEAH. I AM A BLOGGING GOD. 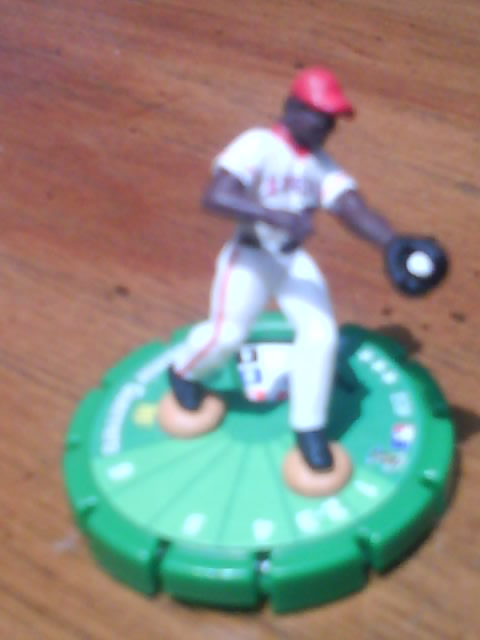 The other figure is of Angels slugger Vlad Guerrero. There's no way I can spell Vladimir right now so deal with Vlad. I apologize for the crappy photo, I was sure they'd come out better but they didn't. I'm guessing Vlad is a decent hitter in this game, but since this is the common version he is fielding a pop fly. He apparently misjudged it and ended up barely catching it at the last second. There are uncommon and rare versions of players with better stats and different poses. I'm guessing if Vlad had one it would be a batting pose. Probably swinging at a pitch around his ankles and still getting a 2 RBI-double off of the pitcher. This picture is pathetic. I was trying to show you the different numbers and symbols used in the game but instead I've got a good representation of what I see when I don't wear my glasses. To this day I still don't have a clue how this game is actually played. I know how the comic book version is played so I'll tell you that instead. The character starts on the base stats and as he fights the bad guys he has to 'click' his stats to the next set of numbers every time he takes a hit. The numbers change accordingly to the damage taken. There are also special powers and whatnot you can throw in to help you fight. This game is similar, except there are no fights. Just pitching and swinging. I'd like to see Vlad Guerrero fight Dr. Strange actually. That would be a good matchup.

I bought two packs of this stuff, the other one is still languishing unopened. At one point I  liked these things so much that I bought an entire box of them from a comic shop in Orlando. Unfortunately it was the 2004 extended edition, so I got a bunch of doubles of nobody middle infielders and about 4 Roger Clemens in an Astros uni. If this post makes the Hall of Fame I'll open the other pack, but the chances of that are about as good as these things coming back in 2011.

I remember them. I was given promo figures of Alfonso Soriano and A-Rod the weekend that they were traded for each other. I bet I still have them somewhere, but that's only because I'm a packrat. :)

Someone should really do funny Lego movies, but with these things instead.