Written by SpastikMooss at 10:10 AM
More stickers today, this time courtesy of 1995's Diamond The Mask Animated Series Sticker Set: 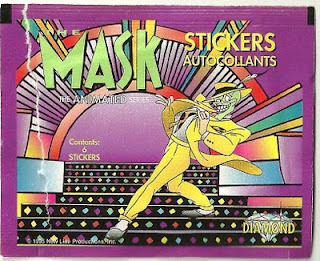 I originally thought that these stickers were put out by Panini, but they clearly weren't. Alas, on with the stickers, 6 of them in all! 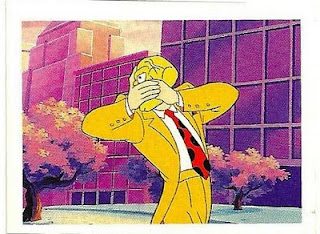 #25 - Like the Casper, none of these stickers have titles or anything, as they're all just meant for the book. So instead you get a random image from the cartoons, which I presume to be in show order by sticker #? I don't remember the show though, so that's just a guess. 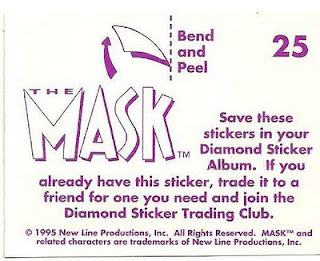 Not a whole lot to say about them - big The Mask logo, some promotion for the album, encouragement to trade this sticker if you have it (as if you wouldn't) - pretty standard sticker back. It was kind of interesting to see that New Line Productions was involved - they produced most John Waters movies, the Nightmare on Elm Street movies, and were responsible for the comic turn of 1936's Reefer Madness. So...pretty good production company in my eyes. 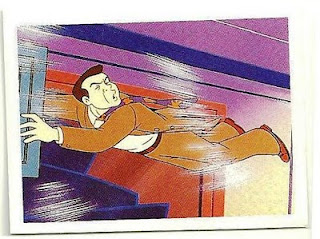 #57 - Yeah...I don't even know. I like to image that this guy is yelling, "NOOOOOOOOOOOOO," Stephen Colbert style. 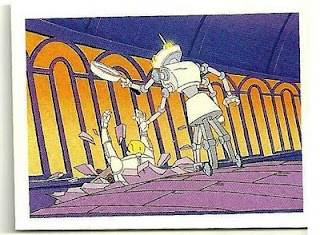 #84 - Some robot is beating The Mask over the head with a frying pan. Or he's entering the room from below and she's coming over to see what's up. Or something. 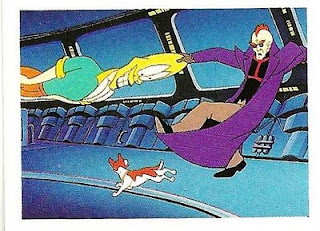 #37 - This dude is holding a giant Mask inflatable while The Mask's dog looks on in WTF-ment. Or...well I don't even know, these stickers are ridiculous. 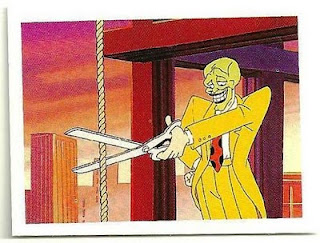 #15 - Ah, finally one that's easy to comprehend here. Other than the lack of knowing what's attached to the rope and all that other context mumbo jumbo. 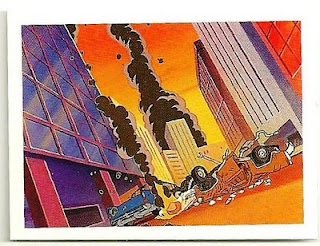 #69 - Last sticker, might as well be totally random. Mass destruction in town courtesy of someone/something.

And that's a pack of 1995's Diamond The Mask Animated Series Sticker. Yeaaah!

The first movie was awesome (I still can picture the scene when Cameron Diaz dries herself off after coming inside out of the rain!), but the animated series was horrible. I've never seen these before so thanks for the review.

Thanks dude! I loved the first movie too, as Jim Carrey was the man in the mid 90's and Cameron Diaz was, as The Mask put it, "smokin'!" Too bad the cartoon couldn't live up to the film. I'm sure I watched a few episodes, as I watched the movie tons of times and had action figures and everything. No memory of it though - repressed maybe? Lol

It's funny to see how different Cameron Diaz looks between then and now. It's like two entirely different people.

Also, this is up there with the worst card / sticker products I've ever seen. I somehow remain surprised in finding out about animated versions of movies and TV shows that never seemed to hit a TV screen. Stargate? The Mummy? Really?

And is it just me, or does #15 resemble a greenish likeness to our President?

hi, im from Chile and a MASK animated series fan, i get this album on ebay in 2018 all the stickers album is bassed in the first epissodes the greener side of the mask ihave the sticker album of Italy ans chilean too but the chilean sticker album is the most difficult of obtain cause we have only 8 peoples in all the country im in a personal proyect to restore the stickers