Written by deal at 6:53 PM
This almost 20 year old set was a near complete reproduction of the Classic 1953 Topps Set. The Cards are in the current 2 1/2 x 3 1/2 inch format rather than the slightly larger 2 5/8 x 3 3/4 inches of the originals. This pack was picked up as a bonus pack at a card show with several packs of Allen Ginter and Bowman Heritage. I think it was listed as $1.50 for a 12 card pack. 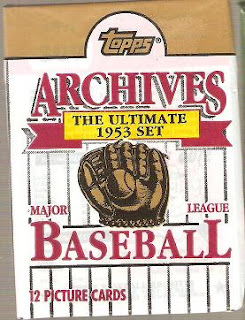 The Cards (clicking on any group shot will enlarge the scan) 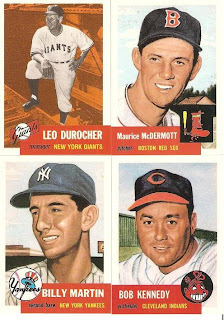 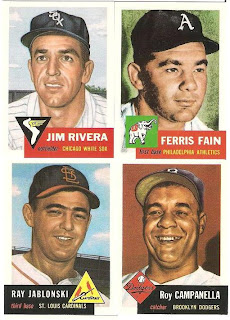 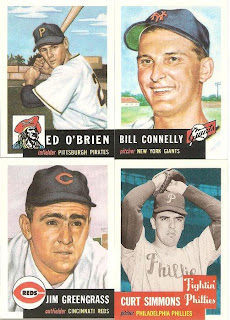 As with Leo Durocher above, Curt Simmons is a new 1953 card. This was the only Phillies card in the pack, of course I already had it. 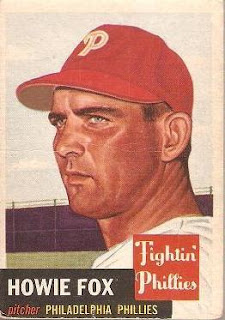 The Howie Fox card along with the B-Sides of Durocher and Campanella. The Durocher card was not part of the original 1953 Set and this is differentiated by having all of the Biographical text at the top in Black. The Originals had either all white text or a White Name followed by the demographic info in black (as it is on the Campanella card). On the Bottom of the Durocher back it is also specifies that the card is a member of "The Cards that Never Were".

It was a fun pack to open - Worth a buck-fiddy I suppose - Lots of star power: Campy, Billy Martin, Fain and Simmons are all good pulls.

For even more Baseball Card Drivel Check out Phungo.