Written by SpastikMooss at 11:03 PM
This one's sort of a weird "pack," as it's an in-video game pack from 2007 MLB Power Pros. You win points for playing games, and then spend those points on cards in the game. Collect em all - yeah! 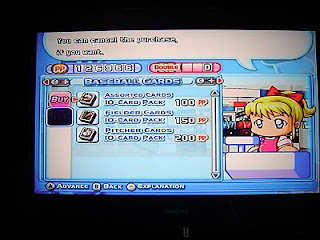 I bought an assorted pack. It was my first pack, so I got 10 new cards and 0 doubles: 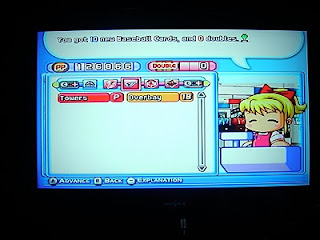 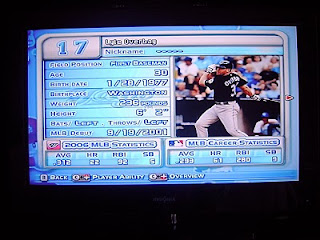 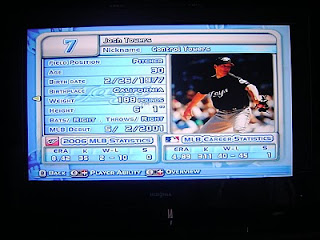 Next is Josh Towers - I actually used to really like Towers, though he obviously wasn't that great, as his 2-10 record and 8.42 ERA in 2006 shows. Last I heard he was a Yankee, so yuck, this card is less awesome now. 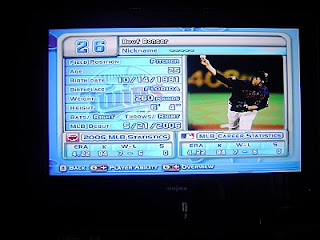 Boof Bonser - awww yeah, a great name in my first pack! It's funny that Boof's nickname section is blank, since Boof's real name is actually Boof following a name change several years ago. What a guy. 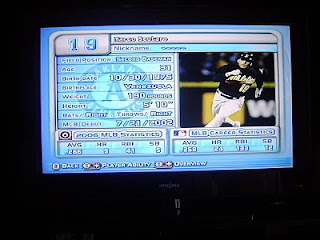 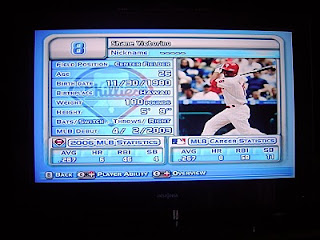 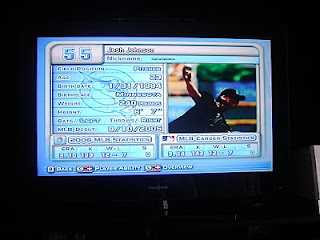 Josh Johnson - One of the cool parts of this game is that you have not only the 25 man major league roster, but also a 6-10 man AAA roster. Josh Johnson is on the Marlins AAA roster in this game, but he's the kind of guy who always gets pulled up to the majors when you actually play a season. My current AAA squad on my create-a-team features Micah Owings, who I hope to convert to an OF between seasons. Sadly I didn't pull any of his cards in this pack. 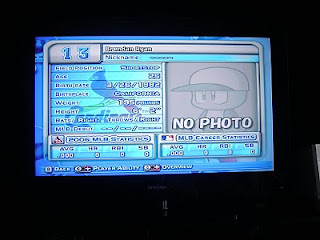 Brendan Ryan - ROOKIE CARD, AWWWWW YEAAAAAH! You can tell by the .000 average, and the default photo of your average looking player in this game. Because yeah, they all look like Miis. It's actually a wicked good game though. 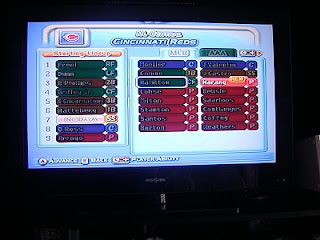 Here's a look at the card screens, which are separated by individual team. Lit up cards are cards I own, while darkened ones are ones I still need. I now have most of the screen since I bought a ton of cards after writing this post, but at the point of this picture, all I had was... 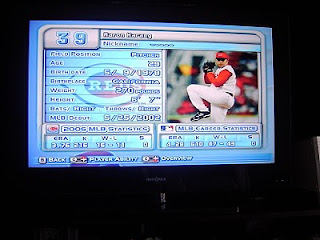 Aaron Harang. He had a great 2006, but since has just been kind of ehhhhhh. Shame too, because he was awesome when he was good, great strikeout guy and inning eater. 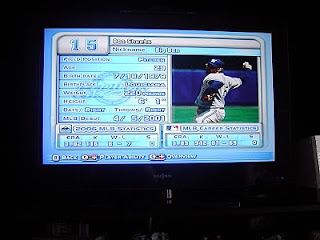 Ben Sheets, aka injury city. I think he and Rich Harden should join the same team, just to see if the world explodes or something when they both make 40 starts somehow. Great pitcher though. 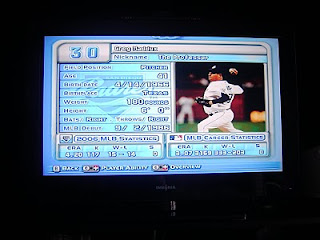 Last but not least, best card in the pack, Mr. Greg Maddux. 2nd nickname as well with "The Professor," and obviously my favorite since everyone loves Maddux. Nice finish Power Pros, well done!

If I ever get home to my parent's house, I'll be sure to purchase cards in all of my Madden games and the old World Series Baseball games. They're a lot more realistic and a bit more interesting, so I think they'd be cool for this blog. For now though, enjoy the random Wii-ness!

Great stuff!
I should really start playing this game again, although the trade system is flawed. First day I traded Ronny Cedeno straight up for Alex Rodriguez.

It's also great that they give cards to the AAA guys on here. Too bad you can't trade with other users via friend code or something.
--Jon

The trade system is so flawed, I agree! I like to either propose 10 trades at a time so I can wait on some, or have trades that are immediately accepted or rejected. In this game it takes (up to, and usually a maximum of) 5 days for any trade to go through. Even if it's just a salary dump or something, where I have a 100% chance of being successful.

Aside from that though, good game. I like the realistic stances.