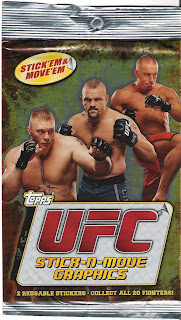 Picked these up at Target at some point last month. Not that into MMA, but it's on my radar to some degree, and I was curious to see what these were all about. I know the bigger names at least. These cost $3.99 per pack, provided the price isn't jacked up in your neck of the woods. They are really big, too big to fit in a 4"x7" bubble mailer. Before we get to who I pulled, let's see a few of the possibilities on the back of the pack. 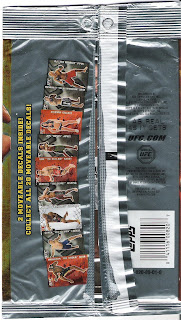 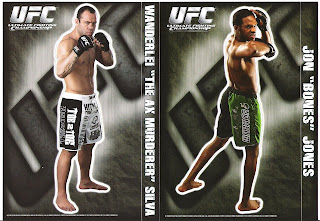 The chivalrous pervert* in me was hoping for the Arianny Celeste. But alas...

We've got Wonderlei "The Ax Murderer" Silva (33-10-1) and Jon "Bones" Jones (11-1). Pretty good I think, though Ray over at Shot Not Taken would know much better than me. I was hoping for someone not on the back of the pack, but I guess it doesn't really matter, since these are going to Ray as part of my end of a trade. They should nicely offset the suh-weet Masked Rider cards he sent me. Check my blog for that later in the week (cheap, cheap plug... pitiful).

That's all for this one, sports fans.

*Careful with that link, tvtropes is easy to get lost in...

Stick and move, STICK AND MOVE~!

Thanks again. The Axe Murderer is a legend and Jon Bones Jones is the biggest up and comer actually he beyond that. He is probably the best young fighter right now and some say it is only a matter of time before he becomes champion.