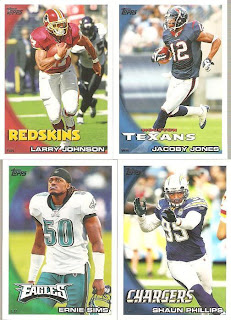 A PSU alum, and and a new Eagle. 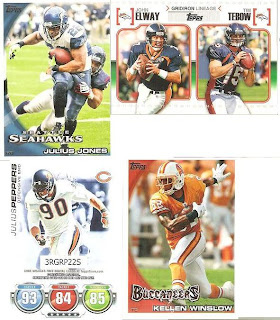 I am sure many folks will find the Lineage card a bit sacrilege. I didn't notice that the pack had been tampered with but the Winslow card is ripped badly at the center bottom. Doesn't really show up on the scan. 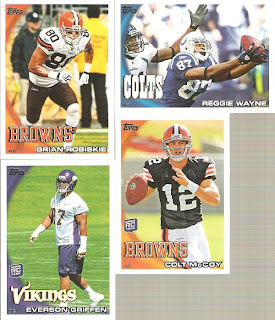 A Viking Rookie Card and Colt McCoy RC. Some of the premier rookies from specify that there are 5 Rookie cards in the set and what number the card is in that set. The McCoy is card 1 of the 5 card Colt McCoy Rookie set.

If there are any Browns Fans out there, I suppose that this pack would make them happy.

For a look at some inserts and other highlights that were pulled from a collection of packs click here.

As a Browns fan, woohoo!

Unfortunately my two favorite Browns are Josh Cribbs (who you didn't pull) and Seneca Wallace (who didn't make the checklist). So...wouldn't have been a great pack for me lol.

I don't think the Elwaybow card is sacrilege. It's a hobby tradition to staple a legend onto an as-yet-unproved but popular newbie.

That pack is about par for the course, I think, for a retail pack. Figures it's been tampered with.

Guess that goes to show you how smart and aware big-W checkers are when they can't bother to pay attention to product molesters stationed right in front of the register.

Isn't it possible that in some dope's search for a Rookie Premiere auto, that he might damage in in the process?

That pack creeper needs to man up and go to his hobby shop and buy a box of jumbo like everyone else, if he wants a reasonable shot at a rare auto.