Written by Ben at 12:50 PM
Greetings everyone. Here's my first post on this wonderful new blog.

If you've followed my other sites you'll know that my collecting days began in 1988 and I've set out on a project to complete the four major sets from that year. With Score under my belt, I thought I'd try to tackle Fleer.

When the box arrived this morning and I cut open the wrapper (yes, it was still in shrink wrap, so no pack searchers here!) a realization struck: "I've never opened a pack of this stuff in my life." To this day I remember what a pack of '88 Score, Topps and Donruss look like, but I'd never seen these nice deep blue wrappers before. I struggled with my camera for about ten minutes, but couldn't get rid of the greenish tint, sorry.

What do we get here? Fifteen cards, plus one sticker card.

This should be fun.

Score set the bar pretty high in terms of photography in the late 80s, and while this Fleer set doesn't quite measure up, it is a notch or two above Topps and Donruss.

There's a nice assortment of action shots and classic posed shots in this set. There are some boring shots, but that's pretty hard to avoid.

When opening a pack of junk wax there are a few things I always look for. I'll deem a pack successful if it has one of the following: a Hall of Famer, a player that I really like or an old Expos uniform.

This pack did pretty well for itself. 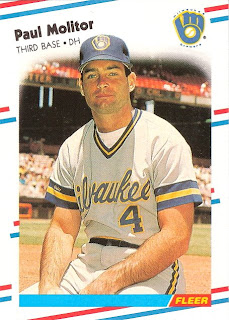 The Hall of Famer. 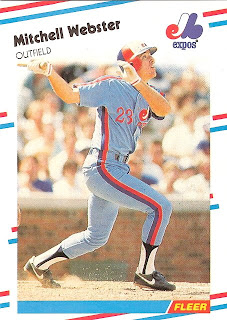 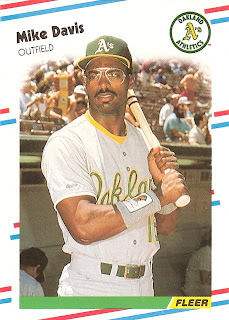 And just for good measure, some gigantic, 1980s glasses, and some spiffy wrist bands.

One last thing before I leave you. The sticker. 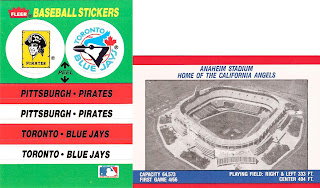 Pirates and Blue Jays logos. On the reverse, an old shot of what's now known as Angel Stadium of Anaheim (why oh why can't they just be called the California Angels again).

And there you have it. 1988 Fleer. If you liked what you saw here, please visit 1988 Fleer to see the rest of the box break.

Email ThisBlogThis!Share to TwitterShare to FacebookShare to Pinterest
Labels: 1988 Fleer