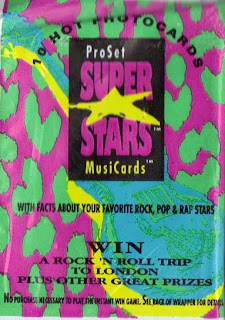 Wow, ProSet was into everything in 1991, weren't they? The law ruled that Topps could not hold a monopoly on trading cards and the world went nuts... And speaking of nuts: 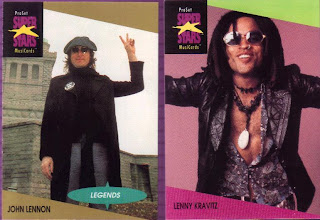 We start the pack off with John Lennon "Legends" card. My mother always said that if I didn't have anything nice to say, I shouldn't say anything.... But then, she wasn't a blogger then either... I'm just sayin this: "Give Peace a Chance" didn't work out so well for that guy.... Just sayin. Next is Lenny Kravitz, who was only a few years into his career when this card was made. Why do musicians and actors feel the need to say they "want to try and help make a difference?" Really, I don't care if they make a bazillion dollars doing what they do - that what we pay them for in movie tickets, concerts, etc. Then again, if I had their kind of cash flow, I'd be trying to do something to benefit someone else, too... Dang conscience... 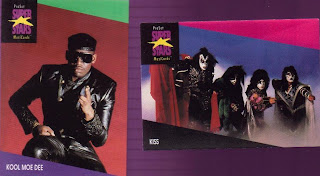 I cannot tell you how many times I played "Wild, Wild West" in every remix rendition I could get a hold of in the late 80's/early 90's. The kicker? That is one of my son's all-time favorite songs now too. That's actually kind of scary. What is it with me and KISS cards!? Well, here are the boys-in-black('n white) once again... Yes, I had KISS 'action figures' as a kid. I admit it. Yeah, and the sound stage thing, too... 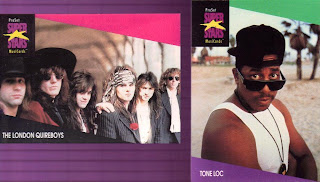 The London WHAT!? Oh... Quireboys... Yeah, never heard of 'em. Tone Loc, however, was everywhere on the radio, provided the station could get hold of the edited versions of his songs. The public was clueless as we ran to the record stores to buy up his tapes then listen in shock and awe at the language pouring out from our cassette decks. It was great! 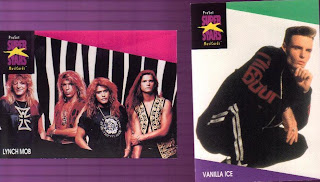 Lynch Mob is another band I never heard of - or don't think I have anyway. I'm guessing no one else had when these cards came out, because the back actually lists who they are and what they did for the band. And to the other end of the spectrum, we have a guy we *WISH* we hadn't heard of... Yes, I had the tape. Yes, I watched MTV. Yes, I burned the tape (along with my Milli Vanilli) once the party was over. 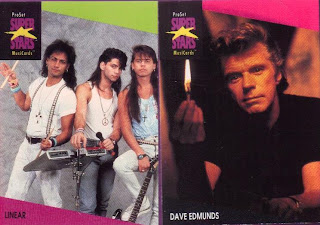 Linear!? Big hair, no idea. Again, never heard of 'em. But, they are followed by Dave Edmunds doing his best "Doug Jones Flaming Balls" imitation!! Wait, maybe Doug was imitating Dave... Wow, this is going to require a bit of resear... no, not really. 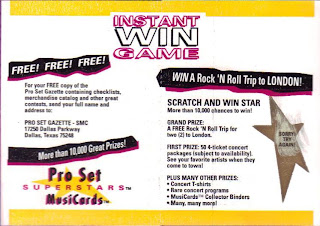 The last card in the pack is a 10-cent coupon. That's right, save enough of these bad boys, and you could get up to 50% off a Superstars Music T-Shirt! 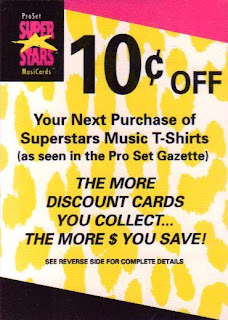 Wait, now I have no idea how much a T-Shirt was, but let's go with a 'standard' price for 1991 and say $9.99 per. The most we are allowed to claim (according to the back) is 50% ($4.99ish). So, I would need FORTY-NINE of these cards. At one-per-pack, that's basically FIFTY packs of these cards to save FIVE bucks. Wanna bet there is a warehouse full of these shirts somewhere?

Oh, at the top of the back of this card, it reads: "This beats stamp collecting, Dudes!" Yeah, for the money, I'm not so sure about that....

I did manage to find a web page with way more information about these cards than anyone really wants - great stuff! You can find it: HERE!

I have tons of these cards. I bought a box at some point. No idea why. I have no idea what to do with them.

Stumbled across this article while doing some research on the Yo! MTV Raps ProSet. Good write up, but I should point out even I have heard of Lynch Mob and they're not a rap group (that was Da Lench Mob). Lynch Mob was a Dokken spinoff fronted by their guitarist George Lynch, Fascinating no? Oh well. Pays to be a child of the 80's I guess.

Lynch Mob was Dokken guitarist, George Lynch's band after he departed the aforementioned Dokken. They were a lot harder than Dokken, but never had a hit song, so not too many people remember them.

These are fabulous time capsule items.

They seemed like such a good idea at the time. Too bad Pro Set printed more on paper than any banana republic.

I wonder if Borat can use these as money in Kazakhstan. "Mmm, I trade to you one Madonna, and you give for me three Taylor Dane and a Night Rangers, yes?"

I collected these when I was 20 years old. I traded them with a 9 year old girl on my block named Dana. I still have them kept in a binder with plastic sleeves, and in mint condition along with the contest cards and a coupple of the plastic wrappers they came in. I thought I had them all, until I read someones comment that he's missing #303. I have up to 260. How many were there and how can I get the rest of them? Please email me at joeybinky@yahoo.com if anyone knows where I can get the rest of the collection.