Written by --David at 5:18 PM
When I first read about this blog, I thought to myself, "Wow, something that's going to compete with APAD (A Pack A Day)?" And then, I read the not-so-fine print: One of EVERY wax pack... I began salivating right then and there. Before I signed on to this endeavor, I sent an email making sure I read that correctly. Sure enough! And, I was told, "The weirder, the better!" Oh, man, this is just what I've been waiting for (and why I didn't think of it, I'll never know!).

I immediately jumped on eBay and bought several non-sport lots, giving myself plenty of ammunition for posting.... And then I had to wait... and wait... and wait... Well, I got a call from the boss-lady and she asked me to teach a group of teachers some technology on Friday and in return, I got a free night at a hotel. Sold, since I already had to attend a meeting today (Thursday) anyway!

After the meeting, I checked into the hotel and headed straight for the local card shop to pick out some non-sport fun to post on here. Turns out they don't carry any non-sport. They don't even carry (and I was actually thankful) Yugioh or Pokemon cards. I was told to go to Toys-R-Us, Target, or Wal-Mart. I hit TRU first. Aside from the aforementioned monster-related packs, they only had boxes of Bella Sara, High school Musical, and Spongebob Squarepants - not even packs, but blaster boxes only. While I do like me some Spongebob, I sure did not want to bust open a whole box of the stuff. So, off to Target, where I found several non-sport packs and randomly chose this one as my first post: 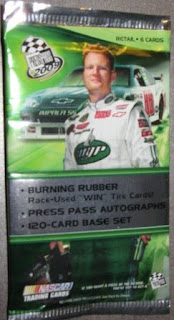 Shiny, green, pack. I don't know enough about NASCAR to know who the featured guy on the pack is (and I'm sure I'll be chastised for that). Anyway, there are six cards in the pack and I have a chance of pulling a "Race-Used WIN Tire Card." Really? A tire? Not even a uniform? Really, a tire? Okay then... Let's rip some wax: 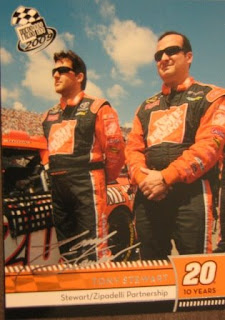 Tony Stewart (I've heard of him!) and Greg Zipadelli (yes, I looked at the back of the card. And, his name sounds like it should be a chain of sandwich shops.) Evidently, these two have been together for 10 years and that is a record. I suppose congratulations are in order... 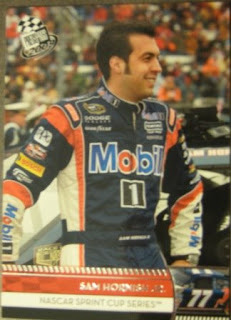 Sam Hornish Jr. The back of his card features his race stats for the 2008 season. You know, card companies should list player salaries on the back of baseball cards the way the winnings are listed on these. Now, that would be something to talk about.

Okay, here we have: 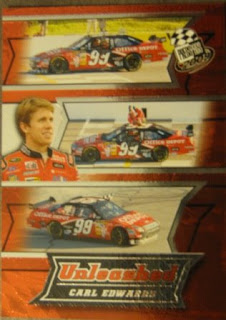 Carl Edwards UNLEASHED. This is evidently an insert set. The card itself is metallic/foil orange-as-all-get-out. I'd say more, but really, I have no idea.

The next racer is: 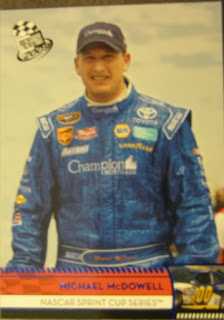 Michael McDowell (not to be confused with McDonald nor Sam). He looks like he just walked across the desert and someone asked him if he'd like some salted pretzels. 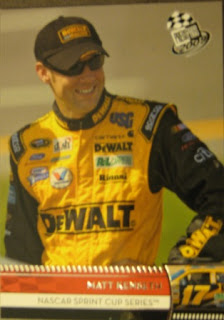 Matt Kenseth. He's very black-n-gold. He was 12th in series points and his card number is 12. How serendipitous... 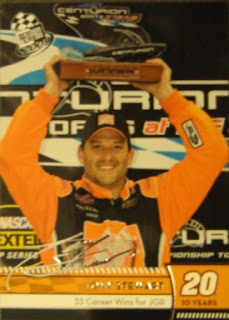 Mr. Stewart makes another guest appearance. These are evidently cards chronicling his 2008 season. I find that kinda funny since he is obviously not the guy on the pack, right? I guess it's the whole "10 years" thing...

Well, there you have it. My first post on APTBNL... Hmmm, I admit, it does not quite have the same ring as "APAD." Then again, no other acronym would make this site what it is, and what it will become: A seemingly random mix of anything and everything ever wrapped in wax.

#1 Awesome 1st post and congrats for picking up some NASCAR!
#2 Nascar is not non-sports. It is a sport.
#3 the guy on the front is Dale Earnhardt Jr.
#4 the post jinx is in as Tony and Zippy are no longer a team
#5 Awesome 1st post! (I know I said that twice, but it's true.)

Thanks for beating me to the punch Capt!

I second all he said.. and yes nice post!

Oh, you know, I meant no disrespect by calling it a non-sport... But, that shows you just how much I don't know about it! :-)

Thanks for filling in the gaps, and thanks for your comments! This is going to be a LOT of fun.

Zippy is married to a gal who is from my area.

This is big NASCAR territory here. I don't follow the sport for a second, but I know all the drivers. That's how much I'm surrounded by the thing.