Written by Alec at 9:02 PM
So this is a Tristar all-minor-league set. Since I really don't know about prospects or anything like that, most of these people are unfamiliar to me. But that won't stop me from opening it! And now, the cards...
#286, German Duran (As a massive Duran Duran fan, this card is kinda cool...) 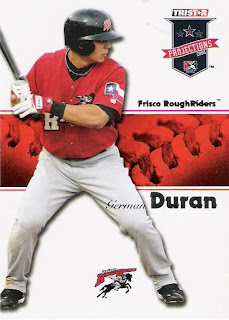 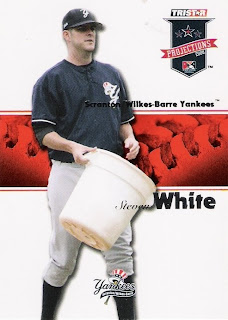 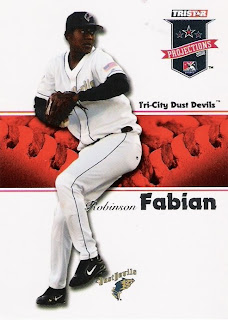 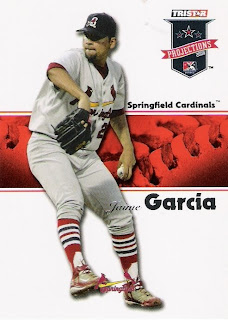 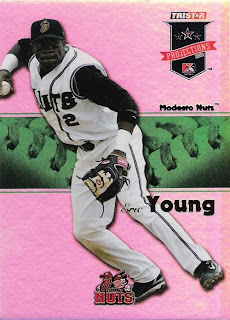 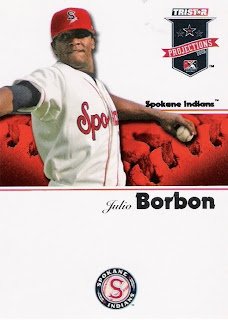 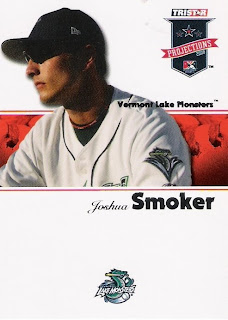 #297, Michael Brantley (look at the intensity on his face...wow) 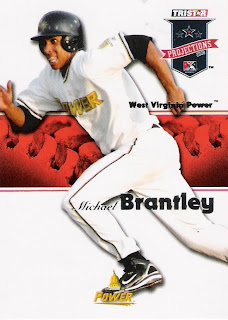 Alright pack, I guess, but upon looking at the backs I noticed something really bizarre. Let's look at a few of the listed birthdates of some guys in the pack: Eric Young, 5/26/89; Julio Borbon, 2/21/90; Joshua Smoker, 11/27/92; Michael Brantley, 5/16/91. Sounds pretty realistic, but if this is right, then Mr. Smoker here was only 15 or 16 when this product was released, and I personally think that'd a tad to young to be playing professionally, right? So I looked up their birthdays on milb.com, and here's what I got (in the same order): 5/25/85, 2/20/86, 11/26/88, 5/15/87. See a pattern here? The birthdate listed on the card is always four years and one day later than their real birthday. All the other cards in this pack do that too. Anybody know if this is a consistent error, or if I just got a strange pack?

Great pack! Man, so the Vermont Lake Monsters are named after Lock ness, because (as Discovery Channel would have us learn) The Catskill mountains were actually formed in Scotland (if you subscribe to the whole Pangea theory). Good conversation starter, anyways.

That is very weird about the birthdates! And, thanks for the geography lesson, Dubbs! I love learning goofy things like that. Cool!

Hmm... I got a card from that set in a trade, and I think it must've been a bit off, because going by the birthdate on it, the blurb on the back would've had the dude playing professionally at 13! I really must find that card. It was teh lulz.