2003 Wizards of the Coast Simpsons TCG

Written by --David at 9:43 AM
Before I get started, I just want to say that for the record, the horizontal cards are horizontal on my computer. why they came in as vertical on here, I have no idea. I blame the clown.

In case you cannot read the text on the pack, it says, "Please buy an extra pack. I've got a wicked balloon payment coming up." get it? Balloon payment? He's a clown? Maybe not quite as funny with the economy in the toilet these days.... 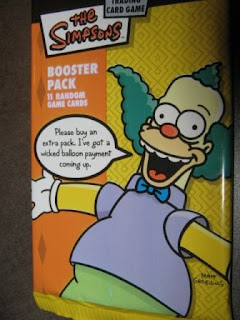 I admit it. I have seen the Simpsons twice, ever, that I can remember. Take a moment. Let that soak in. Yes, I said, "EVER." I never jumped on the Simpsons bandwagon for whatever reason. And so it is with absolutely no knowledge whatsoever (hmm, that seems to be a theme with my posts on here), we embark on an adventure into the world of The Simpsons Trading Card Game. The first two cards are Dr. Nick Riviera and Bumblebee Man: 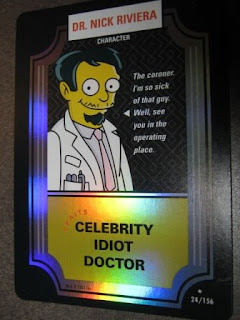 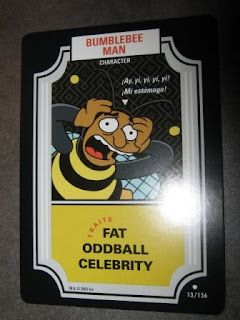 I like these cards because of the three-word descriptors: "Celebrity Idiot Doctor" and "Fat Oddball Celebrity." I would have to assume that something happens when these cards are played together because the both have the word "celebrity" on them. and, BBM is complaining about being in pain, though I would have guessed stomach from 'estomago' even though he is holding his head. I could be wrong. The "DR" card is a foil insert. It's shiny!

Next, we have Jasper, the bitter old uptight coot (wow, four words for him) and Revered Lovejoy (upstanding uptight lazy reverend): 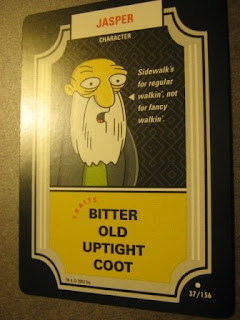 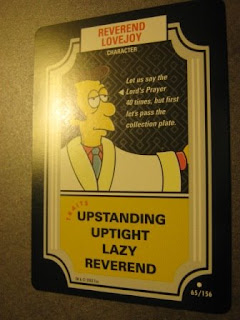 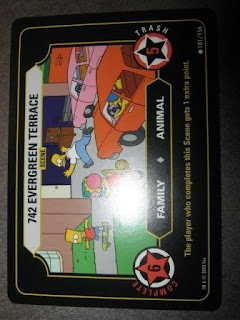 If you turn your head to the side, you'll be able to read them. Maybe. I dunno, I didn't try it myself. Pretend they're emoticons. I'll help. First is "742 Evergreen Terrace." Evidently, the goal is for players to 'complete the scene.' I assume that means a player would have to come up with a 'family' card and an 'animal' card? And I have no idea what the 'complete-6/trash-5' means. And I don't want to know. (heh-heh, sorry couldn't resist the urge to throw in a little Stephen King story quote there, folks. Move along.) The second card is Krusty's Clown College - Fat, Idiot, Oddball. Hey, Bumblebee Man is two out of three there!

The final scene card is "Whacking Day!" (oddball/animal) and we also have a very red Bart "Take a peek" card: 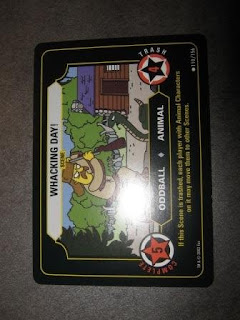 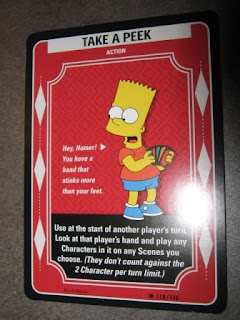 I am starting to really wonder what the rules are to this game. That is, how does one decide if a scene is trashed or completed? In any event, should this one be trashed, everyone moves their animal cards from this one to other scenes. Is that good? is it bad? Is that a wrap? Nope, we have Bart holding a card that lets the player sneak a peek at another player's hand and then play the other player's characters in any scene the Bart-holder chooses. Confused? Does it matter, really?

Ah, here is Sally or Susan or Magpie or whatever the girl's name is (yeah, I could look it up, but why when I have you guys?). Seriously, though, it'll bother me to no end if I don't look it up. Dang it. LISA! There we go, now we can all rest easy. Lisa sports a pseudo concert-used reed chip. I say that because even though there is one on the card, it is only a picture. Now, had they included a real reed chip, that would have been cool. Or stupid. You decide. Lisa is followed by good ol' Krusty himself. He's got "Star Power!" Player gets to flip three cards and play any celebrities on any scene. That is some serious power there, people.... 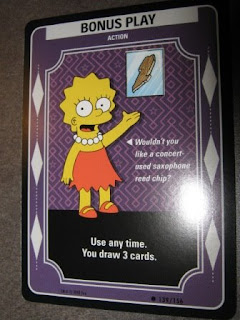 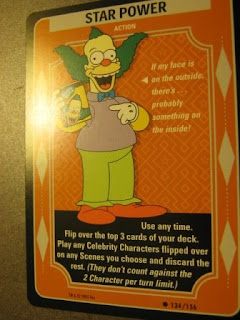 Finally, we've got Stampy (pachyderm, family, animal). Hey, lookie there, Stampy would fit nicely on the scene card we saw. POW! Two puns in one sentence - I am on a roll here, folks... The final image is the back of the card, just so you can see what it looks like. I'm nice like that: 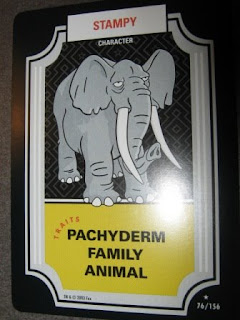 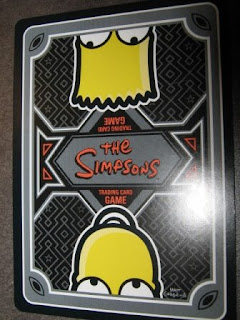 And so ends a walk through Springfield by way of a discount wax pack... Until next time, may your packs be plentiful!

Email ThisBlogThis!Share to TwitterShare to FacebookShare to Pinterest
Labels: 2003 Wizards of the Coast Simpsons TCG