Written by Matt at 5:11 PM
2007 Fleer Ultra. We're not talking regular Fleer here guys, this stuff is U L T R A. I spare no expense for you folks.

I kid. I actually miss Fleer baseball products a whole heck of a lot. How would you rather spend $.99? On a pack of Topps Attax? Or Upper Deck First Edition? Or how about a pack Fleer? You'd rather have the pack of Fleer. Yes, you would.

This pack was the last in a value priced blaster I found a Toys "R" Us in Langhorne, PA. 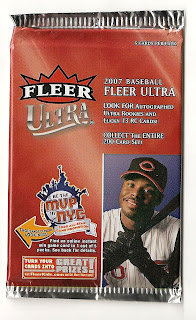 Junior graces the wrapper. He looks happy enough to be there. Let us tear in. 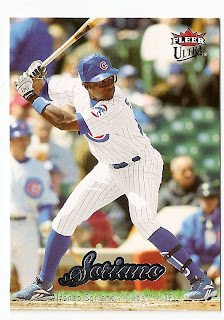 #30 Alfonso Soriano. Fair enough. He hits the ball hard. However, his defense is mediocre at best and that ridiculous hop he executes while fielding routine fly balls drives me up the wall. 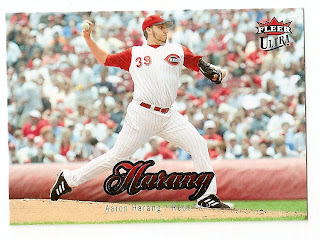 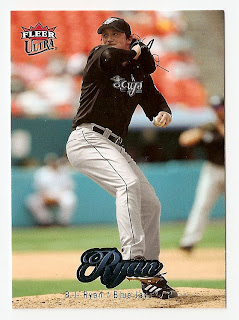 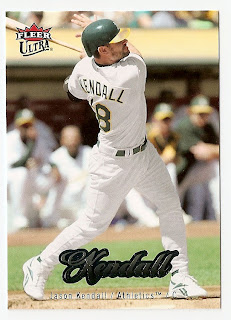 #129 Jason Kendall. Really impressive career BA for a catcher. Combined with his talent behind the plate, he is probably one of the key underrated players of his generation. 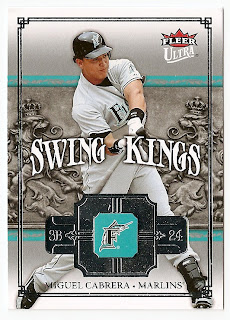 SK-MC Miguel Cabrera. He is a Swing King. This would be a good spot for a Benny Goodman or Dire Straits joke.

This card wasn't in the pack chronicled in this break, but was found earlier in the same blaster. 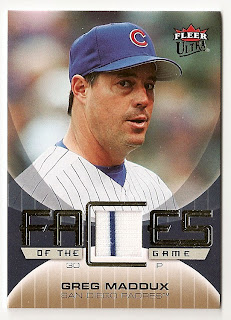 Thus concludes my first review for this ambitious site. The name is Matt (in contrast to our noble leader, Matt F.) I love the Phillies, live in New Jersey, and like baseball cards.

Dang, I just bought a pack of this for a buck and was going to post it! Oh well. Funny write up - I look forward to opening my pack even if the only person I can share it with is myself.

I better get to posting here before everything is taken!

Feel free to post more than one post on a single product...especially if it's a great pack.

Ah - thanks for the green light! I'd hate to have a great pack go unnoticed on the internet because it's already been posted.

This site is seriously the next best thing to opening packs in "real life". I saw some truly ridiculous packs at the shop today... I'll pick some of them up in the next week or so. I've got a couple from today to post, hopefully by tomorrow morning.

On the off chance the Matt that posted this pack goes back to read comments two-plus weeks later and sees this - I'd love to trade for that Maddux relic if you're willing to give it up. Feel free to email me at communitygum at gmail
--Jon