Written by Dan at 8:01 AM
I officially have a nostalgia problem. This book and the stickers to adhere inside it was really the focus of my collection when I was a child. I have no idea where the originals are, but I remember the cover being ripped off and the team statistics on the inside cover being colored in for the league leaders.

I recently bought a new book and a 100 packs. This is the 7th pack I have opened.

Here is the wrapper. Donny Baseball on the front, an offer for an official World Series or All Star Game baseball from 1988 on the back (only $6.95 with 20 empty sticker packets). Each pack has six stickers;including one foil. 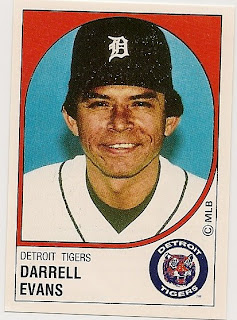 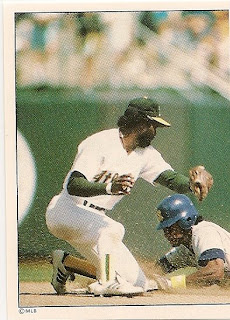 Each team page had a double sticker action shot. This is on the A's page. I believe it's Alfredo Griffin tagging Mickey Brantley. 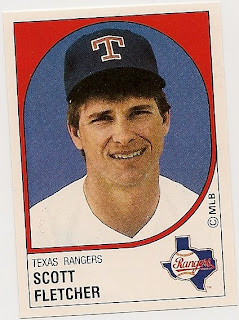 206-Scott Fletcher, Texas Rangers,I like the team logo. I don't really remember seeing him play. He was a decent hitting middle infielder. 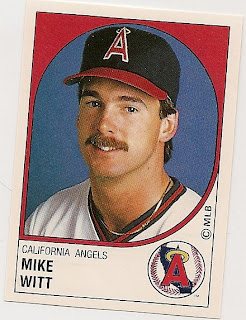 38-Mike Witt, California Angels, one of the chosen few to throw a perfect game in his career, and also one of the more unlikely candidates, averaging 8.8 H/9 and 3.0 BB/9 for his career. He had a good run, throwing close to 250 innings for 5 years in a row in the '80s. 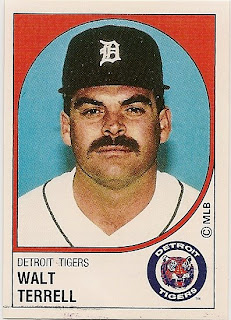 87-Walt Terrell, Detroit Tigers,showcasing a classic '80s 'stache. He was a league average pitcher for a couple years with the Tigers, but soon fell off the pace(career ERA+ of 93) 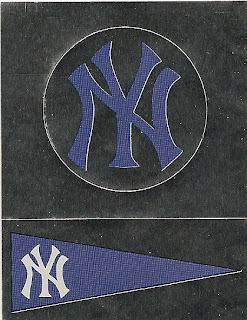 Here's my foil. It's not a very good one. The circle goes on this poster thing in the middle of the book. The pennant goes on the last page with all the other team pennants.

I like those sticker sets. How many are in this set?

According to the sticker book, there's 480 possible stickers to get.