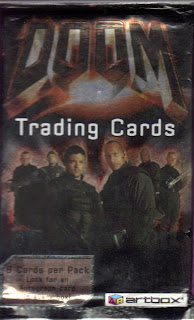 I loved DOOM. The game, not the movie. DOOM was the first game that we learned how to use the bare essentials of the IPX protocol in order to play over our local network. Our boss was thrilled, as you can imagine.... Well, we eventually came to an understanding that we would only play after hours and/or at lunch.

Many years later, Universal tried to take a first-person shooter and make it into a movie. And, Artbox tried to take a pseudo-FPS movie and make cards out of it. Notice Topps did not do this, nor Upper Deck. Somewhere, a business model was actually working. 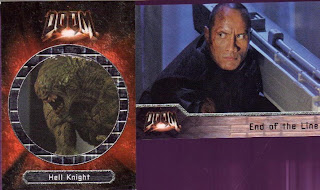 I have never seen the movie. I heard it did not do justice to such a cult-classic game. In fact, I think I was told, "It sucks. Don't bother." And so, I didn't.

I will most likely see the movie at some point. I can only hope the movie is brighter than these cards. These have to be some of the darkest cards ever made. I have to hold them in the light just to see what's on them.

I wonder if Dwayne Johnson ever played the game. That would be cool if a prerequisite for being in the movie was that you had to play the game.

I remember the first time I learned what "BFG" stood for, and then of course "IDKFA" was soon to follow... If anything, these cards brought back some great memories of a game where jumping was NOT an option....

By the way, there's a Checklist, if you're interested!