Written by --David at 11:21 AM
(Note, a translation has been provided at the end of the post, for those who don't speak "broken friggin Eyetalian"). 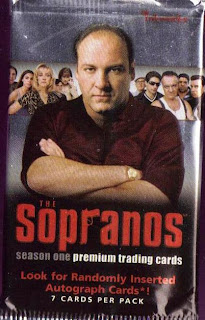 Hey, you. Yeah, I'm tawkin to yous ova dair. Look, I gaht a pack uh cawds ova hea. You wants I should open 'em up for yahs? Yeah, I thought so.

Now, look, I ain't never saw no "Sporanos" on no HBO. The wife and I, we dohn liyk nun uh dat "premium channel" stuff. So, juss look at da cawds and shaddup abaht it. 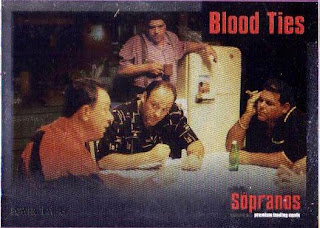 Wut yous see hea is two people dat frigged up a hit on my man, Tony ova dair. I d'own really know wut 'append to dem, but I wuld guess dey got dairs! 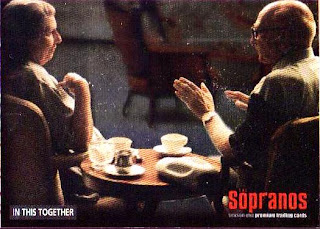 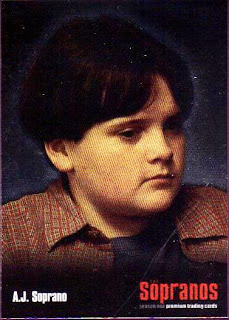 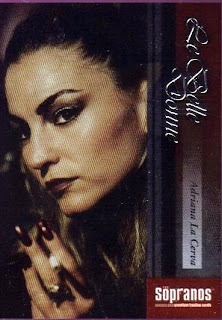 Look, I gots no idear wut's goin on in dis one. Tre guys on a ballfield or sumtin. The guy on the right is like, "Hey, you friggin want this or what!?" 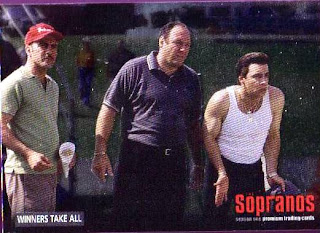 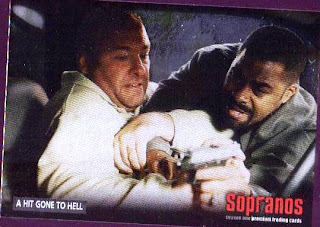 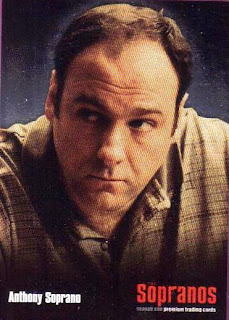 *Translation of comments above:
1. I received a pack of Sopranos trading cards. Let's see what's inside!

2. My wife and I do not subscribe to HBO and I have never seen the show. I'll try to comment on the cards themselves, however.

3. These two folks evidently botched a hit on Tony Soprano. Since I never saw the show, I can only imagine they received their just desserts...

4. A.J. Soprano, acoording to the back of the card, plays video games all day, but loves and respects his father.

5. Next, we have one of the "La Belle Donne" insert cards. This is Adriana La Cerva, card BD-6. Nice!

6. I'm not sure what's going on here, and the back of the card is no help. Looks like some game of cat-and-mouse, maybe?

7. The back of the card doesn't elaborate, but it looks like maybe this was the botched hit job that the other card refers to...

8. The man himself, Tony Soprano. There's quite a difference between this photo and the one on the pack...