Written by Joe S. at 2:01 PM
If you were too cheap or couldn't afford 2000 Ultimate Victory, Upper Deck was thoughtful and inclusive enough to provide collectors with a cheaper, less glossy and less foily version, Victory. I'm still too cheap for the fancy version. 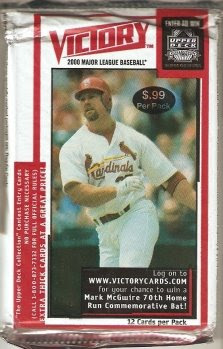 When I sort through the $1 bin I look for packs that I’ve never purchased before. Ideally, this means even the look of the card will be a surprise – good or bad. And for a dollar, it’s usually bad. 12 cards per pack, none of them with a chance to be a double of something I’ve already obtained – how could I resist?

Nice to see someone other than Ken Griffey, Jr., on a pack from this era, too.

The front of the pack promises “The Upper Deck Collection” contest entry cards (no purchase necessary) and extra thick cards at a great price. What a bargain!

#12 Craig Biggio, #105 Steve Finley, #217 Robert Person. A future Hall of Famer (Biggio) was a nice way to start things off. Steve Finley is rumored to have played in the same adult baseball rec league I’m in, though in a much higher division. Don’t know if that’s a cool stat about me or a pathetic stat about Finley.

#363 Rookie 2000 Derrick Gibson, #213 Scott Rolen, #316 Chris Singleton. Never heard of Gibson when he was a highly touted rookie. I would’ve thought the Rolen was a good card had I actually opened this pack in 2000.

#27 Matt Stairs, #297 Brad Radke, #188 Derek Bell. True story: I was at a game where Stairs busted his knee after it buckled from a high and inside fastball. I think the pitcher was Roger Clemens (it was A’s – Yankees), but I’m not certain. Saying it was against Clemens makes it a slightly better story, so that’s what I’ll stick with. Bell was most famous for “Operation Shut Down”, which he instituted after learning he’d have to compete for a starting gig with the Mets.

#288 Jeff Weaver, #225 Kris Benson, #398 Junior Circuit Ken Griffey, Jr. Weaver crumbled under the pressure of New York, and Kris Benson is more famous for his crazy wife (google Anna Benson). The Junior Circuit subset card is kinda nice. Including the back of that card, there are nine pictures of Griffey. That’s gotta be some sort of record.

Contest entry forms, which have been expired for nine years.

Two future Hall of Famers – including one subset card – makes this a decent pack for a dollar, but when a pack has “$0.99″ already printed on it, you know you’re not getting anything good! Nothing Ultimate about it.