Written by matt. at 7:38 PM
Price: $5 from the weird place in the rough part of town that sells cards, coins and heating oil futures (although I only had $4 so I owe a dollar to a man who, frankly, I'd rather not owe a dollar to).

Cards available?: Everything but the Yaz.

So I remember DKs like most of you do I imagine: as a popular but completely bizarre subset that led off Donruss base sets from 1981 to sometime in the 1990s around when I stopped collecting cards in order to focus on not having a girlfriend. In addition to the generally ok but sometimes disastrous Dick Perez paintings, the set also featured a shockingly convoluted system for player selection. If I remember correctly (big maybe) each year Donruss picked a player from each team. However, a player could only be a DK once every four (or is it three?) years. In other words, because 1) the Padres sucked in the early 90s and 2) Tony Gwynn appeared as a DK in 1989, my parents storage unit is currently holding about three pounds worth of 1990 Ed Whitson DK cardboard fire kindling. I want to meet the guy who would have complained pulling a 1990 Gwynn DK, because, damnit, Ed Whitson deserves to be recognized.

Anyway, this is a whole set of DKs, featuring players current, past and something called a Merkin Valdez. 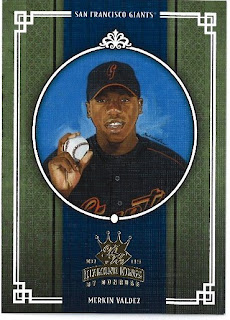 I'm presuming this is a rookie card just mostly because I don't want to think I paid five bucks for a pack including a third year Merkin Valdez. But just in case I'm not going to look. Apparently Merk went by "Manny Mateo" before that was found out to be a pseudonym attached to a fake y.o.b. as well. I'm not an expert on Dominican nomenclature, but that just sounds like the fakest of all possible names this side of Ron Mexico.

Next up is Richie Sexson. These cards have a really nice, canvas-like matte finish. Paintings are ok, but really small. 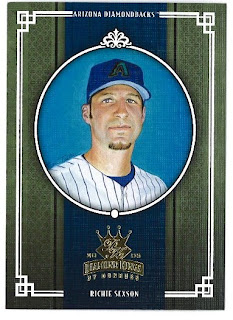 Jack Morris. Best so far, although there's something kind of stiff about the painting, particularly in the mustache region. 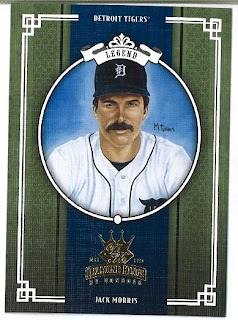 As I'm sure you know, Morris ranks third in Bill James' Clutchstache Ratio. For those of you of the less sabermetric persuasion, Clutchstache Ratio is like James' more famous Power/Speed number but instead of combining Home Runs (HR) and Steals (SB), it puts together Awesomeness of Mustache (AoM) with Awesomeness of Postseason Play (APP) in order to derive a single number. A perfect score is a 10.

Yaz. I'm a Boston guy so this is a nice pull. I'll probably give it to my mom who used to sit along the left field line at Fenway and make dreamy eyes at the franchise's second greatest left fielder ever (after Mike Greenwell of course). Nice card, but why is the painting so small? 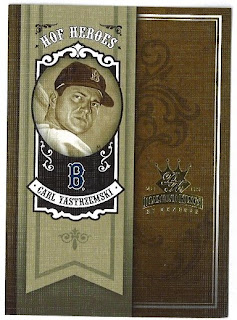 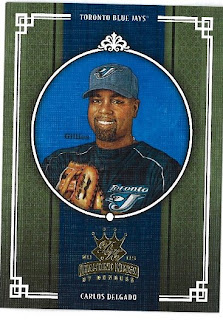 Post if you want any of them other than the Yaz.

Boooo, Yaz card! I can't stand cards that have huge gaps because of their relic parallels. It's really not hard to stretch an image.

Sigh. Dick Perez. Is he ever going to go away?