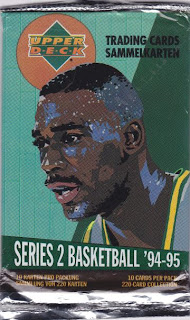 Today is NBA Draft Day, so I thought I'd throw a little hoops at you all. Here's a pack I picked up in a dollar bin at a card show awhile back. Let's check out the sammelkarten. 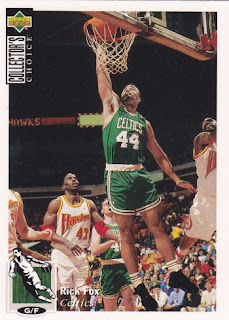 244 - Rick Fox (Few players in league history disgust me more than Rick Fox. At least this was in his pre-Lakers days. Fox was the 24th overall pick in the 1991 draft, taken by the Celtics.) 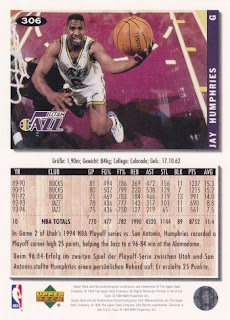 306 - Jay Humphries (Humphries went to the Jazz fairly late in his career as I mostly remember him as a Milwaukee Buck. The Bucks have always been the NBA team I forget about the most - as in, at times I completely forget that they exist. Humphries was the #13 overall pick in the 1984 draft, taken by the Suns, who could have picked John Stockton. German text on the back!) 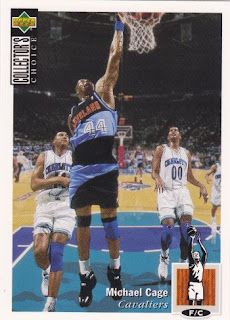 347 - Michael Cage (This was from a rather hideous era of Cavs unis. Cage was the very next pick after Humphries, taken by the cursed Clippers franchise.) 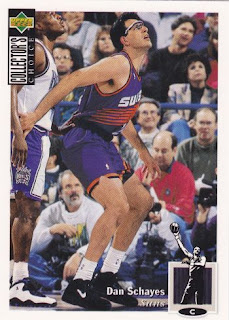 363 - Dan Schayes (For some reason, Upper Deck sticks to their ridiculous "last 5 seasons" rule with showing stats on the back, but they gave Schayes the full career treatment and just blended his photo on the back with the stats. You'll have to take my word for it, though. Unless you really want this card, in which case I'll mail it to you. Do you want it? Please say yes. Schayes was the 13th overall pick of the Jazz was back in the 1981 draft, who could have picked Larry Nance or Eddie Johnson instead.) 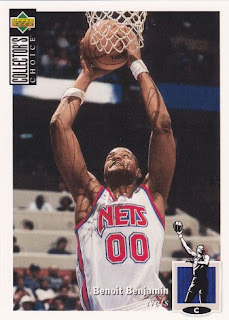 300 - Benoit Benjamin (Benjamin was the 3rd overall pick of the 1985 NBA Draft, selected by the Clippers. Did I happen to mention that they were cursed? They could have picked Karl Malone, Chris Mullin, Xavier McDaniel, Detlef Schrempf... well, at least they didn't pick Jon Contract Koncak.) 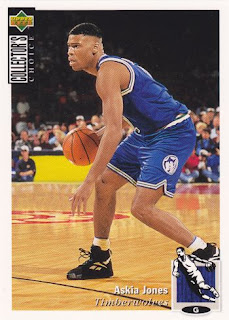 360 - Askia Jones (Here's the lone rookie of the pack. I have no idea who this guy is. I've heard of most NBA players, I suppose, though this was definitely from the period of time in which I paid attention to sports the least. Jones was undrafted and logged a grand total of 45 points in 11 career NBA games. I guess I don't feel bad for not knowing him.) 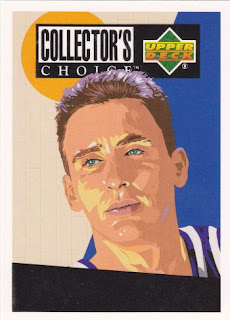 418 - Bobby Hurley Checklist (Hurley was the #7 overall pick in the 1993 draft by the Kings. I won't mention who else they could have taken as Hurley's career was pretty much derailed before it got started by a horrific traffic accident during his rookie season.) 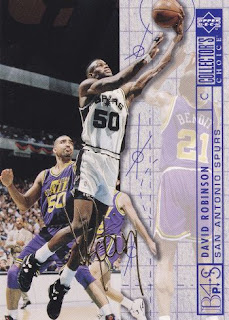 395 - David Robinson Blueprint For Success Gold Signature (This actually seems to be a one-per-pack parallel as there's a gold fake-o signature on the card which isn't present on any other card in the pack. Robinson is the biggest star of the pack by far. Robinson was the #1 overall pick in 1987 and spent his entire Hall of Fame career with the Spurs, getting the nickname "The Admiral" even though he was no more than a Junior Grade Lieutenant in the eyes of the U.S. Navy. That's what you get for going off and playing a civilian's game. The Spurs could have taken Scottie Pippen or Reggie Miller, but you'd be hard pressed to argue with taking Robinson even though they had to wait a couple of years for him to suit up. Incidentally, my Portland Trail Blazers drafted the following players in the first two rounds of that draft: Ronnie Murphy, Lester Fonville, and Nikita Wilson. They combined to score 55 career points in the NBA.) 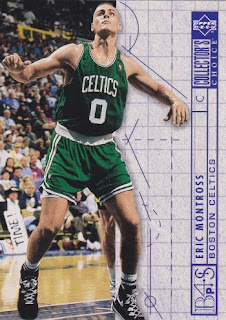 373 - Eric Montross Blueprint For Success (Did anyone ever call him Eric Monstrosity? He was the 9th overall pick of the 1994 draft by Boston and was picked ahead of Eddie Jones and Jalen Rose in a pretty weak looking field.) 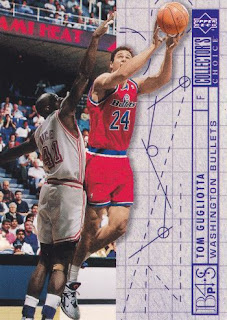 398 - Tom Gugliotta Blueprint For Success (Gugliotta did not have a terrible career, but I seem to remember the 1992 Draft - he was pick #6 - as being completely loaded. This draft was the first ever to be held outside of New York and happened to be in Portland. I believe that coincided with the Basketball Tournament of the Americas, which effectively was a tuneup for the "Dream Team" USA Basketball squad before they were sent out to destroy the Olympics. The Bullets could have had Latrell Sprewell or P.J. Brown here, but you can't really argue with the pick all that much, even in hindsight. It just wasn't a Hall of Fame-worthy draft outside of some guy that still plays center and likes to shoot his mouth off.)

Weren't the gold sigs like 1:36 packs or something? The silver ones were one per I think. That probably makes up for the turd-tasticness of the rest of the pack right?

Oh, and those Cavs jerseys are probably my favorite basketball jerseys ever. I'd love to get a patch card from that era's team, though I don't know that there were any notable players from that era of Cavs basketball.