Ok, so it seems like all I do on this web log is complain about too much money for too few cards. So, you might thoughtfully ask, why would I buy a pack of 4, yes, 4 notoriously lame college football cards for 3 bucks if not to complain some more? You would have a point. In fairness, I was doing a little tour of the draft pick cards, buying a pack of UD Draft, Bowman Draft and this waste of foil board and the other two purchases weren't nearly so bad. They just happen to already have been posted to APTBNL. In further fairness, in this kind of set I'm really only looking for Patriots draft picks and former Wisconsin Badgers. I got two Badgers in the Bowman so that was a big success. This, however... 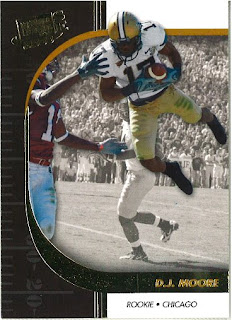 Ok, so a nice photo. And I guess I sort of like the 10th grade, "Hey! Look what my digital camera I got for Chanukah can do!" effect of graying out the backdrop. A real lot of dead space, however. And as much as it's useful to know that the bears Drafted Deej, the colorless, lifeless font is a bit of a downer. However, the Bowman and UD don't even have that info. As for DJ Moore, he's got a two-line wikipedia entry and that's about all the research I'm up for. 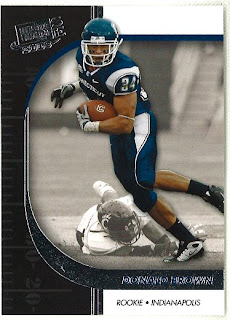 Well, he's a first rounder, so that's not bad. He'll also be at least moderately famous as I'm pretty sure he'll be driving fantasy players and particularly Addai owners crazy this year. Photo is good again, but I still feel like the who set is straight out of the "Sports Memories" section of an above average high school yearbook. You know, with the heading in Comic Sans and a Green Day lyric squeezed in there somewhere? Seriously, look at this card and play "Time of your Life" in your head for a moment. Now try to stop it if you can. If not, I am really sorry. 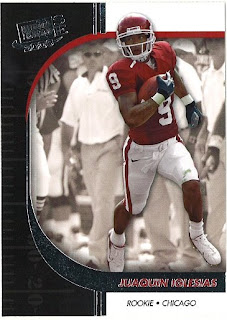 I LOVE the guy in the glasses just to Juaquin's left. If you know who that is and can help me get him to sign this card, I'll get you a great prize. Again, solid photo. 3rd round pick with fantasy potential given the desperate WR situation is Chicago and Cutler's functioning arm and semi-functioning brain. Comes up second on the suggested searches if you type "Juaquin" into google. The rest, including the first, assume you've misspelled "Joaquin," which Juaquin's mom likely did. 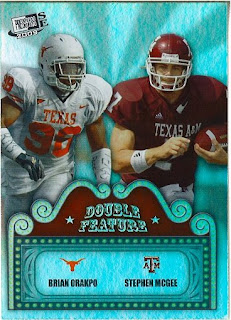 Looks as gaudy in person. So they're rivals, kind of. Or used to be. I guess they go together. This is an insert, which puts me one card further away from never, ever even for the slightest moment considering the outside possiblity of making this set.

That guy on Juaquin's left is Jerry Schmidt I think. He's the strength and conditioning coach at OU.

With it's two bears rookies, that pack is a winner to me. :D