Upper Deck First Edition, that’s what! No frills, no high dollar inserts, but no high dollar price tag. I know you’ve all seen those, but maybe you’re “above” the bargain packs. It’s the less glossy (and less valuable) ugly step-child of regular issue Upper Deck. If you’ve busted a few packs of these yourself, good for you! You’re a smart shopper. If you’re too embarassed to be caught with First Edition – or its Topps equivalent, Opening Day – keep reading and see what you’re not missing. 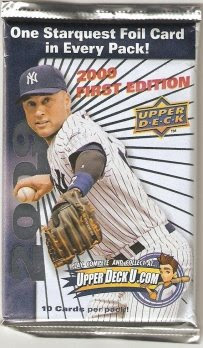 I have to apologize: I filed these cards before noting their numbers. In a way, the watered down pack break is appropriate.

Jason Varitek, Jose Valverde, Matt Garza. As you can clearly see from the first three cards in the pack, there’s no gold foil, no gloss, and “First Edition” printed on the left. Couldn’t Upper Deck have let us pretend these were real cards?

Jered Weaver, Jay Bruce, Brandon Phillips. Jay Bruce is a promising young prospect, so his First Edition card could be worth three figures some day. Of course, by that I mean over a dollar, but that’s what constitutes three figures in my world. 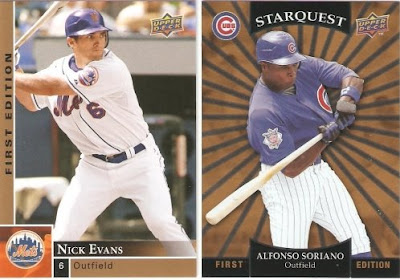 Ubaldo Jimenez, Gil Meche. Nice shot of the Royals' throw back jerseys. Not sure why they didn't go all the way and include retro pants, too. 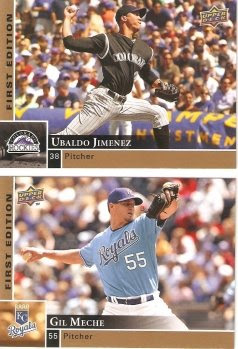 And of course, a promotional “Upper Deck U” card. 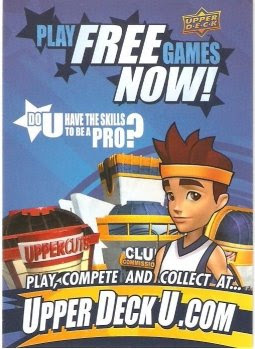 You get what you pay for, but at least the pack didn’t break the bank. Now you know – if you’re on a strict card collecting budget, perhaps it’s best to save for something a bit higher end than First Edition. On the plus side, the no-gloss fronts (it feels like early ’90s Score) are perfect for TTM signatures. Pros and cons, I suppose.