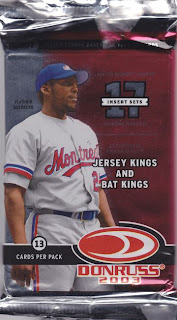 Here's a pack of 2003 Donruss "Hobby" found at Target last winter in the markdown box. I was just excited to see a Donruss baseball pack of any kind. 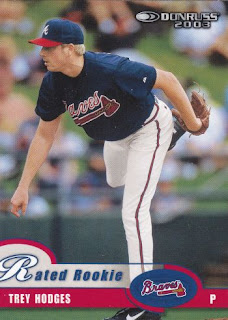 33 - Trey Hodges Rated Rookie (If Donruss/Panini/whatever ever gets an MLB license again, they should bring back the classic late-'80s Rated Rookie logo. Nothing else looks right.) 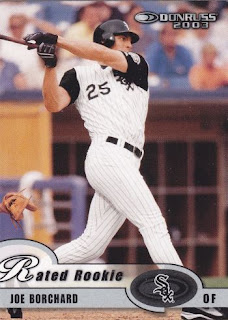 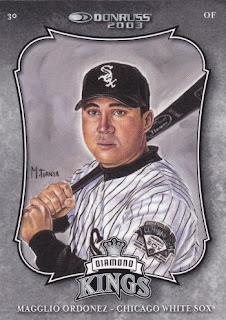 16 - Magglio Ordonez Diamond Kings (This is a Diamond Kings card in its classic form: a subset card in the base set. At some point they decided to get crazy and make Diamond Kings insert cards and eventually made entire premium sets of "Diamond Kings". Also, Magglio's face looks pretty silly, which is about part for the course. You can see that Dick Perez did not sign this portrait.) 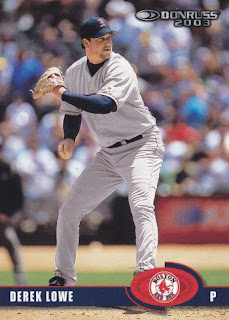 102 - Derek Lowe (I no longer can see or hear his name without thinking about this.) 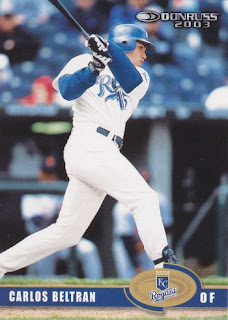 137 - Carlos Beltran (Someday Kansas City should assemble an all-ex-Royals all-star team. Raul Ibanez and Johnny Damon would be up for it, right?) 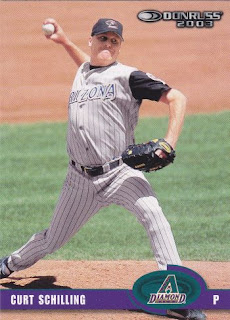 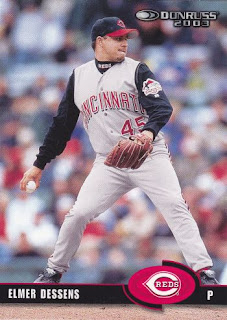 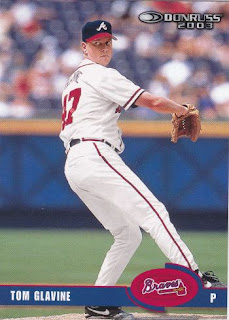 238 - Tom Glavine (I would be really upset right now if I was a Braves fan. But I really don't like Nate McLouth, so...) 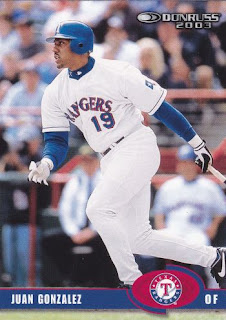 207 - Juan Gonzalez (It's weird to think that this guy went to spring training with the Cardinals last season.) 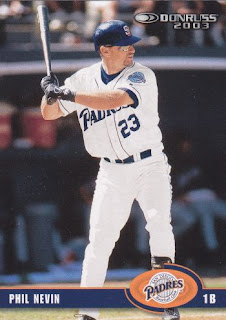 367 - Phil Nevin (Fun facts about Phil Nevin, according to Wikipedia: "Nevin was selected as the first pick of the 1992 Major League Baseball Draft by the Astros. Derek Jeter was selected sixth in the draft; Hal Newhouser, a scout for Houston at the time, quit the franchise over the decision not to pick Jeter") 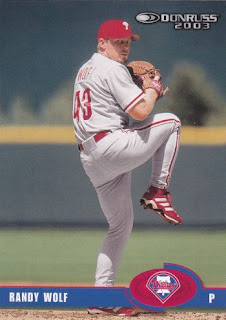 355 - Randy Wolf (One of my co-workers kept saying the word "creek" last night, pronouncing it something like "crick." I wonder if she would call Randy "Woof".) 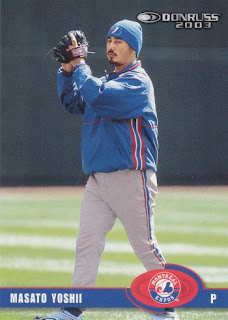 Email ThisBlogThis!Share to TwitterShare to FacebookShare to Pinterest
Labels: 2003 Donruss

Add Jermaine Dye and that's one heck of an outfield on the all ex-Royals team.

17 cards in a pack, those were the days.

Wow. I've never seen this set before. It's beautiful. There's one more to add to the "Buy of Box of this Someday" list.

It's a pretty decent design. I am a sucker for full bleed photos.