Written by Motherscratcher at 9:55 AM
So I'm in the store the other day picking up some of the regular stuff that people get at the store. As usual I detour down the card isle. In addition to picking up a Topps cereal box I decide to get a few of those weird packs next to the baseball cards. There is all of the Japanimation stuff that I don't understand so I go for a few things that I've heard of.

The first of those packs is right here. I picked this because I'm an expert (or I used to be) on Super Mario Bros. How much different could it be now from the stuff I remember about my nintendo? As you will see, I was clearly out of my depth here. I have no idea what in the world is going on.

But, it's shiny. And it looks like something designed by Ozric Tentacles. (Check out Chewier)* so that's kind of cool.

*I had the pleasure of meeting the Ozric guys at the Beachland Ballroom in Cleveland a few years back. They did not disappoint. They seemed every bit as drugged up as I'd imagined. And yes, I just ripped off Posnanski's posterisks thing. 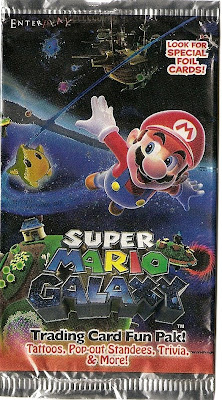 Before we start, a few thoughts on the wrapper. I am instructed to "Look for special foil cards." They are 1:6. Noted. Also, as we all know, things are much more fun when misspelled. This "Trading Card Fun Pak" does not disappoint. 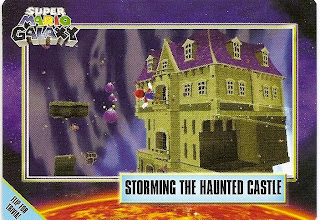 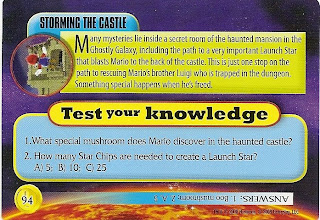 This is apparently some spacecastle or something. Looks kind of cool I guess. The back informs us that Luigi is trapped in the dungeon. Typical. Luigi was never really the brains of the operation.

I did test my knowledge as instructed on the back. I found myself lacking. 5 Star Chips seems like an awfully small number to create a launch star, but nobody asked me. 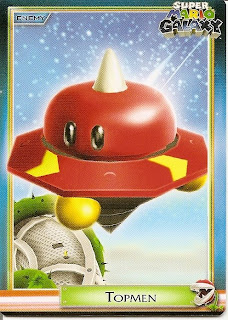 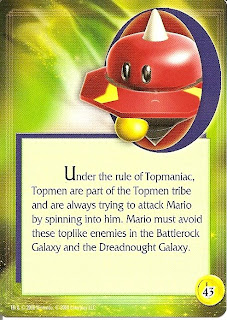 "We have top men working on it right now."

I think I understood more about Topmen before I read the back. 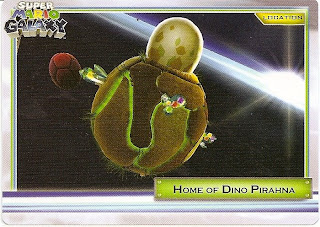 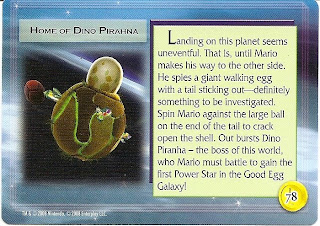 Looks like a crappy place to live to me. Or maybe happy. It looks like it should be part of the Zoloft Galaxy. The little red thing looks like a selective seratonin reuptake inhibitor. This would arguably keep people full of free seratonin so they can bounce around happily from cloud to cloud. Doesn't really sound so bad when looked at that way.

The back is another bunch of nonsense about a "giant walking egg with it's tail sticking out." Whatever. 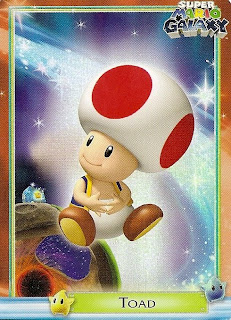 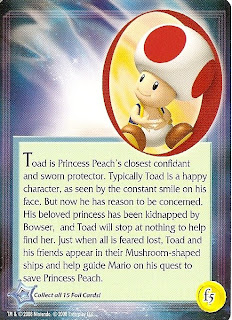 The back tells me to collect all 15 foil cards! I will not. 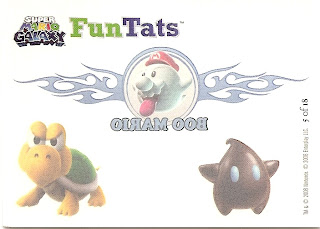 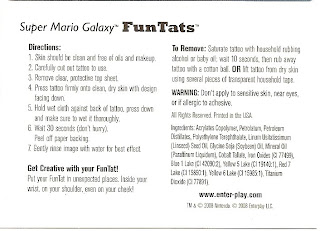 I got 3 tats on my card. A little pissed off turtle, a "Boo Mario" that looks like Mario's crazy dead uncle or something, and a turd with blue eyes.

Directions on the back. One thing you are directed to do is "Get creative with your FunTat! Put your FunTat in unexpected places."

(I hope someone gets that) 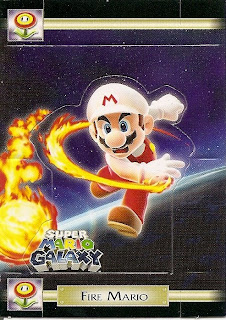 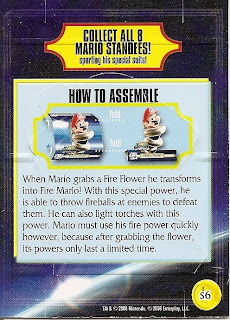 This is some sort of thing that you can fold to stand up. Not sure of the point to this.

Overall, I guess this is OK. I'm not sure what to make of it, to tell the truth as I was obviously lost.

One good thing is that the corners are pre-rounded so that they can't be dinged and impact the book value.

This is available for trade. What you would have to trade is the time it takes to email me or comment here and ask me to send them to you. These cards should really be in the hands of someone who is willing to got the extra mile to collect all 15 foil cards. I'm not that person.

The best thing about these cards is it gave me an excuse to link to Ozric Tentacles.

*The goal is to have the front/back of the vertical cards be side to side and the horizontal cards be top to bottom. I have no doubt that I have failed misably

This is one of the funniest things I've ever read haha.