Written by Ben at 12:53 PM
With Score complete and Fleer getting close to completions, here's the lastest in my quest to collect the four major sets from 1988. Be sure to check out the rest of the box break daily at 1988 Donruss. 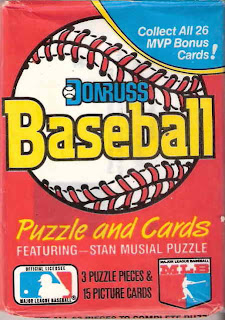 This should be fun... 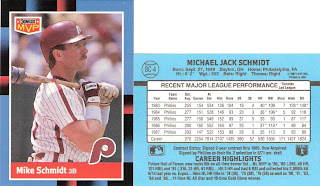 BC-4 Mike Schmidt - The little blurb points out that Michael Jack Schmidt is a future Hall of Famer. 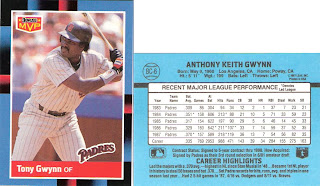 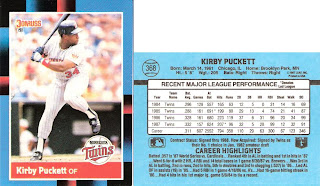 368 Kirby Puckett - One of my all time favorites, and a player that was taken away too early. I've said it before, but had he not been forced out of baseball, what could he have done with another seven or eight years? What he did in his short career was good enough for Cooperstown though. Rest in peace Mr. Puckett.

With this card we have something pretty rare too: A great photograph from 1988 Donruss! 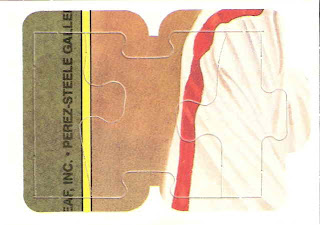 So there's pack one. The first thing that is readily apparent in opening these cards is the overall lack of quality in the cardstock. 1987 Donruss was better all the way around. It had a better design, better photography and better cardstock. 1988 was a near failure and Donruss wouldn't release another quality set until 1992 (and even it's pretty boring).

Again, come read 1988 Donruss for a pack a day break of this box. I've got some good ideas for this break, so it should be a fun read.

Email ThisBlogThis!Share to TwitterShare to FacebookShare to Pinterest
Labels: 1988 Donruss

Three HOFers in one pack!

That Puckett card is the best photo I found in the set. The Schmidt card continues the trend of him getting crappy cards from all the companies. There are so few action shots of him--it's ridiculous.

This Schmidt card is a lot better than his 1981 Topps card.

Back in January I ripped probably the best pack 1988 Donruss ever created... here, but this one with three HoF'ers is pretty spiffy too.

As for the rest of this box break, I've decided to scan and post every card from the pack, so it should be a fun trip through time.