Written by Steve Gierman at 1:49 AM 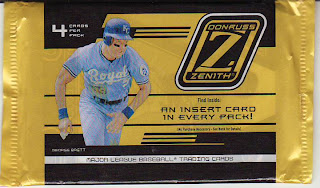 I'll make my debut here with something picked out of the Target bargain bin; 2005 Zenith!

With George Brett on the pack, how can I go wrong? An insert card in every pack! Hey, sounds like I just hit the proverbial jackpot. Hooray!

With only four cards in the pack, this should be short and sweet. Let's begin! 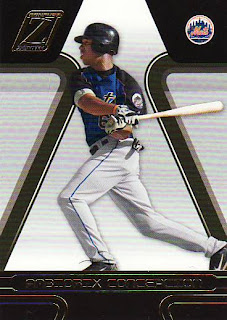 The only reason that I recognize the name is the first name. It's not a common name in baseball, or in my daily life, so it tends to stick out. I'm puzzled as to why I know the name but I can't think of anything other than the unusual name.

A quick search of Ambiorix's stats reveal that 2009 is his eighth year in the minors and he just showed up at AA in 2008. After seven years in the Mets organization, this year he finds himself in the Orioles minor league system. I see huge money in my future if I hold onto this card. 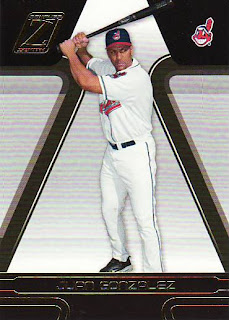 Juan was playing in 2005? Wait, he was playing with the Royals in 2004? I remember taking in a game at Comerica Park in July 2000 against the Astros. The Tigers lost and Juan was on the disabled list.

Juan only played 33 games with the Royals. Why don't I remember him on the Indians? Maybe it was because he only played in one game for one at-bat for the Indians. On May 31, 2005, Juan grounded out to third base in Minnesota to end the top half of the first. In the bottom of the first, Casey Blake replaced Juan in right field start the half inning. Wait... WHAT??!!! Why? 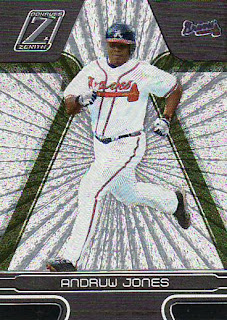 Wow! Shiny! I think dayf has hit the jackpot! This card comes from when Andruw led the NL in home runs and RBI. I think 2005 is what we would call his peak. That's when Atlanta should have probably entertained serious offers. 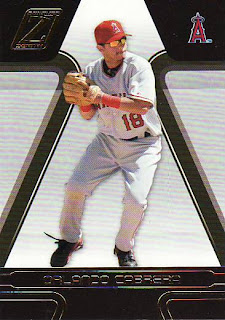 He split time with the Expos and the Red Sox in 2004. He was on the Angels in 2005. Since this card, Orlando was on the White Sox and currently the Athletics. Is there a problem with Cabrera? That's a lot of teams in such a short period. Being a White Sox fan, I have an inkling at what the answer might be and it's complicated. Let's leave it at that.

Was this the best pack that could have come out of this? Probably not. Still, it was a fun experience and I did get the promised parallel. There's a lot of disappointment in this pack, but that won't spoil the party. It's still fun to rip open old wax.

Email ThisBlogThis!Share to TwitterShare to FacebookShare to Pinterest
Labels: 2005 Zenith

You probably know the name because of this guy:
http://www.baseball-reference.com/players/b/burgoam01.shtml

who saved a few games for the Royals last year... turns out fantasy baseball IS good for some things.

That's where I know the first name from! Thank you.

There were two Ambiorix's in the Mets system in 2007? Weird.