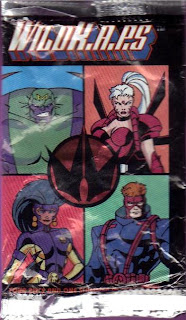 Here is a tie-in you don't see everyday... Evidently, the creators behind an animated TV series called "WildC.A.T.S." thought it would be cool to hire Upper Deck to produce pogs based on the upcoming show. And, to keep things cute, they called these little round discs "WildKAPS..." Get it? Like KATS but with a "P" because, well, these are "caps..." I know, the cleverness level just blew the roof off the place.

The only "card" in the pack (presumably to give some stability to the pack and keep all the KAPS from clanking around inside the package) is a checklist/instruction card. Basically, everyone uses the same number of caps. All caps up-for-grabs go into a stack, graphical side down. Player 1 bounces the slammer (see below) into the stack. Any caps that land face-up, the player keeps. Everything is reset, and play continues. It's like flipping for cards using a 1/1 printing plate as the 'slammer...' :-) Since I know NOTHING of the series, all I can say is that poor Jeremy here looks like he's missed a few hundred meals. He's in good spirits about it though - he's giving two thumbs-up to somebody... 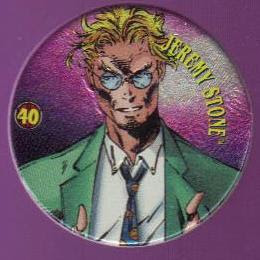 Next, we have Warblade and Maul. I don't know if they are like a Jekyll and Hyde thing or if they are attached at the hip, or maybe star-crossed lovers. 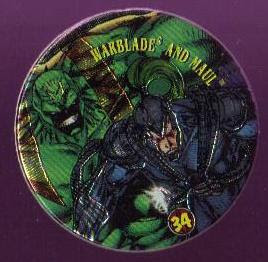 Oh, next we go all "funky-spelling" with Daemonite, which in today's world would translate loosely to "hosed Linux installation." 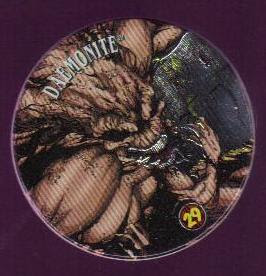 And, the last playing piece that is not metallic (these are all cardboard with foil coating) is Spartan with his flaming hands of doom... Or of justice... I don't know if he's good or bad, I'll have to leave that to Santa... 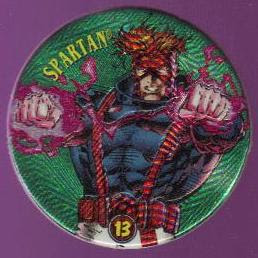 Below is the slammer. Not, not the place they throw you for buying something like this, but rather the heavier, metal 'pog' the players chunk at the stacks of discs. 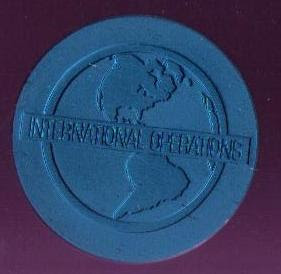 I never understood products like this, even at the time, that pretended to have a following. Let's see if I remember the timeline of events accurately.

- Frustrated by a lack of recognition (and share of the $$$), these artists (like Todd McFarlane and Rob Leifeld) "rebel" against the conventional industry, and form their own comic label, Image.

- Now lacking any thoughtful editorial controls on their talent, they indulge their every artistic whim.

- With the possible exception of McFarlane's Spawn character, every other book series from Image does a good job of portraying firm breasts and nifty fight poses, but compiles character development seemingly from half-completed Mad Libs.

- Outside of slavish collection of "#1" issues of these books (like rookie cards for comics nerds), nobody really cares about any of these kiddie-pool depth characters or books.

- Based upon projections from the big sales of these #1 issues, business interests line up like meat dominoes to make things like animated series, character fruit-by-the-foot, and cards and POGs out of recycled art.

- Within five years, nobody cares about any of these characters, comic books, or artists, with maybe again, the exception of McFarlane and Spawn.

- In 2010, even the #1 issues are worth less than a whole house of junk wax, from ironically, about the same era.

This basically seems to be a 1990s version of lame 1980s toy properties that created cartoons mainly as lengthy commercials for the toy lines (GI Joe, He-Man, Transformers, M.A.S.K., Jayce and the Wheeled Warriors, etc.).

The worst part is that at least in the 1980s, people cared about Joes, Autobots, and Man-e-Faces. No love remains for the ginger-headed spawn of the 1990s.