Written by Joe S. at 10:03 AM
Words can't express how much I love Collector's Choice. Not sure what got me hooked, probably the price or fun, easy to pull inserts. Or maybe because it was called Collector's Choice... and I, too, was a collector. How could I NOT choose it? This particular pack was just sitting in the dollar bin at my card shop, waiting for a young (or old and cheapskate) collector to come along. 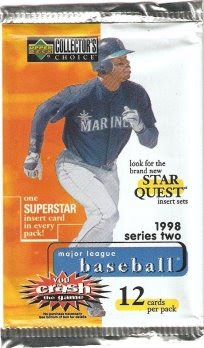 The wrapper promises one superstar card in every pack! I can only assume this means that the rest of the cards will be TTM fodder. Also, I’m told to look for the brand new Star Quest insert sets… plural! That screams parallels, no?

I was right – parallels galore. Let’s see what I got:

#301 Willie Blair, #267 Checklist, #272 Alex Rodriguez. Finally, a “good” card! ARod’s card is somewhat retro looking because it’s part of the “Golden Jubilee” subset – a 50 year celebration of card collecting. The checklist card shows the Mini “bobbing head” (bobble head must be trademarked), of which I own both the Nomar Garciaparra pictured on the front the the Ripken on the back. It says that if I collect them all, and with some assembly, I can have an entire All-Star team on top of my desk or table! That’d fun, but then they won’t be worth anything. What a dilemma… my own All-Star team, or an investment to retire with…

#306 Chipper Jones, #422 Gabe Alvarez, #SQ18 Juan Gonzalez Star Quest. The Jones must be the superstar insert, because it’s a base and looks different than the others. Hindsight shows that Gabe Alvarez failed whatever rookie class he was enrolled in, and the Star Quest insert was only of the one-in-every pack Single variety.

Not horrible for a dollar. A bunch of guys I’ve never heard of, but two likely Hall of Famers in Arod and Chipper.