Written by LongFlyBall at 10:52 AM
Back in 1989 someone had the idea that what the world needed was a Senior Baseball League that featured some ex-major leaguers and some just-short-of-the-grade professional ballplayers. There were enough players willing and able to field eight teams in two divisions. A 72-game schedule was drawn up and a baseball history footnote was born.

Also, back in the '90s everyone and their brother, sister, mother, uncle, father, aunt, cousin (you get the picture) collected baseball cards. A company out of Lynnwood, WA decided that they wanted to produce a series of cards to chronicle the Senior Baseball League. And thus was born; 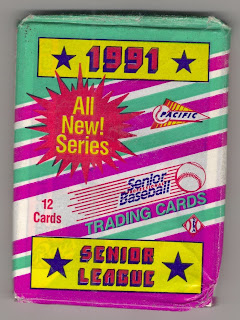 The cards themselves had a decent enough design and the photography was just as good as anything being produced at the time. The glossy fronts were standard, however the choice of colors for the design definitely date the set, especially the teal-coloured card backs. The information presented on the backs provide a great history lesson on each player, most of whom only die-hard fans will recall.

Lets get to the pack, shall we?

First out of the pack is LHP and 10-year MLB veteran Pete Falcone, Dan Rohn, a 3-year MLB player whose first two hits in the majors were triples and former Royal, Giant and Phillie RHP Renie Martin.

Next we have the San Bernardino Pride coach Tom Thompson, a couple players who combined for 26 seasons in the majors and 226 HRs, Cesar Cedeno and Pete LaCock and a former BoSox pitcher Reggie Cleveland.

Eddie Milner once stole 41 bases in 1983 and spent 8 years with the Cincinnati Reds, Art De Freites spent 2 seasons with the Reds, and Bud Anderson pitched 64 times with the Cleveland Indians.

The last 3 cards feature a Father/Son pairing, quite appropriate for this weekend, of the Jr. and Sr. versions of Ozzie Virgil. Ozzie Sr. was the first Dominican player in the Major Leagues. The Sun City Rays management/coaching staff are featured on one card with Jim Marshall, Dave Milton and Fred Stanley. The last card featured so much information in such a limited space that I felt it necessary to get a magnifying glass out, thanks for that humbling moment Pacific. Kan Kravec spent 7 years in Chicago and played on both the north and south sides.

I purchased 3 packs of these from the bargain bin of a regular stop on my hobby shop tour. the other two went out as add-ons to a couple packages that were sent to some trading partners this week. Hopefully they enjoy them as much as I did. I like the sets that teach you something or give you something you may not have known before you opened them.
Finally, I wanted to post the back of the Kravec card as some way of justifying to myself that it is indeed the card and not me getting old....lol. 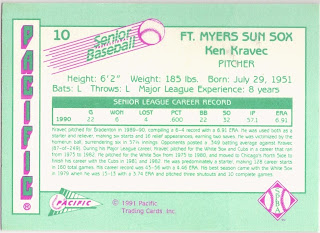 I hope you enjoyed this pack crack.

Some of the team logos are pretty awesome. TROPICS!

Love the use of the "Bad Mother Fucker" font.

This was actually Pacific's second set for the SPBA. The previous years cards are a lot easier to find. There's actually a Jim Rice somewhere in the 1990-91 set.