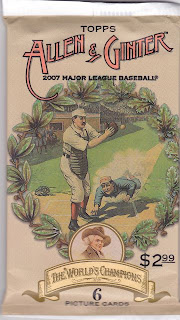 I picked up a couple of 2007 Allen & Ginter retail packs recently at a card show from a guy I've dubbed The Retail Guy for $3 a piece. This stuff seems to be very scarce to me, as I've only seen unopened packs two times in my life, and both times it was being sold by the Retail Guy. The Retail Guy only sells unopened retail packs and boxes, usually for a discounted price. I didn't complain about paying full price for the two 2007 A&G packs, though, and they were the last two packs in the box. I want every card I can get my hands on from the 2007 and 2006 sets, but I know I'll never truly be able to afford to collect them.
Here's the first of the two packs. 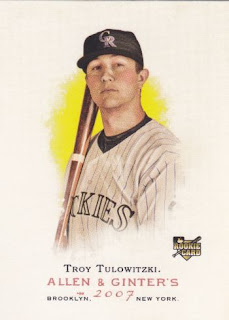 75 - Troy Tulowitzki (RC) (Tulo had a nice start to his career, but he's struggled with injuries and consistency since 2007.) 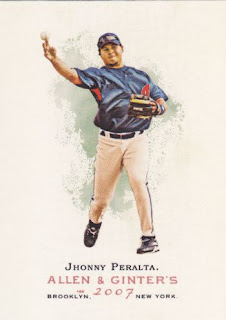 17 - Jhonny Peralta (I cannot resist pronouncing this guy's name Juh-hawny because it's just so wrong looking.) 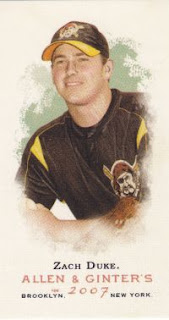 AGR-BZ - Barry Zito Relic (Yep. Barry Zito Pants sealed in a tropical looking frame. It's true because you can see it on the internet.) 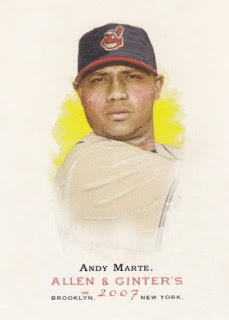 65 - Andy Marte (Wasn't this guy a big prospect at some point for someone?) 84 - Casey Blake (The Dodgers looked good for picking up Blake late last season, but they're looking even better right now for extending his contract.)

Awesome pack. The only place I've ever seen any '07s were in those 3 packs for $5 thingies from K-Mart. I too got a hit in the one I bought. In fact, I don't think I've ever actually seen an '07 pack get opened on the internet that didn't have a hit in it (4 for 4 I think). As far I know, all they're all like that. :P

That stupid Rookie Logo, destroys the asthetics of Tulo's card