Written by matt. at 7:31 PM
Price: $4 from the creepy store in bad part of town.
Cards: 5
Level of regret of purchase: 83%
Cards available: If I can find them, you can have them.

So I'm not sure what these are exactly. They're "authentic," which is good, cause if someone's faking these that's really a shame. Then again at about a buck a card maybe that's the business to be in. I'm guessing people buy these for autos and that I was probably a sucker for pulling one out of an already open box. They look kind of ok though. 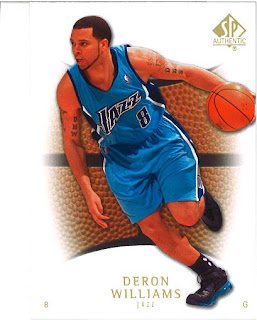 Ok, so they're kind of classy looking and I like the way the basketball kind of blends into the ether, although it of makes me think Deron is emerging from sort of evil womb which, by the way, is a scene I'm totally writing into my script for Aliens vs. Monstars.

A quick word on powder blue: Works for college hoops, works for baseball, works for football, works for well, anything would work in this case but in the NBA it just strikes my as kind of kitschy and lame. I have no real defense for this claim except that Deron just looks sort of goofy here and I'm blaming the clothes. 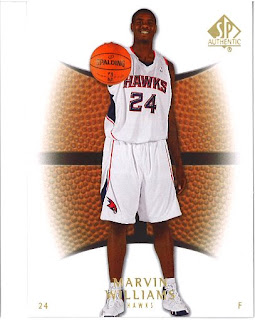 Let's see, we've got a Williams connection so there's one. A powder blue connection, there's two. And do we have a "good use of a top 3 pick connection"...no, we do not.

At the 3: Ricky Davis 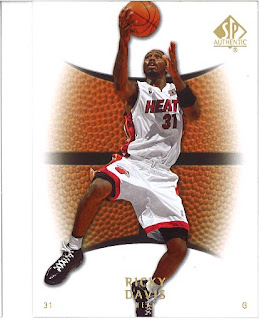 I'm a Celtics fan so I hate Ricky Davis cause I associate with pure losing for the most part. But, yet, I kind of love Ricky Davis. 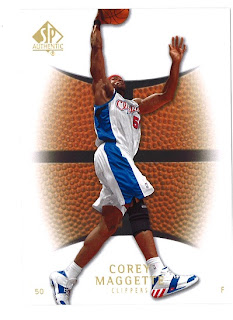 Probably the most points for the worst actual contribution in the league, which, by the way, yes, is a nice Ricky Davis connection. 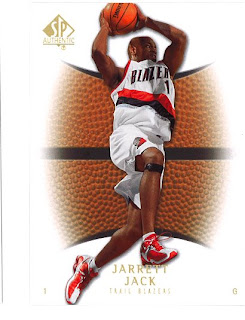 A sneaky good fantasy player. I was going to say that the action shot look a little hokey in this product but then I reexamined the Marvin and, well, I can see UD's dilemma.