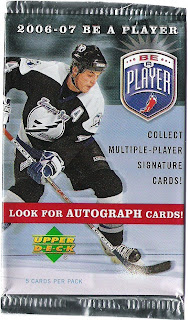 Here's a $5 hobby pack of hockey cards from Shopko. Hope it turns out better than the other $5 pack I bought from there (which will show up here eventually). The pack says look for autograph cards. Okay then, if you insist. 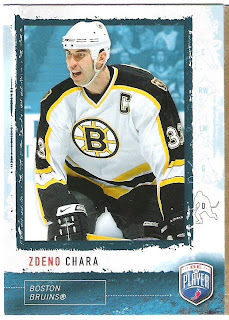 210 Mark Stuart (Bruins) Rookie #'d 636/999- Naturally, both this and the next card had a dinged corner, and were the only two damaged cards in the pack. 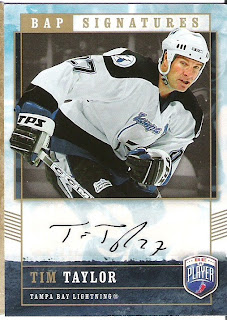 TT Tim Taylor (Lightning) BAP Signatures- The Tool Man! Not the prettiest 'graph, but at least it is one. It appears he included his number on it. That was nice of him. A little personalization is always welcome. The auto is on a sticker if you can't tell, but being clear, it is un-intrusive and looks okay. 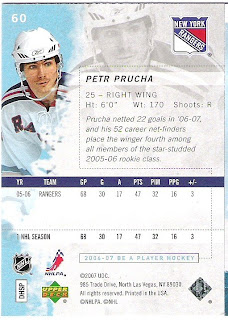 60 Peter Prucha (Rangers)- Here's what the back of the cards look like. Simple and clean, and I like the picture-in-picture effect (though it is the same one as is on the front). The rookie gets a headshot from the front on the back too, though the design is different.

Is net-finders common terminology for goal scoring, hockey fans? It sounds really weird to me. 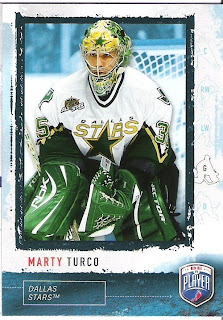 19 Marty Turco (Stars)- Really nice looking cards. I wouldn't mind getting more of this if I actually collected hockey cards in a serious way. The Blackhawks in the set I could go for at least.

That was a nice pack, a numbered rookie and an autograph (only my second hockey sig). I don't know for sure, but does BAP have an auto in every pack? At any rate, it ALL looks good to my eyes. I am most pleased... though I suppose my only real use for these is as trade bait. So, uh, shoot me an email if you want to trade.

Email ThisBlogThis!Share to TwitterShare to FacebookShare to Pinterest
Labels: 2006-07 Upper Deck Be A Player Hockey

no. net finders is NOT a term hockey fans use.
People who know nothing about hockey, but are paid to try and make it hip to the youngin's maybe.
but not for hockey fans.

Thanks for the knowledge, Captain. Think "net-finders" will ever catch on?

Yeah, I don't know much about hockey either, Priceless. The only guy I was really aware of is Turco, the apparently Chara is pretty good.

Yes, BAP is one auto a pack.